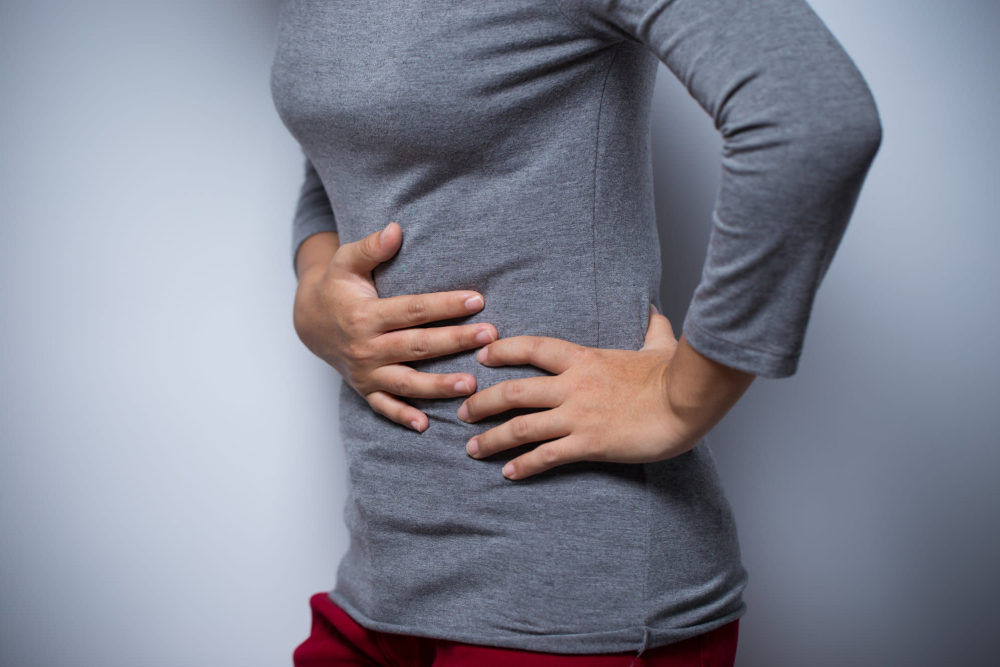 A lot has been said about leaky gut and gluten today, and in this post, I will help you connect the dots between gut health, gluten, celiac disease, and everything in between. This post contains affiliate links. Please see my disclosures.

The gut microbiome is something that researchers and doctors are finally taking seriously. Cutting edge research is confirming what holistic practitioners, and Hippocrates, the father of modern medicine, have known all along: All disease begins in the gut.

Your gut bacteria are diverse and plentiful, and they comprise about 1 to 3 percent of your body mass (or 2 to 6 pounds of bacteria in an average 200-pound adult), according to the Human Microbiome Project.

And while many people think of “bacteria” as a bad thing, the truth is that diverse gut bacteria is an essential ingredient in maintaining good overall health. In fact, good bacteria is essential for the following reasons, according to the Human Microbiome Project:

Many experts say they believe (with good science behind it) that if you change the composition of the bacteria in your gut, you’ll not only be able to create more healthy outcomes, but also you’ll prevent many devastating diseases from surfacing in the first place.

In this article, you’ll learn about gluten’s role in leaky gut, as well as other contributors to intestinal permeability. You’ll also learn some simple changes you can make to achieve optimal gut health in your own life.

What is Leaky Gut?

Leaky gut, also known as intestinal permeability, is a condition where food, bacteria and other toxins escape the small intestine and “leak” into your bloodstream.

Your intestinal lining covers more than 4,000 square feet of surface area and forms a tight barrier to prevent foods and other particles that move through your digestive system from getting absorbed or leaking into your bloodstream.

When there are breaks or tears in the intestinal lining of the small intestine, undigested food particles prematurely penetrate the barrier wall (mucosal lining) and make their way into your bloodstream where they can trigger inflammation and poor digestion and disease.

How Does Gluten Contribute to a Leaky Gut?

A lot of research suggests that gluten contributes to a leaky gut in one of two ways:

Diagnosing celiac disease is a challenge for many practitioners, mainly because celiac disease presents itself in a slew of symptoms, with a large number of those symptoms having nothing to do with the digestive system. In fact, three million people have celiac disease in the U.S., but a whopping 97 percent of those individuals don’t know they have it according to the Celiac Disease Center at the University of Chicago.

If you have a leaky gut, and suspect it might be caused by celiac disease, talk to your doctor about getting tested via a simple blood test. You also can order an at-home celiac disease test without a doctor visit, just be sure to discuss the results with your doctor. (Read: At-Home Celiac Test: Is It Reliable?)

If you have celiac disease, the only treatment option is life-long adherence to a gluten-free diet. Gluten is a protein found in wheat, rye, barley and sometimes oats, and can be challenging to avoid. (Read: What Is Gluten?)

If you’ve ruled out celiac disease, gluten may still be the source or root cause of your leaky gut. Why? Simply put, gluten is a difficult food for humans to digest.

Researchers found that gliadin (from gluten) is resistant to complete digestion by the protease digestive enzymes the human body makes naturally.

Another study, which you can read more about in this article, found that gluten caused an inflammatory response in all humans who ate it regardless if they had celiac disease.

While many people feel fine after eating gluten, there are some 18 million people in the U.S. who suffer from non-celiac gluten sensitivity or gluten intolerance. Some of these individuals have been tested for gluten intolerance with the currently available diagnostic tests, many of which haven’t been reliably backed by science (yet). Others have identified gluten as an issue, either through food sensitivity testing and/or elimination diets.

Ashamedly, a lot of doctors do not consider gluten intolerance as a “real” disorder. However, one study by a team of researchers in Italy may have validated non-celiac gluten sensitivity, helping millions of people see its not just in their heads.

These researchers found that individuals with gluten sensitivity harbor high levels of an inflammatory protein called zonulin. This is the same protein found in high levels in patients with celiac disease.

In 2000, Dr. Alessio Fasano and a team of researchers first discovered zonulin; they found that zonulin helped to regulate the gut’s leakiness by opening and closing the spaces or “junctions” between the cells found in the digestive tract lining. Researchers knew prior that zonulin was triggered by harmful bacteria, and with this research, they found that gluten to be a strong trigger of zonulin too.

Dr. Fasano told NPR, “No human being completely digests gluten. And in a small percentage of us, that undigested gluten triggers the release of [high levels of] zonulin.” He added, that zonulin is important in a lot of illnesses, as many “illnesses link back to loss of barrier function in the gut.”

Regardless, gluten intolerance remains a topic of much debate by today’s medical world, mainly because there isn’t a lot of research that has sufficiently studied this disorder. Do not, however, mistake lack of research with lack of disorder, as millions of people take issue with gluten, and denying this truth without explanation beyond “it’s all in your head” does nothing to validate or remedy the experiences of 18 million people.

Other Triggers of Leaky Gut

It’s important to know that celiac disease and gluten aren’t always the underlying cause of leaky gut. In fact, there are many causes and contributors to leaky gut, including the following:

Diseases: Research suggests that digestive health can be tied to other diseases including Crohn’s, IBS, arthritis, allergies, acne, obesity and more.

Antibiotics: Antibiotics also can negatively change gut bacteria. While antibiotics are necessary and can save your life when needed, be mindful that they not only kill the bad bacteria causing disease, but also they kill the good bacteria in your gut. Excessive or continued use of antibiotics, no doubt, contribute to deteriorating gut health. (If you must take an antibiotic, be sure to take a probiotic supplement for at least one month post-antibiotic. More on probiotics below.)

Excess alcohol consumption: Much research has implicated heavy alcohol usage with poor intestinal health. One study found alcohol can “overwhelm the gastrointestinal tract (GI) and liver and lead to damage both within the GI and in other organs.” Researchers went on to say alcohol promotes intestinal inflammation which can “exacerbate” alcohol-induced organ damage.

Stress: Researchers have long known that stress can lead to unfortunate changes in the gut’s microbiome. This is because stress hormones, like cortisol, damage the gut lining over time. When cortisol is produced in excess, your body’s sympathetic nervous system, or flight or fight reaction, takes over. Blood and nutrients are diverted to saving your life because it thinks you’re in danger, whereas functions such as digestion get tabled until your body thinks the danger (stress) is averted. If you live in a chronic state of stress, it’s likely that it’s coming at a cost to your digestive health.

How to Fix Leaky Gut

If you have celiac disease, you’ve got to break up with gluten for good. I document my experiences breaking up with gluten in my book, Dear Gluten, It’s Not Me, It’s You.

It can become more complicated if you don’t have celiac disease (which you must first rule out via testing) and instead believe you have non-celiac gluten sensitivity or gluten intolerance.

Before banishing gluten from your life, consider getting tested for gluten sensitivity, which I write about in this article.

The other option is to eliminate gluten from your diet for 4-6 weeks, and then slowly reintroduce it. This is called an elimination diet and it can help you uncover hidden food intolerances. I recommend working with a nutrition professional specializing in gluten-free diets to help you through the difficult process of eliminating gluten from your diet.

Unsure of what to eat? Read my list of 200+ Foods You Can Eat on the Gluten-Free Diet and sign up for my free celiac disease meal plan.

You don’t have to take sugar out of your diet forever. Simply eliminate or severely limit your sugar for a few weeks. Give your gut time to heal. Once it’s stronger, you can resume eating a moderate amount of sugar daily without experiencing digestive symptoms.

If you struggle with limiting sugar in your diet, read 10 Tips to Breaking Your Sugar Addiction. And while your in the business of limiting sugar, load up on plenty of anti-inflammatory foods to nourish your gut and whole body.

A great way to accelerate the healing of your gut microbiome is through probiotics. Look for probiotic supplements that contain lactobacilli and bifidobacteria and talk to your doctor about taking a therapeutic dosage (90 billion CFUs or greater). Once you heal your gut, you can reduce your dosage to 30-50 billion CFUs daily for maintenance.

You also can load up on fermented and cultured foods, which are loaded with natural probiotics. Enjoy foods like kimchi, sauerkraut, fermented pickles, yogurt, kefir and my personal favorite, kombucha (fermented tea). These living foods promote healthy gut flora by introducing good bacteria into your belly and helping that good bacteria to proliferate.

Talk to a doctor to help you figure out what’s behind your leaky gut symptoms and then work with a nutritionist to help you heal your gut for good. I encourage you to sign up for my free 7-Day Heal Your Gut Challenge as well.