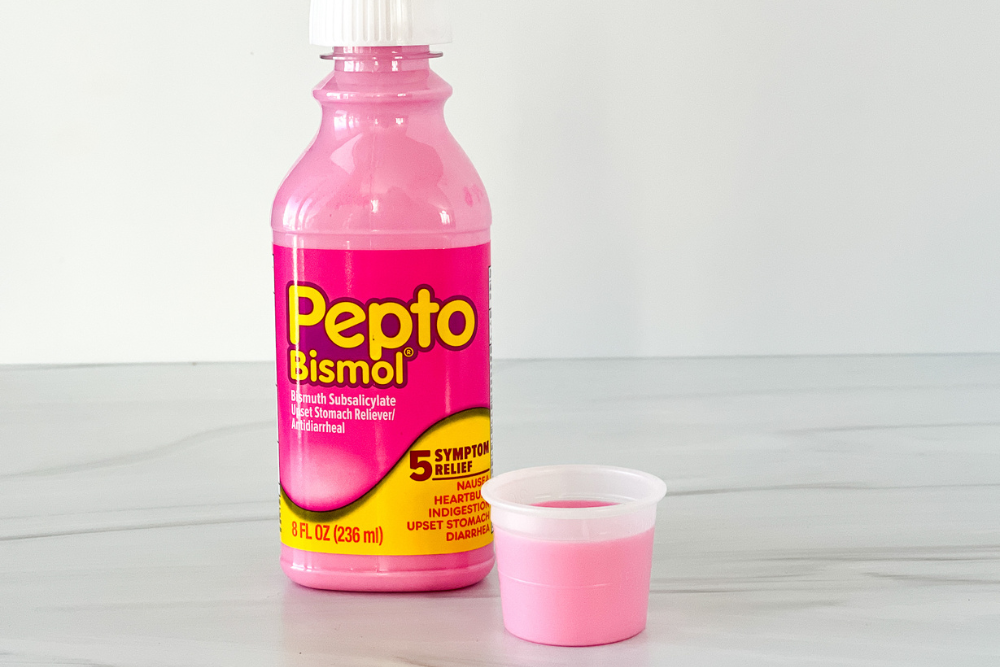 I’m constantly asked if Pepto Bismol and other diarrhea, constipation, and heartburn relief medications are gluten free; after all, the gluten-free community is challenged in matters of the bowels. I’ve got the full scoop on what the mainstream over-the-counter medicine brands say about gluten. This post contains affiliate links. Please see my disclosures.

If you have celiac disease or gluten intolerance, it’s likely you’re no stranger to diarrhea, constipation, and heartburn. Digestive woes can be one of the first signs of a gluten disorder.

Many people in the gluten-free community take medications like Pepto Bismol and Tums to relieve their digestive symptoms. But are these products, which are designed to make you feel better, actually making you sick due to hidden gluten?

Gluten is a protein found in wheat, rye, barley, and sometimes oats, and it’s avoided by millions of people with celiac disease and non-celiac gluten sensitivity worldwide.

In this post, I investigate what the most popular diarrhea, constipation, and heartburn medication brands say about gluten. I also test Pepto Bismol for hidden gluten with my Nima Sensor, a portable gluten-detecting device, and share the results below.

Which Diarrhea, Constipation, and Heartburn Relief Medications are Gluten Free?

Beano contains a natural food enzyme (alpha-galactosidase) that the company says prevents gas before it starts and should be taken before eating beans or other gassy foods like cabbage, broccoli, cauliflower, grains, cereals, nuts, and seeds, to name a few.

Beano doesn’t include information about gluten on its website, but when searching for it at online retailers, I noticed CVS includes information indicating that it’s gluten free. I emailed the company to confirm and received this reply:

“Our tablets are considered gluten-free; however, they do have 16 ppm of gluten per tablet because wheat bran is used as the fermentation media for our Alpha Galactosidase enzyme. The FDA defines gluten free as “any product with less than 20ppm,” resulting in our product [being] considered as gluten-free.”

Would you feel comfortable eating something that contained 16 ppm? I wouldn’t recommend it, especially if you’re using Beano to improve your symptoms, not make them worse.

Gas-X says its products relieve pressure, bloating, and discomfort caused by gas. Its active ingredient is simethicone. The product is not labeled gluten-free, and no information about the product is available on the company’s website. Mylicon contains the same active ingredient. See below.

Imodium is most commonly used to treat sudden diarrhea by slowing down movement in the gut and decreasing the number of bowel movements. Its active ingredient is loperamide hydrochloride.

Johnson & Johnson, the manufacturer of Imodium products, says while Imodium doesn’t contain any gluten ingredients, the company hasn’t tested its final products for gluten and, therefore, cannot confirm any of its products are gluten free.

While Imodium and other brand-name drugs continue to be baffled by whether or not their products contain gluten, the generic brands offer more certainty.

Target’s Up & Up “Imodium,” which contains the same active ingredient, loperamide hydrochloride, is labeled “gluten free.”

Kaopectate contains the same active ingredient, bismuth subsalicylate, as Pepto Bismol. It says on its website, “We do not add gluten to Kaopectate products, but we have not tested for the absence of gluten. Therefore, we cannot certify that Kaopectate products are gluten-free.”

Milk of Magnesia, manufactured by Phillips and owned by Bayer, says on its website that while it doesn’t add gluten to its products, the company cannot guarantee its products are gluten free. It adds that its products are produced in facilities that manufacture or package other items that may contain gluten.

According to the MiraLAX website, it’s gluten-free, sugar-free, and preservative-free, although the product is not labeled gluten free.

The generic MiraLAX from Target’s Up & Up brand, “powderlax,” is labeled gluten free.

Mylicon contains the same active ingredient, simethicone, as Gas-X and relieves gas in babies and children. The company says on its website that its baby gas drops contain none of the following allergens: Nuts, milk, milk derivatives, lactose, wheat, gluten, or sulfites.

In a statement by email, a spokesperson for Nexium recommends that people on a gluten-free diet “check the list of ingredients printed on the pack and follow the instructions available with the product.”

The person also said gluten is not added to Nexium 24Hr Capsule and Nexium 24Hr Tablets during manufacturing. Still, the company “cannot guarantee that minute amounts of gluten or gluten derivatives” didn’t make their way into the product because the product isn’t tested for gluten.

Target’s Up & Up generic Nexium, which contains esomeprazole, is labeled gluten free. If find it interesting that a generic brand can figure this out, but the name brand can’t.

The product is not labeled gluten free, and the company says on its website that its products don’t contain gluten and gluten-containing grains, but it doesn’t test its final products for gluten, and, therefore, cannot confirm it’s gluten free.

Pepto-Bismol contains the active ingredient bismuth subsalicylate, which treats diarrhea, heartburn, and upset stomach. It’s not labeled gluten free, nor does it have any gluten-containing ingredients.

I contacted the company, and a spokesperson told me that while they are “certain” they don’t add gluten to Pepto-Bismol products, the plant and equipment have not “undergone allergy assessment.”

I independently tested Pepto Bismol for hidden gluten using my Nima Sensor, a portable gluten-detecting device. While Nima is not validated for testing medications, Pepto-Bismol seems less like testing an actual drug (pill) and more like testing a smoothie drink.

As you can see, Nima Sensor smiled, which means it didn’t find any gluten.

Fortunately, many generic gluten-free drugs are labeled “gluten free,” including the Up & Up generic Pepto-Bismol from Target, which contains the same active ingredient, bismuth subsalicylate. See the “Gluten Free” label in orange at the bottom of the label in the following picture.

Prevacid is not labeled gluten free. The company has not replied to my inquiry about whether or not Prevacid contains gluten.

The good news, however, is that Target’s Up & Up generic lansoprazole is labeled gluten-free. Shameful but not surprising that Prevacid is stumped by gluten.

Prilosec said in an email statement that while it doesn’t add gluten to Prilosec, the company cannot guarantee its products or manufacturing facility is free from gluten.

Tums is an antacid that relieves heartburn, sour stomach, acid indigestion, and upset stomach. The active ingredient in Tums is calcium carbonate.

According to the Tums website, all Tums products are gluten free and have been tested to ensure they meet the guidelines for “gluten-free” labeling.

Target’s Up & Up and Walmart’s Equate antacids are labeled gluten free (check labels to verify) and contain the same active ingredient, calcium carbonate.

How to Identify if a Drug is Gluten Free

When looking for relief from digestive woes, many over-the-counter medications can help you. But figuring out if they contain gluten can be a challenge. What do you do?

However, in a 2017 report titled, Gluten in Drug Products and Associated Labeling Recommendations Guidance for Industry, the FDA says that most medications don’t contain gluten (wheat, rye, or barley). If any do, the FDA says it’s only a trace amount that is “safe” for someone with celiac disease. The FDA adds that barley and rye are used “rarely or not at all” in the production of medications.

Check the Inactive Ingredients: Most of the time, the active ingredient in a drug is not the issue; instead, the inactive ingredients often contain starches with unknown origins. In my article, Is There Gluten in Medications? I discuss what ingredients to watch for and tips for identifying if a drug is gluten free.

Change Your Diet and Lifestyle: While it’s normal to have occasional diarrhea, constipation, or heartburn, chronic conditions could be the sign of something more serious.

Instead of masking these frequent symptoms with medications, dig deeper to identify the root cause. You may need to slow down, move your body more, and, most likely, change your diet to avoid becoming dependent on these medications.

Many say they cannot eat without taking a proton pump inhibitor, PPI, (Prilosec, Nexium, Prevacid, Zantac, etc.) Still, it’s essential to know that these drugs should not be used as long-term solutions. They only mask more profound issues.

PPIs, or histamine 2 blockers (H2), reduce the acid produced in your stomach. When you reduce your stomach’s ability to break down food properly, these large particles of undigested food pass through the stomach and into the small intestine.

Once these large food particles “leak” into the bloodstream, the immune system produces antibodies to attack what it perceives as foreign matter, leading to widespread inflammation in the body. Without a doubt, chronic inflammation leads to various disorders, including but not limited to autoimmune disease, cancer, heart disease, and other severe disorders that can reduce your quality of life.

Contact the Manufacturer: As you can see, I contacted many manufacturers to ask if their products were gluten free. Most could confirm that they don’t add gluten to the product but couldn’t verify their products were gluten free. Based on that information, you can decide if you’re comfortable taking medication. If gluten isn’t added to a product, most people will feel comfortable taking it, but again, everyone must decide their comfort level with such disclosures.

Become a Champion for Change: In my article, Is There Gluten in Medications? I discuss legislation that, if passed, will require pharmaceuticals to identify gluten and other allergens in medications. Learn more about the Gluten in Medications Act and write our local representative to champion this much-needed change.