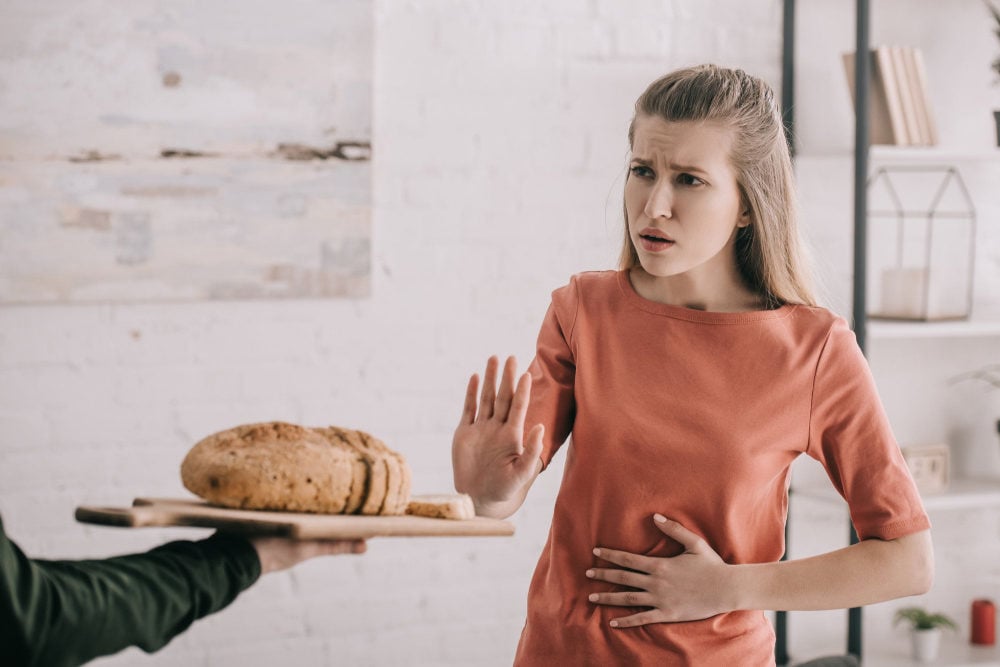 Gluten intolerance, also known as non-celiac gluten sensitivity, is an often misunderstood disorder and there’s a lot of confusing and contradictory information on the Internet. This article will shed light on this serious disorder and help you figure out if you have a gluten intolerance. Please note that the terms “gluten intolerance” and “gluten sensitivity” are used interchangeably because they mean the same thing. Please see my disclosures and consult your doctor before making changes to your diet. This post contains affiliate links.

It’s important to note that non-celiac gluten sensitivity may be a bit of a misnomer, as many people with gluten sensitivity actually have wheat sensitivity. This means they have an issue with various components of wheat, including but not limited to the gluten protein.

Celiac disease, an autoimmune disease where a person’s immune system mistakenly attacks the healthy tissue surrounding the small intestine every time a person eats gluten, affects only three million people or one percent of the population.

Unfortunately, despite the large size of people considered gluten intolerant these days, the research on gluten disorders continues to center around celiac disease, one of the most understood researched diseases today. Celiac disease is the only autoimmune disease in which the trigger (gluten) is known.

That said, one should not mistake lack of research for lack of disorder. Gluten sensitivity is a very real disorder that can lead to dire consequences if not treated properly.

One promising study that validates the role of gluten in people with autoimmune disease came in 2022 from one of the leading autoimmune doctors in the world, Dr. Yehuda Shoenfeld. Dr. Schoenfeld, and a team of researchers, found that the gluten-free diet can ameliorate the symptoms of non-celiac autoimmune diseases in nearly 80 percent of all cases!

The research is finally starting to explain what people with non-celiac gluten sensitivity have known all along… and that is that gluten is up to no good and causes very real issues in people who cannot tolerate the protein and/or wheat.

In this article, you’ll gain insight into gluten intolerance so you can better understand the disorder and how you can get tested.

Gluten intolerance comes with a slew of symptoms similar to those with celiac disease. While a lot of people experience classical symptoms, like gastrointestinal symptoms triggered by the consumption of gluten, a large number of people don’t experience any chronic GI issues at all.

It’s important to note that just because you don’t have GI symptoms such as bloating, gas, constipation, and/or diarrhea, it doesn’t mean you don’t have an issue with wheat. Some of the more common non-GI issues associated with a gluten intolerance include:

He says, “Excessive inflammation pulls on your chain, and wherever the weak link in your health chain is, that’s where the tissue damage will occur.” In other words, if your skin, for example, is where you’re genetically predispositioned for disease, a gluten sensitivity will rear its ugly head in the form of a skin condition.

How to Get Tested for Gluten Intolerance

Before getting tested for gluten intolerance, it’s important to first rule out celiac disease for a number of reasons I detail in my article, STOP! Don’t Go Gluten Free Until You Read This Article. You can get tested for celiac disease with this reliable and convenient at-home celiac disease test.

If you’ve ruled out celiac disease but believe you still have an issue with gluten or wheat, then it’s time to look to other diagnostic measures.

Unfortunately, diagnosing someone with a gluten intolerance is challenging because there isn’t a firm consensus on how to do it and many doctors are in the dark about current testing protocols.

However, there is one test, the Wheat Zoomer test, that Dr. O’Bryan recommends that may be the magic bullet test the gluten sensitivity community has been hoping for.

Wheat Zoomer is a simple blood test that can determine if your body is making antibodies to wheat peptides – including gluten and non-gluten components to determine if you have a gluten or wheat sensitivity. It also looks for antibodies that indicate the presence of intestinal permeability, wheat allergy, celiac disease, wheat germ agglutinin-related vitamin D deficiencies, gluten ataxia and other neurological symptoms, and dermatitis/eczema (skin-related disorders).

If testing for gluten sensitivity isn’t in your budget, or your doctor is uncooperative in ordering the test for you, then you can take matters into your own hands and do a simple elimination diet. You may not have diagnostic proof of a wheat-related disorder, but you don’t need a document to know you have an issue with wheat.

During this time, you’re looking to see if your symptoms resolve. Are you experiencing less bloating and gas? Have your skin condition, migraines, and/or joint pain issues resolved or lessened? Do you have more energy?

It’s wise to work with a Certified Gluten-Free Practitioner to help Implement and stick to the gluten-free diet, which isn’t an easy feat.

After 4-6 weeks, you can reintroduce gluten. For some people, reintroducing gluten will hit them like a ton of bricks and make them feel awful. Others may feel fine at first, but then 2-4 months later, their thyroid begins to act up or their skin rash comes back.

Truly, the best way to know if your symptoms resolve is by testing upfront with the Wheat Zoomer test, and then retesting again six months later to see if your antibody levels dropped. Again, a trained Gluten-Free Practitioner can help you with this.

If eliminating and reintroducing gluten doesn’t resolve anything, it’s important to consider that gluten may not the root cause of your chronic disorder(s) and perhaps there is something more at play. Consult your doctor about getting tested for other disorders, particularly candida, SIBO, Irritable Bowel Syndrome (IBS), and/or a fructan intolerance.

A lot of people with gluten intolerance don’t realize that the gluten-free diet is a lifelong treatment, and that there’s no such thing as a “low gluten” diet.

In fact, Dr. O’Bryan says that your immune system creates memory B cells to wheat. That means it remembers wheat and will react to wheat every time it’s present in your body, similar to a vaccine.

For example, if you’ve received the measles vaccination, your immune system remembers measles and is trained to respond and attack the disease if it enters your body. The same happens when your immune system spots wheat; the memory B cells remember wheat and it makes antibodies to attack it.

The only way to treat a gluten intolerance is with a lifelong, strict gluten-free diet. This means you must eliminate all sources of wheat, barley, rye, and some oats from your diet for the long haul without exception.

To get started on the gluten-free diet, please read my Beginners Guide to Gluten Free and order my book, Dear Gluten, It’s Not You, It’s Me.