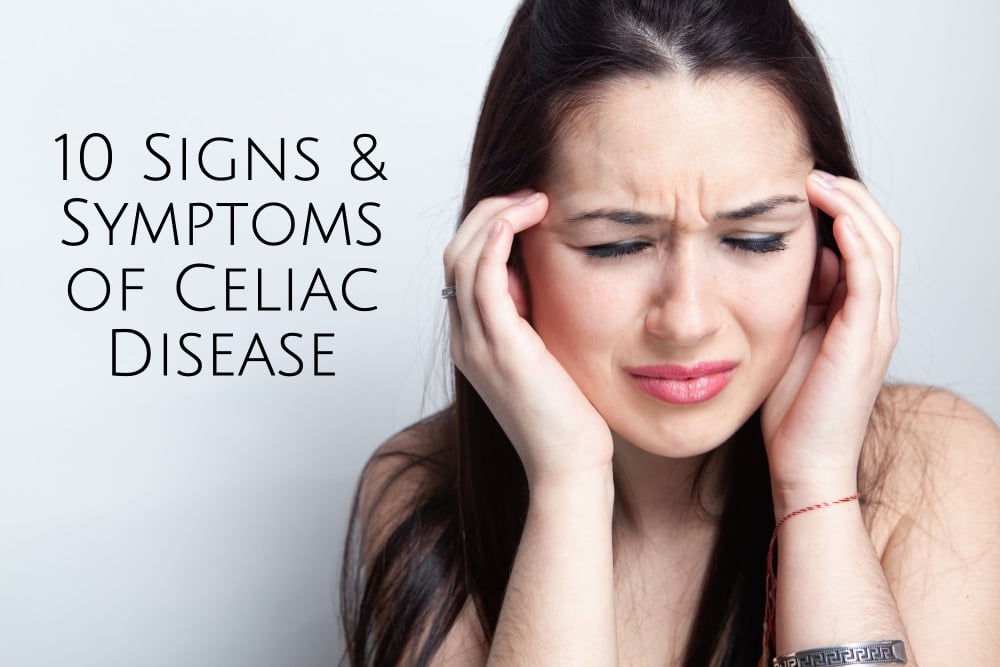 This post features 10 signs and symptoms of celiac disease (also known as coeliac disease) and contains affiliate links. Please consult your doctor if you suspect you have celiac disease and read my disclosures and disclaimers.

In this article, I discuss the 10 signs and symptoms of celiac disease to help you understand whether or not celiac disease might be at play in your body.

Celiac disease is an autoimmune disease where a patient’s own immune system becomes confused and begins to attack the healthy tissue surrounding the small intestine.

People with celiac disease are typically diagnosed via a simple blood test and/or biopsy of the small intestine where a doctor looks for flattened and damaged microvilli. The villi are the finger-like follicles surrounding the small intestine responsible for nutrient absorption and distribution.

Related Reading: How to Get Tested for Celiac Disease

When the small intestine is damaged and inflamed, celiac disease manifests itself in a slew of different ways throughout your body. In fact, celiac disease can rear its ugly head via one or more of 200 different documented symptoms.

Unfortunately celiac disease is an underdiagnosed disorder, and 78 percent of people with celiac disease don’t even know they have it because it’s so difficult to detect and diagnose.

Related Reading: What is Celiac Disease?

For example, if your joints hurt, you don’t automatically think to get tested for celiac disease, nor would you connect a simple canker sore in your mouth to celiac disease.

Perhaps, however, these are clues from your body telling you to dig deeper to investigate the root cause of how joint pain, or an innocent little canker sore, came to be. Maybe there’s more to those symptoms than meets the eye.

The following list includes the 10 most common signs and symptoms of celiac disease.

Because celiac disease is a disorder of the digestive system, many people experience a slew of digestive disorders signaling something isn’t right in their bodies.

Severe bloating, diarrhea, constipation, and excessive, uncomfortable gas are just a few of the digestive disorders that signal you might have celiac disease.

The good news is, however, that most of these uncomfortable and embarressing symptoms clear upon implementation of a gluten-free diet, which is the only treatment option available to people with celiac disease.

When you have celiac disease, your body’s ability to properly absorb and distribute nutrients to where they need to be in your body becomes impaired. This is why many patients of celiac disease feel a nagging sense of chronic fatigue.

You may be eating plenty of healthy foods, but if you have celiac disease, your small intestine cannot properly absorb or distribute those nutrients. This might leave you feeling nutrient deprived and therefore fatigued.

Additionally, many celiac disease patients become underweight, often due to the lack of nutrient absorption. On the other hand, a lot of people with celiac disease are overweight too; they might be overeating in order to fully feel nourished.

Related Reading: Why Do People with Celiac Disease Gain Weight?

The skin is the largest organ in your body and is often a window to what might be going on inside of you.

There are several skin conditions related to an abnormal immune system response to gluten including the following.

Dermatitis Herpetiformis (DH): DH is a chronic inflammatory disease of the skin that appears in the form of lesions that burn and itch (DH is sometimes called celiac rash). DH is often diagnosed (or misdiagnosed) as eczema

DH is an autoimmune disease where blisters appear on the elbows, knees, buttocks, back and/or scalp. The bumps are usually symmetrical, and skin blisters often appear on the same spot in both elbows, for example.

Keratosis Pilaris: This condition, also called chicken skin, is a chronic skin condition where raised, hard bumps appear on the skin. Research indicates those with keratosis pilaris may also have a fatty acid and vitamin A deficiency due to impaired absorption of nutrients.

Another common sign and symptom of celiac diseases shows up in various oral manifestations.

One study found that enamel defects are common in adults with celiac disease and that observation of these effects is another way to potentially diagnose celiac disease.

Another study found that a pattern of enamel defects and oral aphthae (small ulcers appearing in the mouth or tongue) are common findings in celiac disease, thus making the dentist an integral part of the celiac disease diagnostic team.

Geographic tongue, for example, is a benign inflammatory condition where an ulcer or sore patch appears on your tongue. One study showed an increased prevalence of geographic tongue in patients with celiac disease.

There are a variety of psychological manifestations of celiac disease such as anxiety, depression, aggressive behaviors, ADHD, and sleep disorders. A gluten-free diet has been shown to help combat many of the symptoms associated with these diagnoses, albeit a lot of information is still unknown.

A lot of patients suffering with ADHD are often nutrient deficient (particularly in fatty acids and Vitamin A) and once those deficiencies are addressed, the patients significantly improve according to Dr. Mark Hyman in his book, The UltraMind Solution.

Jennifer Esposito writes in her book, Jennifer’s Way, that she suffered from “mental disorders” that stemmed from undiagnosed celiac disease. Her doctor thought she was crazy, but she knew something was wrong with her. She was finally validated when she found out she had celiac disease, which was the root cause of her anxiety.

Celiac disease may also be more likely found in children with behavior issues. One study, which tracked 8,676 infants deemed at high risk for celiac disease, had mothers assess their child’s behavior at ages 3.5 years and 4.5 years. If a child was found to have celiac disease, the researchers would revisit the earlier behavior scores.

(6) Failure to Thrive and Short Stature

A child of short stature or who is failing to thrive is a strong sign that the child might have celiac disease. Studies confirm this correlation too. A child who isn’t growing properly or failing to meet milestones should be tested for celiac disease. This is absolutely one of the key signs and symptoms of celiac disease.

Related Reading: Is There a Higher Risk for Celiac Disease in Immediate Family?

An issue with gluten can also manifest itself in the form of bone problems. Osteoporosis, recurrent bone fractures in the limbs, joint pain, arthritis and swollen joints are often the sign of celiac disease.

If you have bone density issues ranging from osteopenia (mild) to osteoporosis (severe), you may have trouble absorbing nutrients and suffer from celiac disease.

Food intolerances are often the root cause of chronic inflammation, including migraines. Dr. Mark Hyman says wheat and gluten are among the biggest triggers of headaches and migraines. He also suggests other foods, like corn, dairy, eggs and yeast can trigger migraines and headaches.

Furthermore, researchers from Columbia University in New York found a greater incidence of headaches and severe headaches in celiac patients.

One study published in 2021 also found a higher prevalence of migraines in patients with celiac disease when compared with healthy controls.

While studies are inconsistent, incomplete or non-conclusive about whether or not gluten disorders are related to fertility issues, there is evidence suggesting that celiac disease is known to cause adverse reproductive consequences, including infertility and recurrent pregnancy loss. One study suggested that celiac disease is related to infertility in 4-8 percent of patients.

Reproductive problems such as infertility and irregular menstrual cycles are often connected to gluten intolerance as well.

Related Article: How Do I Know If I’m Gluten Intolerant?

Experts say that inflammation caused by gluten puts stress on the adrenal glands, which then malfunction and upset the balance of the endocrine system.

Another study in New York of patients with unexplained infertility found that 6 percent of the patients had confirmed cases of previously undiagnosed celiac disease.

Another study found the incidence of miscarriage and premature birth higher in those with celiac disease than the general population. Some experts say this may be due to complications related to nutritional deficiencies prevalent in those with undiagnosed celiac disease.

Related Reading: How I Put My Celiac Disease Into Remission

Elisabeth Hasselbeck talks about her struggle with infertility openly in her book, The G Free Diet. When she realized she had celiac disease, and once she began a gluten-free diet, she was finally able to conceive a baby.

Nearly 15 percent of the 2,000 women with celiac disease who took part in the Canadian Celiac Health Survey said they had difficulty conceiving, and nearly one-third of the participants had miscarriages.

I added an 11th symptom, as I had been getting a lot of questions related to eye health and celiac disease.

I’ve learned that celiac disease can manifest itself through various ophthalmic manifestations as well.

Symptoms affecting the eye are typically due to malabsorption issues (remember, unmanaged celiac disease impairs your ability to properly absorb nutrients) and includes disorders such as retinopathy, cataracts and dry eye.

Other eye manifestations are attributed to immune system dysfunction and can manifest in disorders such as orbital myositis and uveitis (inflammation in the eye).

This study discusses the link between celiac disease and these various eye conditions in greater detail.

If after reading this article, you suspect you have celiac disease, please consult your doctor about getting tested for celiac disease.

Remember, celiac disease – and other gluten disorders – can manifest itself in more than just via digestive woes. It can cause nervous system disorders, bone loss, joint pain, skin issues, and even infertility.

Related Reading: What You Need to Know about Celiac Disease Monitoring