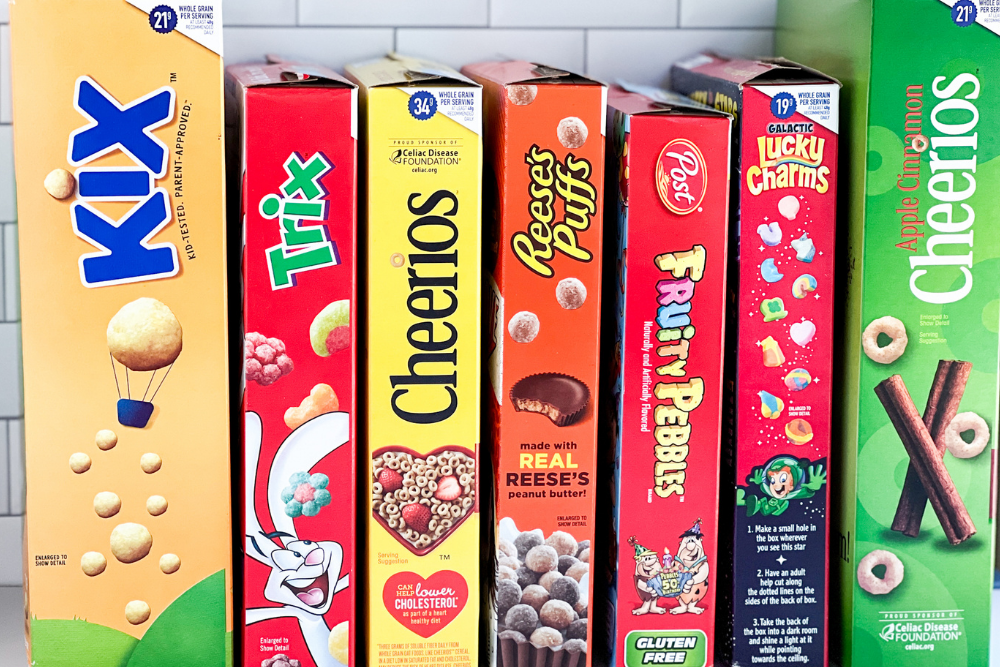 Looking for a list of gluten-free cereals? Curious what cereals are gluten free? If yes, not only have I researched each cereal brand, but also I tested each brand for hidden gluten. I’ll discuss whether Lucky Charms, Cheerios, Kix and Fruity Pebbles are truly gluten free or full of gluten. This post contains affiliate links. Please see my disclosures.

Have you ever wondered which of your favorite cereal brands are still safe to eat now that you’re on a gluten-free diet?

Is Raisin Bran gluten free? And what about Special K, Crispix and Cocoa Pebbles?

People with celiac disease and gluten sensitivities cannot eat gluten, a protein found in wheat, barley, rye and sometimes oats. Gluten destroys the lining of the small intestine in people with celiac disease, causing nutritional deficiencies and a slew of disorders. It also creates inflammation and leaky gut in the 18 million people suffering from non-celiac gluten sensitivity.

Did you know that gluten creates inflammation in all humans? It’s true and you can read more about it in this article, Does Gluten Cause Inflammation in Everyone?

While gluten is clearly found in many cereals you love like Frosted Mini Wheat (duh, wheat is in the title), it’s not so clear if it’s found in products that do not include wheat, barley or rye.

I decided to investigate all the questionable cereals to see if they are gluten free or full of gluten. My results are detailed below.

How I Determined if a Cereal is Gluten Free

To determine if a cereal is gluten free, I looked at the following criteria:

A Nima Sensor is a portable gluten-detecting device that allows you to test a small portion of your food for hidden gluten.

If the device displays a smiley face, it means the portion tested does not contain gluten. If you see a wheat symbol and “Gluten Found” message, it means it contains gluten. You can learn more about the Nima Sensor in my article, What You Need to Know About Nima Sensor Before You Buy.

Before investing in a Nima Sensor, please note that it may be worth waiting to see how The Allergy Amulet will fare once it’s launched in late 2022.

Also note that I only tested cereals that appeared to be gluten free and did not contain any gluten or disclaimers that hinted it may contain gluten.

For example, Cocoa Puffs does not appear to contain any gluten ingredients, however, the bottom of the ingredient list says, “May Contain Wheat Ingredients.” Therefore, I would not eat nor test this cereal.

You can click on any of the links below to automatically redirect to the cereal in question, or simply scroll down to see how each cereal performed:

I’m often asked if Cheerios are gluten free because there is a lot of confusion about the brand. A lot of people with celiac disease refuse to eat it.

On top of the gluten-free label and the endorsement from the Celiac Disease Foundation, I independently tested Cheerios for hidden gluten. The Nima Sensor did not detect any gluten (a smiley face means no gluten found).

Still, some people in the celiac disease community are wary of Cheerios. I have been skeptical myself, although I think that feeling is waning. To be honest with you, I believe everyone should be able to make their own decision about the safety of Cheerios without being judged or shamed.

The reason many people in the celiac disease community are skeptical of Cheerios is because General Mills uses commodity oats to make its cereal. Oats, while naturally gluten free, are often cross contaminated with gluten throughout the harvesting and manufacturing processes. You can read more about it in this article, Are Oats Gluten Free?“

General Mills, like other companies, optically or mechanically sorts its commodity oats to remove the oat grain from any potential gluten grains that might have contaminated the crop.

While using commodity oats is commonplace, many people in the celiac disease community say that General Mills does not properly test each batch of Cheerios to ensure each batch meets the FDA’s threshold of containing less than 20 ppm of gluten.

On top of that, after Cheerios announced to the world in 2015 that it was now a gluten-free cereal, it experienced a devastating “human error” that led to the contamination and recall of nearly 2 million boxes of Cheerios. These boxes where contaminated with wheat. The distrust in the company ensued, and many people with celiac disease swore off the brand.

Please note that not all Cheerios are labeled gluten free. If you decide Cheerios are right for you, you must look for the “gluten free” label on the packaging. The current flavors listed as gluten free include:

Please note that Cheerios found in Canada are not labeled gluten free whereas in the U.S., they are clearly marked.

One cereal brand that is proud to be gluten free is Chex. You can clearly see the “Gluten Free” label written in large print across most Chex cereal boxes.

You can enjoy all Chex cereals except for the Wheat Chex. Looked for boxes labeled “gluten free” to be extra certain you’re buying one of the gluten-free varieties.

I did not test Chex for hidden gluten because it is clearly labeled “gluten free.”

Crispix cereal is made of crunchy corn on one side and crispy rice on the other. It’s not labeled gluten free.

Learn more about why brown rice syrup may contain gluten in my article, Is Yeast Extract Gluten Free and 20+ Other Confusing Ingredients.

Kix cereal is basically a slightly sweetened crispy corn puff. While Kix is not labeled gluten free, nor could I find any gluten-free information about Kix on the Kix website, it doesn’t look like Kix contains any gluten-y ingredients.

Kix is made from whole grain corn, corn meal, sugar, salt, brown sugar syrup, and baking soda. As you can see, Nima is all smiles, which means the device did not find any hidden gluten.

Yes, Fruity Pebbles are gluten free and labeled as such too. The “Gluten Free” label is seen on the side panel of the cereal box and under the ingredient list.

Fruity Pebbles are made from rice, sugar, oil and a whole bunch of food dye. No gluten in sight, and Nima is all smiles, assuring me that it’s gluten free.

Please note that Cocoa Pebbles are also labeled gluten free and safe to consume on a gluten-free diet.

Yes, according to the Lucky Charms website, the Original Lucky Charms cereal is gluten free even though the cereal contains commodity oats. Again, while oats are naturally gluten free, they are highly cross contaminated with wheat during the harvesting and manufacturing processes.

Lucky Charms says, “First, we check the oats after sifting to make sure they contain less than 20 parts per million of gluten. Then, we check it again after the oats are milled into flour. We always ship the flour to our plants in our fleet of dedicated gluten-free trucks and rail cars. Lastly, after the flour is baked into Original Lucky Charms cereal, we check one last time to ensure [it’s] gluten-free.”

I put Lucky Charms to the Nima Sensor test, and Nima was all smiles, again, telling me it didn’t find any hidden gluten.

While not labeled gluten free, Trix cereal does not contain any gluten ingredients. In fact, it’s made from whole grain corn, sugar, rice flour, corn syrup, oil and food coloring.

I tested Trix with my Nima Sensor to see if it contained any hidden gluten. Nima came back with a smile (no gluten found).

Reese’s Puffs cereal is made of sweet and crunchy corn puffs coated with peanut butter. Obviously if you have a peanut allergy, you should avoid this cereal.

I tested Reese’s Puffs for hidden gluten with my Nima Sensor, and Nima came back with a smile (no gluten found).

Avoid these Cereals that Contain Gluten

Cereals that state they contain gluten, and should be avoided, include:

If you miss your favorite cereal from your pre-GF days, here are a few gluten-free cereals to try instead.

Be sure to always look for the “gluten-free” label on individual packaging. Not all cereals from these brands are gluten free.

Love Grown Foods: Love Grown cereals are made with beans and come in a variety of kid-friendly shapes and flavors. These are great for picky kids and discerning parents looking for a less sugary alternative to Fruity Pebbles. It’s also the perfect Fruit Loops alternative.

Magic Spoon: Magic Spoon is a kid-friendly cereal that says it’s high in protein and low in carbs. It’s grain free and made with a blend of milk protein, tapioca starch and peanut flour. It makes for a good Fruit Loops swap too.

One Degree Organics: One Degree makes sprouted rice cereals and sprout O-shaped cereals. It makes for a good Rice Krispies and Cheerios alternatives.

Three Wishes Cereal: Three Wishes makes a grain-free cereal with chickpeas as the main ingredient. It comes in Honey, Cinnamon, Cocoa, Unsweetened and Fruity varieties. If you’re worried about Cheerios, Three Wishes is a great alternative.

Am I missing any gluten-free cereals you love? Please leave a comment to share. I will update this article with new information as I have it.