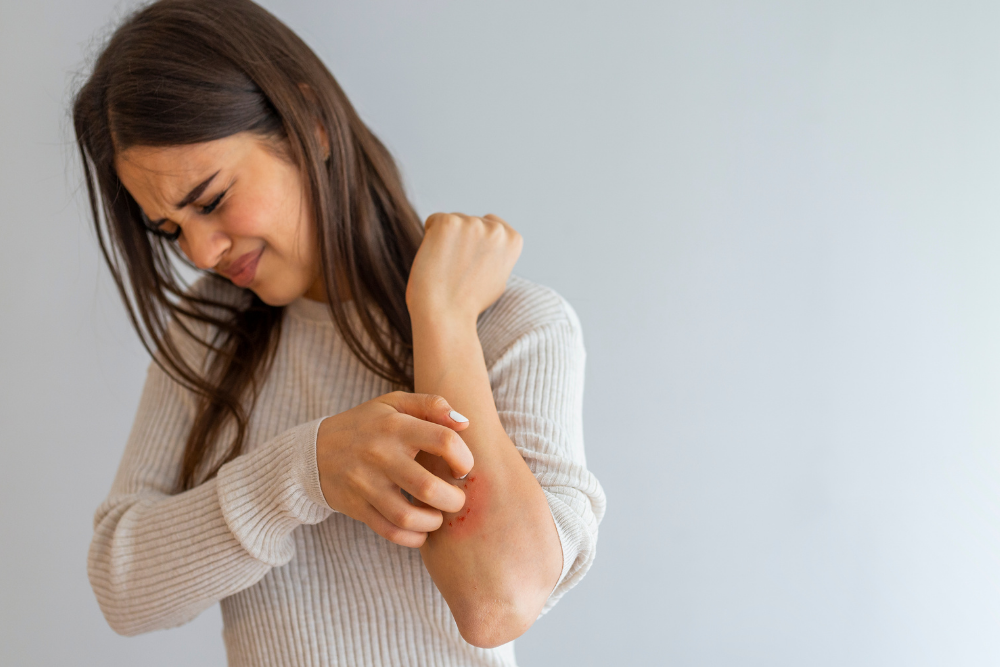 This article discusses the signs, symptoms and treatment options for celiac disease rash, which is also known as dermatitis herpetiformis. This is not a substitute for medical advice from your doctor. Please talk to your doctor if you suspect you have DH. Please read my disclosures.

The celiac disease rash, also known as a gluten intolerance rash or celiac of the skin, is a rare, chronic and sometimes painful autoimmune condition that causes itchy blisters on the skin.

One in 10,000 people have dermatitis herpetiformis while 1 in 30,000 have celiac disease. DH is most commonly diagnosed between the ages of 30-40, although it affects people of all ages. The only exception is that DH is not commonly found in children.

Most people with celiac rash will notice red, itchy bumps or lesions on their skin that seem to never go away or that flare up from time to time.

The rash typically appears on one’s elbows, knees, buttocks, lower back, and scalp, but also it can also be found on one’s neck, face, legs and other parts of their body.

One interesting thing about DH is that the rash is typically symmetrical. This means if the celiac disease rash shows on the left elbow, it’s likely to show on the right elbow too.

Patients with DH find that their rash will often disappear or turn on and off from time to time. Some also find that DH leaves behind a brown mark or shadow on the skin where it was present.

If you have any of the following symptoms, talk to your doctor about getting tested for DH:

Dermatitis herpetiformis is typically diagnosed by a primary care doctor or dermatologist. A doctor will biopsy a small piece of skin and will look for the presence of Immunoglobulin (IgA) antibodies within the dermis. (The dermis is the thickest layer of skin and is found between the epidermis and subcutaneous layers.) Traces of IgA antibodies are not normally found in skin tissue.

Some doctors also perform an intestinal biopsy of the small intestine, looking for damage consistent with celiac disease.

Some people who are diagnosed with DH do not have a positive celiac disease blood test, however, the diagnosis is just as serious as celiac disease and the treatment is the same for DH as it is for celiac disease.

A celiac disease rash is typically treated in two ways. One, it’s treated via a strict gluten-free diet, and two, it’s treated with the antibiotic dapsone.

Unfortunately, some research suggests it may take up to six months for a DH patient’s itchy skin symptoms to improve even with strict adherence to a gluten-free diet and antibiotic treatments.

The exact cause of the celiac disease skin rash is unknown, but researchers know that the blisters are triggered by the presence of gluten in the gut and that there is a strong link between DH and celiac disease.

People with the celiac skin rash experience damage to their intestines just as those with celiac disease do, however, only some DH patients experience classical celiac disease symptoms, such as bloating, gas, diarrhea, etc.

Most DH patients are highly motivated to manage their disorder, as the celiac disease rash is itchy and painful, not to mention disfiguring to the body during flare ups.

If the disorder isn’t properly managed through a gluten-free diet, complications may include an increased risk of intestinal and other cancers, autoimmune thyroid disease, and worsening skin symptoms.

If you suspect you have DH, or any skin disorder, talk with your doctor immediately.

Can Celiac Disease Cause Hair Loss?

10 Signs and Symptoms of Celiac Disease

Can Celiac Disease Go Away?

Can Celiac Disease Kill You?

Celiac Disease vs. Gluten Intolerance: What Do You Have?