Home » Gluten Free Information » Should You Get a Gluten-Detection Dog? 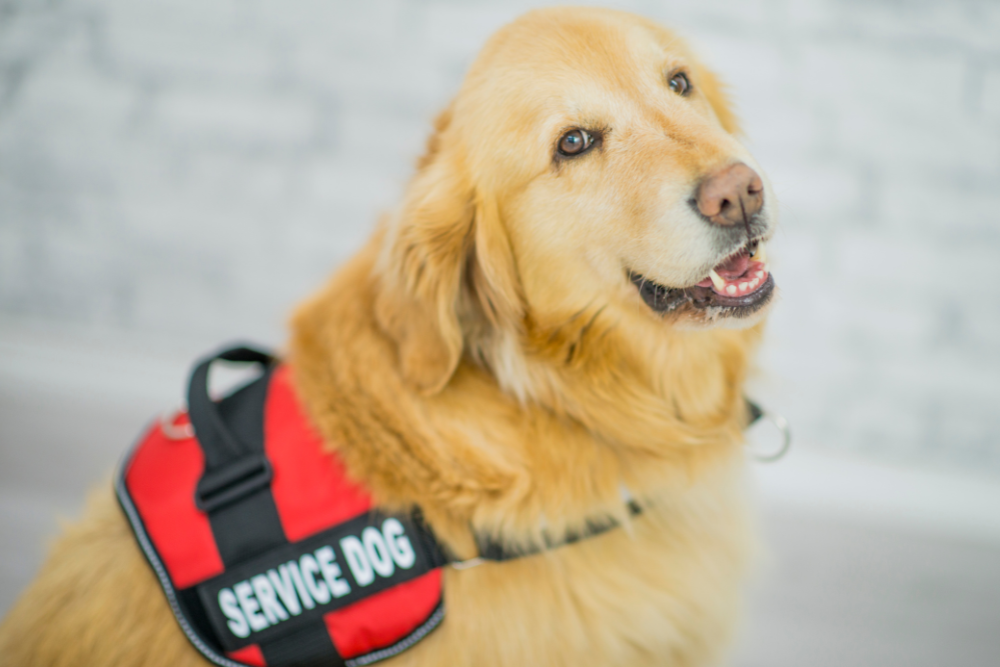 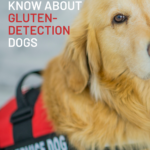 Like many people in the gluten-free community, I’ve long dreamed of owning a gluten-detection dog. But is it the right move for me and you? And what are the pros, cons, benefits, and costs involved in the process? In this article, I’ll get to the bottom of your most pressing questions related to buying, owning, and training a gluten-detection dog. This post contains affiliate links. Please see my disclosures.

Last week, Kendra and her gluten-detection dog, Suki, and Kari, and her gluten-detection dog-in-training Birdie, invited me to join them for lunch while they were vacationing in Denver. I jumped at the chance to meet two celiac friends in real life, and of course, I was curious to see Suki and Birdie in action. (Watch this video to watch Suki check my lunch for hidden gluten.)

Since posting the video, many people in the gluten-free community have peppered me with questions about gluten-detecting dogs, where they can buy one, whether they are accurate at detecting gluten and at what levels, and how much a gluten-detecting dog costs.

I asked Kari if she would chat with me to answer these questions about gluten-detection dogs based on her experiences training Birdie.

Ironically, Kari is a professional dog trainer and certified canine nutritionist specialist.  While Kari does not train dogs to become gluten-detection dogs per se, she has a unique perspective on what it takes to train a gluten-sniffing dog based on her experiences this past year with Birdie. She’s training Birdie to be her gluten-detection dog because she has celiac disease.

While owning a gluten-sniffing dog looks and sounds glamorous, Kari says there are thousands of hours involved in training and handling a service dog, and you rarely see the not-so-glamorous parts on social media. Therefore, before purchasing a gluten-detection dog, you must know exactly what you’re getting into and the time and costs involved.

What Does a Gluten-Detection Dog Do?

Gluten-detection dogs, also known as gluten-sniffing dogs, are service animals task-trained to identify the scent of gluten hidden inside anything, specifically foods that might be consumed, such as packaged foods, prepared meals, disposable plates and straws made from gluten, and personal care items like toothpaste, shampoo, and makeup.

A well-trained dog will alert its owner when it smells gluten, helping keep the owner safe from potential gluten contaminants. Each dog’s alerts are different and taught individually.

Where Can You Buy a Gluten-Detection Dog?

There are several ways to acquire a gluten-detection dog. One way is to purchase a trained dog from a company such as Nosey Dog Detection Partners.

Once the dog has completed its training, which takes about one year, the new handler will undergo rigorous training to learn how to work with the dog and continue reinforcement training.

Before acquiring a dog, Kari recommends that you consult a professional and established gluten-detection dog trainer to assess whether a particular dog is cut out for the job.

Kari told me she purchased Birdie from a reliable breeder, such as Family Loved Labs, who started “imprinting” Birdie as a sniffing service dog when she was just 14 days old.

Particular breeders, like the one Kari used, employ Early Neurological Stimulation, which creates a small amount of stimulus in the dog’s brain when they’re between 3-16 days old. The breeder will tickle the dog on its feet, hold it up, down, and upside down, and then set it on a cold cloth for five seconds. Research shows that such stimulation builds a service dog’s resilience to future stressors.

Kari also says her breeder employed Early Scent Introductions (ESI) technique. ESI exposes future scent-detection dogs to different scents, including gluten, so they build up their behavior of sniffing between 3-16 days old, plus imprint to the target odor (in this case, gluten).  At seven weeks old, Birdie and her littermates were temperament tested to determine the best candidate to be a service dog prospect, and Birdie scored the highest.

Once Birdie was ready to come home, Kari entered the CreScent Service Dog training program, where she spends 1-2 hours each week with a trainer and then 1-2 hours each day practicing and reinforcing what they learned. It takes most dogs 18-36 months to finish an owner-trained gluten-detection training program.

When choosing a dog for gluten-detection work, picking an animal with a good temperament and one that wants to work is essential. Kari’s gluten-detection dog, Birdie, is a Labrador retriever.

Kari says Golden retrievers and Labrador retrievers are interested in working and sniffing, so they can make great sniffing dogs.

She also recommends standard poodles, the breed of dog featured in the adorable children’s book I’m a Gluten-Sniffing Service Dog by Michal Babay. Beware, if your child reads this book, they will beg you for a gluten-sniffing dog!

Kendra’s gluten-detecting dog, Suki, is a Portuguese Water Dog she says she chose because it’s an intelligent, working dog and hypoallergenic (no shedding).

Regardless of what breed or dog you choose, Kari says it’s important to work with a trainer to evaluate the dog before beginning any gluten-detection training program. These trainers will help you figure out if the dog has what it takes to be a future gluten-detecting dog.

How Much Does a Gluten-Detecting Dog Cost?

The cost of purchasing an already-trained gluten-sniffing dog can vary, and Kari estimates the cost to be about $20,000.

Kari says she purchased Birdie for $3,000 from a reputable breeder. The breeder exposed Birdie to Early Neurological Stimulation (ENS) and Early Scent Introductions (ENI), helping Birdie at an early age for her calling as a future gluten-detection dog.

Once you purchase the dog, you will need to spend money working with a professional gluten-detection trainer. Kari says it will run the average person about $300-$400 per month for 1-2 years or until the dog is finished with its training. Kari has been training Birdie since she was eight weeks old, and all training sessions are over Zoom.

At some point, Kari says she will stop the training lessons, but it won’t be until both her instructor and she decide Birdie is ready. And even then, she will return for help as needed.

“To finish our program, Birdie has to graduate her odor [gluten] and various proficiency tests,” Kari says. She adds that Birdie will also need to pass a public access test, which requires “taking Birdie out in public and seeing how she responds to various environments such as elevators, busy parks, malls, restaurants, and other dogs.”

What Kind of Commitment is Required to Train a Gluten-Detection Dog?

Kari says it’s “extremely hard work” to train a gluten-detection service dog, and just because a dog “graduates” from a training program doesn’t mean the hard work stops. She will continuously need to train Birdie to practice her scent [gluten] and reinforce Birdie’s sniffing behaviors.

On top of it all, Kari says there are times when she doesn’t feel well, or she’s tired and doesn’t want to spend 1-2 hours training and practicing with Birdie. She’s dealing with two autoimmune diseases and sometimes says she has to push herself to work with Birdie even though she’d rather be resting.

“It’s a lot of work,” she says. “Dogs take a lot of effort to train, both physically and emotionally, and someone should consider this commitment before getting a gluten-detection dog.”

Once Birdie finishes, Kari also admits that in some instances, she may even take her Nima Sensor, a portable gluten-detecting device, to a restaurant instead of bringing Birdie. “You’ll get similar levels of protection with Nima as you do with a gluten-detection dog.”

How Accurate is a Gluten-Detecting Dog?

Kari says Birdie can detect trace amounts of gluten as little as one part per million (ppm). She can also detect a tiny bit of residue gluten on a piece of parchment paper, she says, and once finished, she will be able to identify cross-contamination in a restaurant dish or packaged food.

The FDA says products can be labeled “gluten free” even if they contain trace amounts of gluten below 20 ppm. This means Birdie and other gluten-detecting dogs may detect gluten in products the FDA would deem safe.

This reminds me of the constant criticism lobbed at Nima Sensor by people in the gluten-free community who say Nima is “too accurate” and, therefore, unreliable. They say this because Nima can sometimes detect gluten below 20 ppm, at 10 or 18 ppm. These critics would probably tell you not to trust a gluten-detection dog because it’s too accurate, like Nima.

Kari also wants the gluten-free community to know that a gluten-detection dog isn’t a substitute for not asking questions when ordering at a restaurant. “You still must disclose that you need a gluten-free meal and do your due diligence before eating anything,” she adds.

What are the Challenges of Owning a Gluten-Detection Dog?

“While it seems fun getting to bring your service dog with you everywhere, it can be mentally and physically draining,” says Kari.

“When we go to a restaurant to practice, it’s a lot of work for us both. I have to make sure her needs are met while I’m trying to enjoy a meal. Even though she is training to be a medical device, Birdie is still a dog, and I don’t want the environment to be stressful. I want her to feel safe and happy wherever she is. It’s not a relaxing experience. At least not yet.”

And, of course, at the end of the day, these are dogs that need to be fed, walked, exercised, and taken out to go potty.

“What you see on social media is thousands of hours of training and only a snippet of the work going on behind the scenes,” she says.

Insurance companies do not typically cover the cost of a service dog, but service animals may be considered qualified medical expenses and therefore receive tax-advantaged status.

For example, you might be able to use a Health Savings Account (HSA), which offers tax advantages, to cover the dog’s expenses, including food and veterinary care. Check with your health insurance provider for details and qualifications.

Also be sure to listen to Kendra’s interview on The Celiac Project Podcast for more information about what it’s like to own a gluten-detection dog.