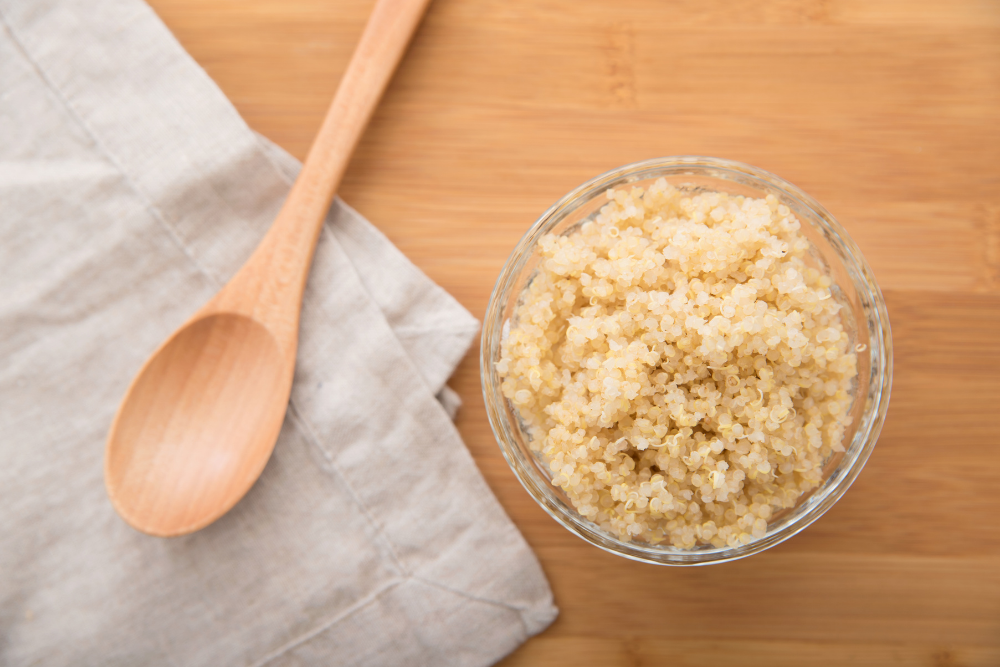 I’ve always thought quinoa was gluten free, but then I learned about a study that cast doubt on what I thought I knew. In this article, I’ll discuss whether or not quinoa contains gluten and if it’s safe for people with celiac disease and gluten sensitivities to consume. I also tested several brands of quinoa for hidden gluten with my Nima Sensor and share the results below. This post may contain affiliate links. Please see my disclosures.

Most people in the gluten-free community know that gluten is a protein found in wheat, rye, barley and sometimes oats. It’s the “glue” that holds baked goods together and gives bread its stretchy texture.

While gluten-containing grains are off the table for those with celiac disease and gluten sensitivities, there are several grains – and pseudo-grains – that the gluten-free community can still enjoy.

Regardless, people on the gluten-free diet have enjoyed quinoa as an alternative to wheat, barley, and rye, and as a “healthier” alternative to rice, for decades.

In fact, quinoa is a “healthier” grain and a complete protein, which means it contains all nine amino acids humans need. Amino acids are known as the building blocks for life as they build cells and muscles, repair tissues, boost the immune system, fuel the body, and help with other important biological processes. Quinoa is also a fantastic source of fiber, calcium, folate, magnesium, zinc, and iron.

In this article, I’ll talk about:

Is Quinoa Gluten Free? A Study

Recently I learned about a study that put my whole understanding of quinoa and gluten into doubt.

Researchers in a 2012 study published in the American Journal of Clinical Nutrition set out to determine the amount of celiac-toxic proteins (prolamine) molecules found in 15 different varieties of quinoa. They also assessed the ability of these molecules (epitopes) to activate an immune response in people with celiac disease.

The researchers found that four out of the 15 varieties of quinoa “had quantifiable concentrations of celiac-toxic epitopes” and two of the varieties triggered an immune response in people with celiac disease. In other words, these researchers found that quinoa contains proteins similar to gluten that could activate the immune system in people with celiac disease.

Is Quinoa Cross Contaminated with Wheat?

While quinoa is a gluten-free grain, it is also susceptible to coming in contact with gluten as it is grown and harvested in close contact with wheat, rye, and barley.

A 2010 study published in the Journal of American Dietetic Association found that while many single-ingredient foods, such as millet, sorghum, and buckwheat, are considered inherently free of gluten, many of them contain gluten, and some contain gluten at higher levels than 20 parts per million (ppm). The FDA says products labeled gluten free must contain less than 20 ppm of gluten.

The researchers purchased 22 gluten-free grains, seeds, and flours that were not labeled gluten free and sent them to a lab for analysis. (Please note quinoa was not tested as part of this experiment.)

In other words, many single-ingredient grains that the general public considers “inherently” gluten free may actually contain gluten after all.

I tested two brands of quinoa for hidden gluten using my Nima Sensor. As mentioned, Nima Sensor is a portable gluten-detecting device. You add a small amount of gluten in the single-use test capsule and then in about 2-3 minutes, Nima will reveal if the product contains gluten.

Please note that sometimes the Nima Sensor is ultra-accurate and can detect gluten below the 20 ppm threshold. Please read, What You Need to Know About Nima Sensor Before You Buy, if you’re thinking of investing in a Nima Sensor.

I first tested Village Harvest quinoa. This quinoa brand is not labeled gluten free and displays an allergen warning statement saying that it’s packaged in a facility with products that may contain wheat.

As you can see below, Nima is all smiles, which means no gluten was found. (Nima displays a wheat symbol if it finds any gluten.)

I also tested the white quinoa from Walmart’s Great Value brand. It’s labeled “gluten free” in small print on the back of the packaging. Nima again smiled, which means it did not find any gluten.

Both of these tests put my mind at ease, that yes, quinoa is generally a safe “grain” to consume on a strict gluten-free diet. Of course, there may be exceptions, and below I share how you can protect yourself from accidentally eating gluten even in inherently gluten-free, single-ingredient products such as quinoa.

How to Protect Yourself

While quinoa is nutrient-dense food generally safe to consume when following a strict gluten-free diet, consider taking a few precautions when consuming it if you have celiac disease or gluten sensitivity.

Look for the Gluten-Free Label: When buying quinoa, purchase brands that are labeled gluten free or even better, certified gluten free. A certified gluten-free label means the product has been verified to contain less than 20 ppm of gluten from a third-party certifying agency like the GFCO.

Avoid Vague Labels: Avoid vague labels that say “naturally gluten free,” “made with gluten-free ingredients” or “no gluten ingredients used.” These labeling claims don’t automatically mean the brand tested the product to ensure it contains less than 20 ppm of gluten per the FDA’s gluten-free labeling guidelines.

Overall, quinoa is generally considered gluten and those following a medically-necessary gluten-free diet can feel confident eating it when taking the proper precautions.

Enjoy these articles and recipes: