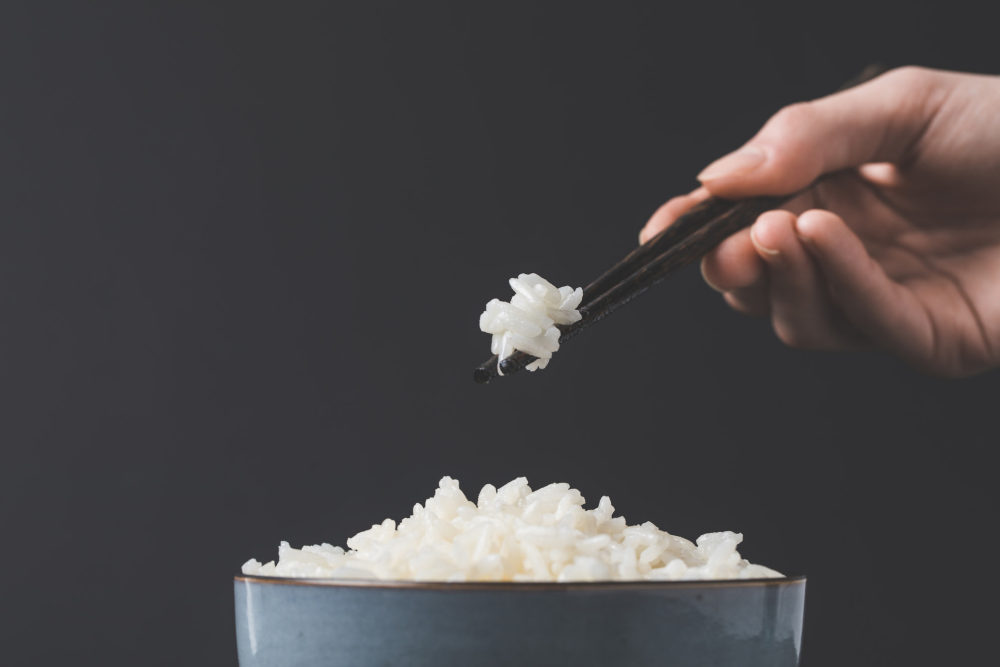 Many people wonder if rice is gluten free and if it can be safely enjoyed by those following a gluten-free diet. I’ll answer all your burning questions about rice and gluten. This post contains affiliate links. Please see my disclosures here.

Years ago I went to a catered networking luncheon. I contacted the organizers ahead of time to request a gluten-free meal (if possible). They said it would be no problem.

When I arrived, they said I could enjoy the fish and vegetables, but they told me to avoid the rice. Stumped by this warning to avoid the rice, I inquired further. I knew rice to be naturally gluten free. Perhaps they put something gluten-y in there?

As it turns out, they didn’t put anything in the rice. They told me to avoid it because they thought rice contained gluten.

I explained to them that rice does not contain gluten, and that rice is gluten free. In fact, rice is a staple ingredient in most gluten-free flours, baked goods, and more.

Given the confusion those in the professional catering industry hold when it comes to rice, I thought I would write this article to set the record straight about rice, mochi, mirin, Minute Rice, glutinous rice and everything in between.

Yes, rice is naturally gluten free. This goes for all types of rice:

Yes, glutinous rice, or sticky rice, is gluten free. Glutinous, which sounds like the word gluten, simply refers to the stickiness of the rice, not the protein known as gluten. Confusing, I know!

While gluten is off-limits to those with celiac disease or gluten sensitivities, glutinous rice is a-okay to eat and is 100 percent gluten free.

Yes, rice paper (also called nem wrappers) is made from rice starch and is edible. The only ingredient in rice paper is rice, although check labels because some rice paper may include tapioca starch or other ingredients. (Tapioca starch is gluten free, too.)

To reconstitute rice paper, you simply dip it in warm water, then use it to wrap spring rolls or my deconstructed egg rolls.

Mochi is a soft and gummy-like Japanese rice cake made from mochigome, a short-grain japonica glutinous rice (sweet rice flour or mochi flour). Other ingredients, such as water, sugar, and cornstarch, are used to make mochi too.

When making mochi, the rice is flattened into a doughy paste, formed into the desired shape, and usually stuffed with a sweet red bean paste or ice cream. Mochi is a very popular treat in Japan.

While mochi itself is gluten free, check labels as some manufacturers add wheat or other ingredients to store-bought mochi treats.

Mirin is a Japanese rice wine used to infuse savory umami flavor into Asian cuisine. It’s commonly used as a marinade or dipping sauce and is found in popular Asian dishes.

Mirin is made from fermented sweet rice and is naturally gluten free. Always check labels to ensure no other questionable ingredients have been added to the mix.

No, Rice-A-Roni is not gluten free because it contains rice and pasta (orzo, vermicelli), which is made from wheat flour. Below is the company’s official statement:

We understand that individuals sensitive to gluten may have difficulty digesting even trace amounts of gluten. Since so many of our Rice-A-Roni and Pasta Roni products contain grain ingredients that have gluten, we cannot guarantee that any particular product is entirely free of gluten.

Pasta Roni is not gluten free as it is made from wheat flour.

The good news is that while Rice-A-Roni is off-limits, there are several brands that are free from gluten including:

Many of Zatarain’s boxed rice mixes are labeled gluten free, including its yellow rice mix. Read individual labels to identify ones that are free from gluten.

Several Minute Rice boxed rices are gluten free, according to the manufacturer, including its brown rice, jasmine rice, rice and quinoa mix, and many of its ready-to-serve rices including the ready-to-serve yellow rice.

(And yes, before you ask, quinoa is naturally gluten free like rice. Read 27 Tried and True Quinoa Recipes.)

Many of Uncle Ben’s rice mixes are naturally gluten free. Always check ingredient labels to make sure the exact mix you’re purchasing is free from gluten.

No, Rice Krispies are not gluten free. Although they are made from puffed rice, Kellogg’s coats them with barley malt. There are crispy rice cereal options that do not contain gluten. You can learn about them in my article, Are Rice Krispies Gluten Free?

Yes, risotto rice is gluten free. Risotto is typically made with arborio rice, a short-grain starchy rice. Of course, risotto is a dish that contains many ingredients that may or may not be gluten free. Inquire within.

When ordering chow fun at a Chinese restaurant, beware of how it’s prepared and seasoned. Most restaurants typically seasoned chow fun noodles with soy sauce, which is not gluten free.

Always buy rice that is found in sealed packaging and where the only ingredient is rice (or unless the words “gluten-free” are noted somewhere on the packaging).

Bulk bins are notorious for coming in cross-contact with the items in the other bulk bins, may which contain gluten. People often mix up bulk bin scoops or some of the bulk bins spill into the other bins. This becomes tricky when the rice bulk bin is directly below or next do the shredded wheat bulk bin, for example.

When eating rice at restaurants, ask how it’s cooked to make sure it is free from gluten-containing broths, soy sauce or other ingredients that would render it no longer gluten-free.

Be sure ask lots of questions, express the seriousness of your diet, and study up on my tips for eating out safely.

Rice is often served at Chinese restaurants and often is mixed with soy sauce in fried rice. Therefore, most restaurant fried rice dishes are not gluten-free. (Try my homemade gluten-free egg fried rice recipe though.)

Sushi rice, however, is made with glutinous sticky rice, rice wine vinegar, and sugar, which is safe for you to eat (of course, make sure no other ingredients are added to the rice, and that the sushi toppings are free from soy sauce). Imitation crab is also a no-no at most Japanese restaurants.

Mexican restaurants often serve seasoned Mexican rice or Spanish rice that is typically free from gluten. However, inquire within to make sure no gluten-y seasonings or add-ins were used.

Related Article: How to Avoid Gluten at a Mexican Restaurant

Is there Arsenic in Rice?

Arsenic is an element in the Earth’s crust and is present in our water, air, and soil. The FDA says that rice contains higher levels of inorganic arsenic because the grain tends to absorb arsenic more readily than other crops. On top of rice being a natural element found in the earth, arsenic is also sprayed on our crops, which leaches into the ground soil and also is absorbed by the rice.

Consumer Reports tested different rice varieties to find out which rice has the lowest and highest arsenic contents.

Researchers found that white rice generally contains less arsenic than brown rice (as the arsenic is found in the outer husk, which is removed in white rice). In fact, brown rice has 80 percent more inorganic arsenic on average than white rice of the same type. Brown rice has more nutrients, though, so ditching brown rice isn’t the best choice either.

They also found that white basmati rice from California, India, and Pakistan, and sushi rice from the U.S. have about half of the inorganic-arsenic amount of most other types of rice.

Conversely, the researchers found that white rice from Texas, Arkansas, and Louisiana contain the highest levels of inorganic arsenic.

To ensure lower exposure to arsenic, experts suggest that you rinse your rice thoroughly before cooking (several rinsings). They also recommend cooking your rice in excess water and then draining it to also drain off excess arsenic.

Also, instead of eating rice, researchers suggested that gluten-free eaters enjoy alternative grains, such as quinoa (technically a seed), millet, and buckwheat, all gluten-free grains that contain less arsenic than rice.

While rice is nice to eat when you’re on a gluten-free diet, enjoy it in moderation. Fill your plate with plenty of fresh fruits and vegetables, lean meats, potatoes, beans, and other grains, like buckwheat, millet, and quinoa instead.

Related Article: The Celiac Disease Diet: What A Celiac Can and Can’t Eat

The good news is that it’s perfectly safe to enjoy rice when you’re following a gluten-free diet. Just enjoy the delicious grains in moderation … and always read labels to uncover hidden gluten.