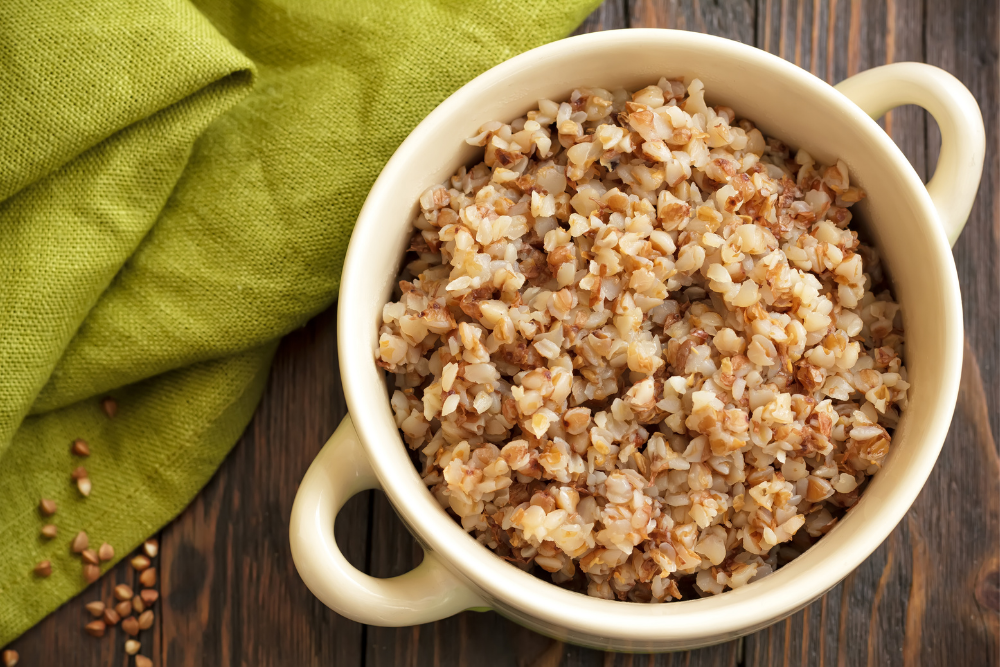 The gluten-free community is often left scratching their heads when it comes to a little-known ingredient called buckwheat. What is buckwheat and is it gluten free? And are soba noodles, which are made from buckwheat flour, gluten free? Let’s discuss below. This post may contain affiliate links. Please see my disclosures.

Gluten, a protein found in wheat, barley, rye and sometimes oats, is off limits to people with celiac disease and gluten sensitivities.

While most gluten-free people know to avoid wheat, they often wonder if that includes buckwheat. Buckwheat contains the word “wheat”, suggesting it may contain wheat as well.

However, despite buckwheat containing the word “wheat,” it’s gluten free and perfectly safe to consume on a gluten-free diet.

In this article, I’ll help you get to know buckwheat a bit better. I’ll also help you decode if foods made from buckwheat, like soba noodles and kasha, are gluten free as well.

Despite its name, buckwheat isn’t a grain, nor is it affiliated with wheat grass in any way. Instead, buckwheat comes from a flowering plant that is a relative to rhubarb and sorrel.

Because buckwheat is consumed as a cereal grain, it’s often referred to as a pseudocereal. Other pseudocereals include quinoa and amaranth.

Buckwheat offers a great source of protein, insoluble fiber, and trace minerals such as copper, zinc, and manganese, making it an attractive ingredient for those on a gluten-free, health-forward diet.

Yes, buckwheat is gluten free and safe for people to consume on a gluten-free diet. Buckwheat has nothing to do with the wheat grass family as its name suggests.

Researchers fed people with celiac disease buckwheat and the patients showed no immunological reaction to the pseudo grain.

Buckwheat is also safe for someone with a wheat allergy to consume, as it is not related to wheat in anyway.

How to Prepare Buckwheat

Buckwheat can be used in lieu of wheat grains, like bulgur, wheat berries, spelt, and freekeh (farik), and it utilizes the same cooking method as those grains as well.

To cook the pseudocereal, add one cup of buckwheat to two cups of boiling water. Cover and simmer until the buckwheat soaks up all the water and is tender. Season as you would a bowl of rice (savory) or oatmeal (sweet).

Toasted buckwheat, known as kasha, is often enjoyed as a breakfast porridge similar to cream of rice or oatmeal. Kasha is known to have a strong, nutty flavor and firm texture, although it can soften and become more gummy depending on how it’s cooked.

Buckwheat flour is used in baking breads, pancakes, and muffins, and it’s also the key ingredient in soba noodles, which are popular noodles in Japanese cuisine and used in ramen soups. (You can use buckwheat flour in my Gluten-Free Artisan Bread recipe.)

A popular way to enjoy buckwheat is as an ingredient in soba noodles, which are a delicious Japanese noodle primarily made from buckwheat flour and often served in soups.

Soba noodles are gluten free, although sometimes companies add other ingredients that may or may not contain gluten.

For example, the soba noodles I found at my local grocery store contained both buckwheat and wheat flour! Buyer beware.

That said, the soba noodles I found on Amazon are gluten free and made from only one ingredient: Buckwheat flour.

Look for buckwheat noodles at most grocery stores nationwide (although read ingredient labels carefully), at an Asian market near you (like an H-Mart), and on Amazon.

Now that you know buckwheat is gluten free, and most soba noodles are gluten free too, it’s time to learn about what other products are free from the damaging protein. Read these articles to learn more: