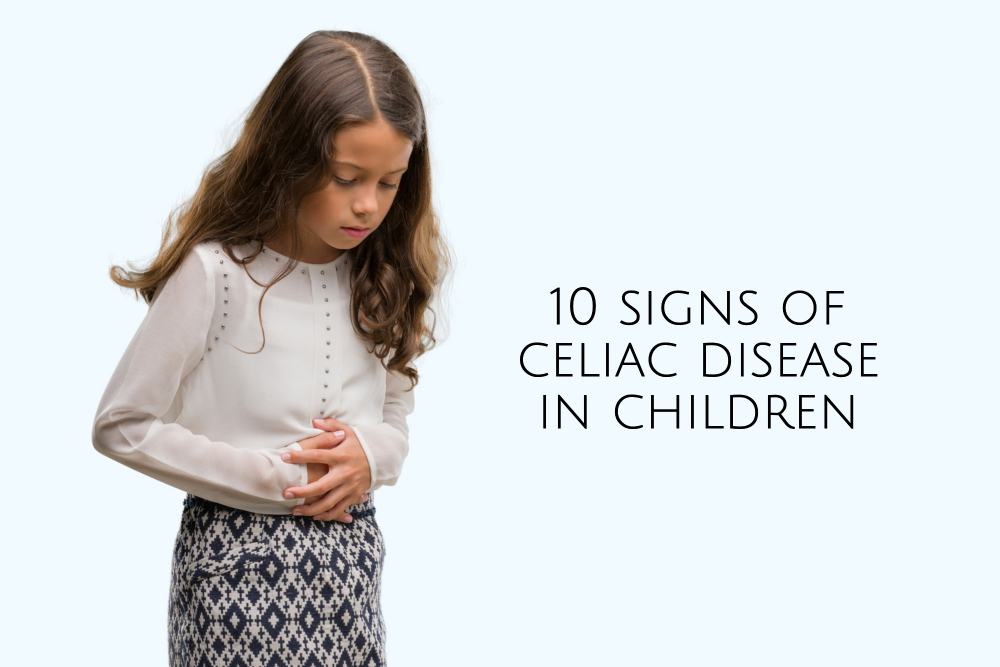 This post, 10 signs of celiac disease in kids, may contain affiliate links. Please contact your child’s doctor to discuss your child’s symptoms and the potential for celiac disease testing. I am not a medical doctor. Please see my disclosures and disclaimers.

When my child is struggling or suffering in any way, I am eager to understand what is going on, and find a way to make it all better.

I imagine you feel the same way, too.

If you notice any changes in your child’s behavior, growth, moods, grades, diet, and/or more, perhaps it’s time to probe whether something more than adolescence might be at play.

Don’t know what celiac disease is? Read my article, What is Celiac Disease?, to get up to speed.

10 Signs of Celiac Disease in Kids

According to WebMD, there are a variety of signs of celiac disease in kids. In this article, I will explore the 10 most common symptoms, as well as what you, as a parent, can do if you suspect celiac disease in your child.

(1) Growth Problems or Failure to Thrive

Celiac disease is most commonly known as a disease of the gut. When someone has celiac disease, their gut is unable to properly absorb nutrients from the food they eat.

Every time someone with celiac disease eats gluten, their immune system gets confused and launches an attack on the healthy tissue surrounding the small intestine.

This autoimmune attacks impairs the small intestine’s ability to function properly, deterring it from properly absorbing and distributing nutrients from the food you eat to the rest of your body (where it’s need to help your organ’s function properly).

Without a healthy small intestine, a child isn’t getting the proper nutrition he or she needs to grow and thrive during his or her formative years.

Therefore, if your child is falling off the growth chart, short in stature, or experiencing delayed puberty, it’s crucial that you talk to your doctor about testing him or her for celiac disease right away!

Related Reading: How to Get Tested for Celiac Disease

If your child’s body isn’t properly absorbing and distributing nutrients from the food she is eating, or your child is experiencing chronic diarrhea, she might have celiac disease.

Children with undiagnosed celiac disease are often (but not always) underweight and look malnourished.

However, experts warn that it’s not uncommon for overweight or obese children to have celiac disease, and that overweight children with other underlying symptoms associated with celiac disease can still test positive for the autoimmune disease.

The Mayo Clinic says that children with celiac disease are more likely than adults to have one or more of the following digestive problems:

Anemia is a common symptom of celiac disease in kids, usually due to malabsorption of micronutrients including iron, folic acid, and vitamin B12. The prevalence of anemia affects anywhere from 12-69 percent of newly diagnosed celiac disease patients according to a variety of studies.

Iron-deficiency anemia (IDA) is very common symptom in undiagnosed celiac disease, afflicting up to 46 percent of patients according to research, albeit a higher number of adults are affected by IDA than children.

Any nutritional deficiency can lead to feeling of fatigue, making it seem like your child is withdrawing from school or his friends even though he’s might just be physically exhausted as a result of impaired nutrient absorption.

Chronic lack of nutrients can result in a child feeling moody and/or irritable, as well as lead to feelings of depression.

A Swedish study confirmed this, too. Researchers found that children with celiac disease are at higher risk for psychiatric disorders such as mood disorders, anxiety, eating disorders, behavioral issues, ADHD, autism spectrum disorders, and intellectual disabilities.

The most common skin disorder associated with celiac disease is called Dermatitis Herpetiformis (DH), often referred to as “celiac rash.”

According to WebMD, a child with DH will have red, itchy bumps on his skin, and sometimes even painful blisters that look like herpes (although DH does not come from the herpes virus).

According to Beyond Celiac, DH is rare in children; however, if your child experiences red, blistery, itchy skin, it’s wise to talk to your doctor about testing him for celiac disease.

Children with celiac disease might experience cream, yellow or brown discoloration in the enamel covering of their adult teeth. They might also experience canker sores, mouth sores, and/or geographic tongue.

A Canadian survey found that 16 percent of children and 26 percent of adults with confirmed celiac disease experienced recurrent oral ulcers.

Children with an immediate family with celiac disease have a higher likelihood of getting the autoimmune condition.

A study published in the Journal of Pediatric Gastroenterology found a 4.8 percent prevalence of celiac disease in first-degree relatives of patients already diagnosed with the disorder.

Related Reading: Is There a Higher Risk for Celiac Disease in Immediate Family?

You can learn how to get a genetic test for celiac disease in this article.

Children with thin bones and/or frequent fractures are also at high risk of being diagnosed with celiac disease.

While osteoporosis is often thought of as an older person’s disease, it can strike at any age, even in children.

In fact, the prevalence of osteoporosis and osteopenia in patients newly diagnosed with celiac disease may be as high as 75 percent according to Beyond Celiac, likely due to impaired absorption of calcium and magnesium.

Experts recommend children with any of the following disorders also get tested for celiac disease:

Sometimes the Signs are Hidden

It’s important to note that many people mistakenly think of celiac disease solely as a digestive disorder. However, as you can see from this list, celiac disease can manifest itself in a variety of ways and can affect your brain, gut, joints, and more.

Unfortunately, because there are so many signs of celiac disease in children, getting a proper diagnosis can take years, if ever, leaving a slew of damaging symptoms and heartaches along the way.

There are at-home celiac disease tests you can use to test you or your child for celiac disease if you prefer the convenience of testing at home. As always, please discuss any results with your child’s doctor.