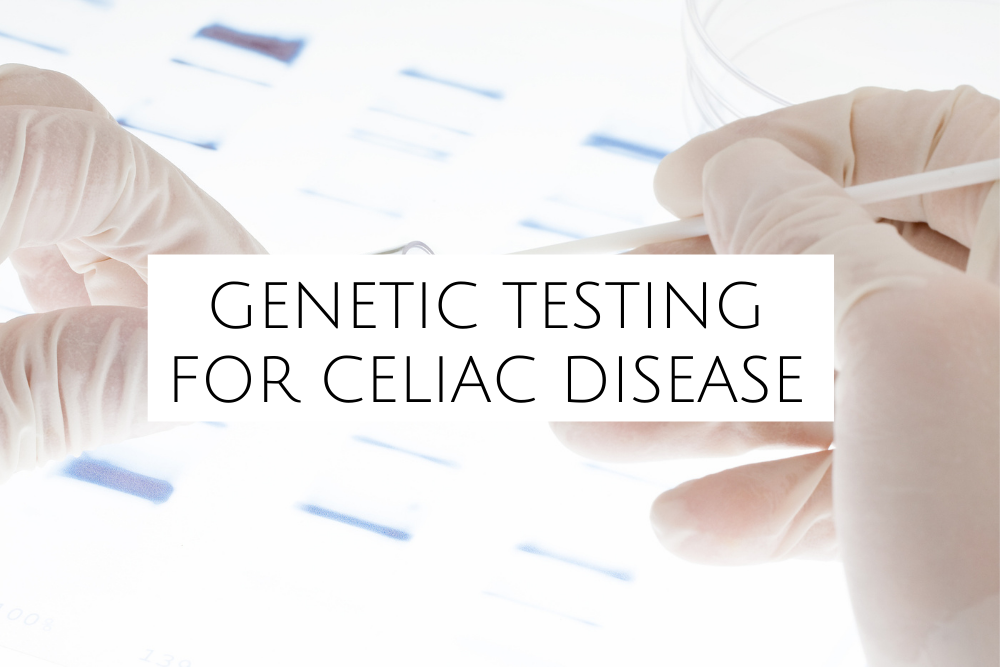 Celiac disease is an inherited genetic disorder that causes the immune system to mistakenly attack the healthy tissue surrounding the small intestine every time a person eats gluten. One in 100 people – or one percent of the world population – has celiac disease.

There are two known celiac genes, HLA-DQ2 and HLA-DQ8, and a person can inherit one or both of the genes from their parents. Twenty to 30 percent of the US population carry the HLA genes associated with celiac disease, with 95 percent of HLA-positive individuals carrying DQ2 and only five percent carrying DQ8.

It’s important to note that just because someone carries one of the celiac genes doesn’t mean that person will get celiac disease. Genes are only one of three factors that can lead to someone eventually getting celiac.

In addition to genes, eating gluten, a protein found in wheat, rye, barley, and sometimes oats, can trigger the onset of celiac disease, as can intestinal permeability or trauma, which researchers now understand can “turn on” or activate once dormant genes. Did you know that celiac disease is the only autoimmune disease in which the trigger (gluten) is known?

Because celiac disease is a genetic disorder, individuals with first-degree relatives with celiac disease have a higher risk of getting the disorder in their lifetime.

The celiac genes can be passed to family members, so if one family member carries HLA-DQ2 or DQ8, either gene could be passed down to that person’s children. The research is clear:

What this Means for You

If you have a first- or second-degree relative with celiac disease, there are a few things you need to be aware of as you assess your long-term risk for celiac disease.

(1) Watch for Symptoms of Celiac Disease

Celiac disease has dozens of symptoms, from failure to thrive and short stature in children to gastrointestinal issues, joint pain, fatigue, and brain disorders. In this article, 10 Signs and Symptoms of Celiac Disease, you can learn more about what symptoms to watch for.

(2) Get Tested for Celiac Disease

If you suspect you have celiac disease based on experiencing symptoms congruent with celiac disease, you can get tested for the disorder via a blood test.

I highly recommend this simple at-home celiac disease blood test. Once you take the test, you can share and discuss the results with your doctor. This will save you a lot of time – and maybe even some money – by doing the test yourself and then sharing the results with your doctor. (Read more about the accuracy of at-home celiac testing in this article, At-Home Celiac Test: Is It Reliable?)

I took the genetic test and learned I have the more common celiac gene, HLA-DQ2. I also had my daughter take the test; she also has HLA-DQ2. You can watch us take the test on the following CBS News segment:

There are several reasons why you might undergo genetic testing for celiac:

(1) A First Degree Relative Has Celiac

If you have a first-degree relative with celiac but test negative for celiac, you might consider getting a genetic test as a next step to see if you need to continue screening for the disorder or if you’re in the clear. Remember, celiac can “turn on” at any time, so you’ll want to screen yourself regularly.

Years ago, I suspected my son might have celiac disease. He was short, had low energy, and experienced occasional stomach aches.

I’ve tested him for celiac disease multiple times, and the test comes back negative every time. Instead of putting him through annual blood testing, I decided to see if he even carried one of the genes. If he had one of the genes, I would screen him annually. If he didn’t, there would be no need to screen him further.

He underwent this genetic test at his doctor’s office via a blood draw; however, I wish I had known about the EmpowerDX at-home celiac gene test so I didn’t have to put my son through the pain of a blood draw at such a young age.

I discovered that my son doesn’t carry either celiac gene, so we no longer need to screen him for celiac disease. My daughter, however, carries HLA-DQ2, so she will require continued screening.

Many people take a genetic test for celiac disease, especially if they’ve already implemented a gluten-free diet before they underwent celiac testing.

Remember, you must be eating gluten for any celiac disease test to be positive. This is why many people who go gluten free before ruling out celiac disease take the controversial Gluten Challenge, which allows them to get tested for celiac disease after implementing a gluten-free diet.

If you take a celiac disease test while on a gluten-free diet, chances are it will come back negative, even if you have celiac disease.

This happened to me. I tested positive for celiac disease in 2012. However, I took an at-home celiac disease test years later, long after I ditched gluten, and the test came back negative.

If your genetic test is negative for both DQ2 and DQ8 genes, like my son’s test, then you know it’s not celiac disease causing your symptoms, and it’s more likely non-celiac gluten sensitivity.

Curiosity may seem like a trivial reason to get tested, but let me tell you, I’ve always been curious about where the celiac disease gene(s) came from in my family. My mom’s side of the family always complained of stomach issues, like IBS and acid reflux, yet my dad’s side has a history of autoimmune disorders and cancer.

I would love for my parents to get tested for the celiac disease gene so I can know which side of the family it came from.

What Should You Do If You Carry a Celiac Gene?

You can also prevent full-blown celiac disease by following a gluten-free diet, as gluten is the trigger that would “turn on” a dormant celiac gene. There is currently no research suggesting a low-gluten diet would prevent the celiac gene from turning on.

Remember, gluten causes inflammation in all humans, so if you continue to eat loads of gluten, you might experience intestinal permeability or leaky gut and unwittingly turn on those celiac genes.

Does a Negative Genetic Test Rule Out Gluten Sensitivity?

Many still suspect they have an issue with gluten despite testing negative for gluten and/or finding they don’t carry either celiac gene. Or they carry one of the celiac genes but don’t have celiac disease.

When this happens, you likely have what is known as non-celiac gluten sensitivity, commonly referred to as gluten or wheat sensitivity.

While you might intuitively know you have an issue with wheat, there is a great test you can take to know for sure. It’s called the Wheat Zoomer test, and it will test to identify if your body is making antibodies to both gluten and non-gluten components of wheat.

The truth is, even if you don’t have celiac disease, nor carry one of the celiac genes, you can still have an issue with wheat. More than 18 million people in the US have gluten sensitivity; chances are, this estimate is low.

A Few Odds and Ends

Many people have suggested that I use 23andMe to identify if I carry one of the two celiac disease genes.

I have thought a lot about using this service, and while I have considered 23andMe in the past, I am reluctant to do so for various privacy reasons.

I also was hesitant to put my minor child’s DNA information in the 23andMe database. If he wants to do that later in life, he can, but I vow to respect his privacy until he is an adult and has a say in the matter.

What I like about the EmpowerDX Celiac Disease Gene Risk test is that it’s just looking for the celiac genes, and it doesn’t get you wrapped up in full DNA testing.

I’ve been asked several times if insurance covers genetic testing, and it doesn’t (at least mine didn’t). Insurance does not cover at-home testing or other online genetic or health tests.

Some flex spending accounts, like an FSA or HSA, might allow you to use pre-tax funds to pay for such tests. Inquire with your insurance company and healthcare plan to see if this is the case for you.