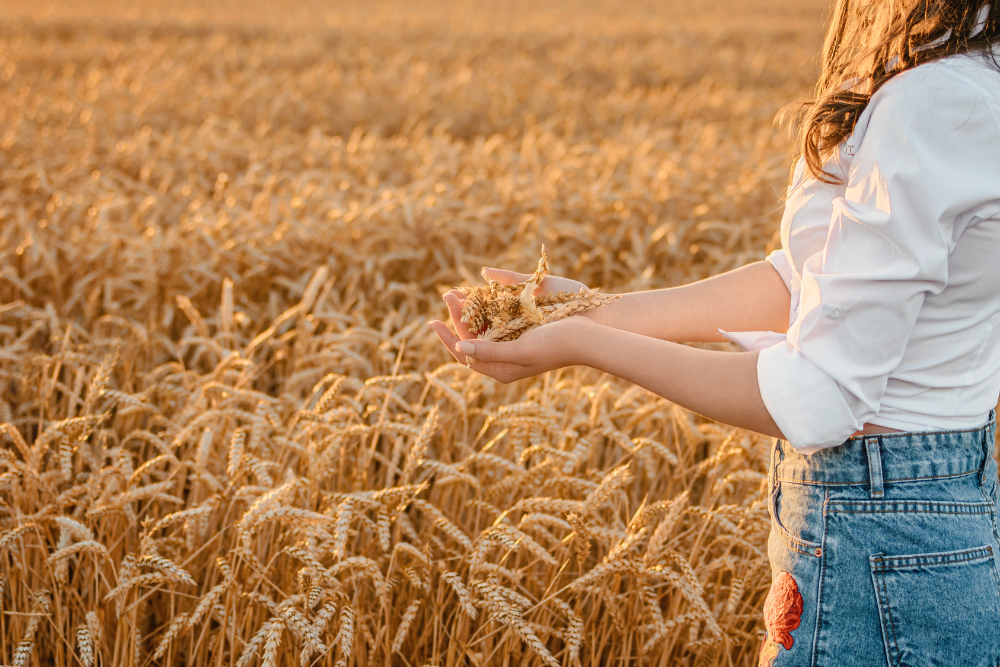 You’ve probably heard stories from people who say they can’t eat wheat in the U.S. but can eat it in Europe.

This rumored phenomenon has led many to believe there’s something wrong with U.S. wheat. Maybe it contains more gluten or chemicals or is processed differently? Whatever the case, many people blame U.S. wheat for the rise of celiac disease, wheat allergies, and gluten intolerance.

I, too, have wondered if there’s something weird about U.S. wheat that has led to spikes in celiac disease and gluten disorders.

In this article, I will explain the similarities and differences between U.S. and European wheat, how wheat has changed over time, and why I think Americans say they can tolerate European wheat during their travels but then feel sick once they resume their regular diets in the U.S.

Remember, people with celiac disease should avoid all sources of gluten, a protein found in wheat, rye, barley, and sometimes oats, regardless of where the gluten comes from. Celiac disease affects one percent of the worldwide population, and the only treatment for this autoimmune disorder is a strict, lifelong gluten-free diet.

Celiac Rates in the U.S. vs. Europe

Before I discuss why some people say they can tolerate wheat in Europe but not in the U.S., I first wanted to understand if the rates of celiac disease differ in the U.S. vs. Europe.

Celiac rates vary from country to country. For example, in Finland, which is located in northern Europe, celiac disease affects 2.4 percent of the population. In Germany, it only affects 0.3 percent, and in Italy, it affects 0.7 percent.

Has Wheat Changed Over Time?

The worldwide incidence of celiac disease has been growing by 7.5 percent per year. And while many people blame changes in wheat for this phenomenon, the truth may not be that simple.

Dr. William Davis, the author of the bestselling book Wheat Belly, says wheat has changed over time through hybridization to help farmers get better grain yields. He says farmers mated wheat with other grasses and, in some cases, the results were “crude, imprecise, and unpredictable,” and potentially worse than genetic modification.

One of the crucial changes, he says, is that hybridization created new forms of the protein gliadin (not gluten), which binds to the opiate receptors of the brain and stimulates the appetite. He says this causes a person to eat more wheat.

While he says, “Wheat is the most destructive thing you could put on your plate,” he does not say it contains more gluten, nor that it has led to more gluten disorders. He says that modern wheat contains more gliadin than ancient wheat, making people want to eat more wheat.

However, researchers concluded that no single wheat type could be recommended as better for reducing the risks of or mitigating the severity of celiac disease or other gluten disorders. The study found that ancient wheat contains less gluten than modern wheat (Triticum aestivum), and the protein and gluten content of modern bread wheat has decreased over time.

While blaming the rise in celiac disease and gluten disorders solely on the changes in modern wheat is a stretch, the rise of celiac disease and other gluten disorders might be better explained by increased awareness, better diagnostic tools, poor gut health, chemicals, and an increasingly poor American diet, which has been connected to a slew of chronic diseases, digestive disorders, autoimmune diseases, and metabolic disease.

Some say they can eat European wheat without issue but then return to the U.S. to find wheat makes them feel sicker than ever. How does one explain this phenomenon, mainly when all wheat contains gluten at the end of the day?

The most common type of wheat in Europe is known as soft wheat. It contains less gluten than hard kinds of wheat. Italy almost exclusively uses soft wheat in its baked goods.

While the lower gluten content in the most common kinds of wheat used in Europe might explain why some people find the cereal grain easier to digest in Europe, it’s important to take such a conclusion with a grain of salt. All wheat contains gluten, and even a crumb of the sticky protein makes people with celiac disease and gluten intolerance extremely sick.

Why Is Wheat More Tolerable in Europe?

Given that the rate of celiac disease is similar in the U.S. and Europe, and both types of wheat contain gluten, albeit in varying amounts, what might explain why people say they can tolerate gluten in Europe but not in the U.S.?

I’ve scoured the Internet to curate a few possible explanations:

One possible explanation for this phenomenon might be attributed to the fact that Americans consume more wheat, or should I say more food, in general.

However, when an American travels in Europe, experts say they’re probably eating smaller portions that are easier to digest and don’t over-tax the digestive system.

Refined grains are one such inflammatory food that has been linked to higher levels of inflammatory markers in the blood.

Furthermore, highly-processed refined grains (like those found in bread and baked goods) quickly convert to sugar upon digestion. Sugar has been linked to gut dysbiosis, blood sugar spikes, weight gain, and inflammation.

One potential explanation for why people say they can tolerate wheat in Europe might be that the food, in general, may be cleaner.

The EU has banned a laundry list of food additives, preservatives, and synthetic dyes, many of which are still approved and regularly used in foods made in the U.S.

Here are a few of the ingredients banned in Europe but allowed in the U.S.:

(3) Foods May Be Prepared Differently

You might also be enjoying freshly baked artisan sourdough bread, which contains lactobacilli that helps to break down gluten molecules and make the bread more digestible. These fresh-baked foods don’t contain preservatives; instead, they’re made with simple, clean ingredients that are likely gentler on the tummy.

There are a few other reasons why traveling in Europe might be kinder on your digestive tract.

For starters, you might be moving around more, especially after meals. Walking after meals has been shown to aid in digestion.

Furthermore, you’re probably stressing less. You’re relieved of day-to-day stress; numerous studies have tied stress to poor digestion and gut health. Instead, your days might be filled with leisurely meals and enjoying the sights and sounds of the world. Fresh air and laughter might be the best medicine for keeping tummy woes at bay.

(5) A Healed Gut Can Tolerate [Some] Wheat

It’s possible that some people can tolerate wheat on vacation because they have strong, sealed guts after having avoided wheat for so long. A healthy, strong gut is likelier to tolerate a minor gluten assault. However, when you return home, your gut has begun to deteriorate due to all the wheat exposure, and that’s when your symptoms start to re-emerge.

Remember, only some people will be able to tolerate a little wheat. Most people with gluten intolerance will become more intolerant to wheat due to a loss of oral tolerance, which I explain in detail in this article. For those who are truly wheat intolerant, even a crumb of wheat will make you feel worse and escalate your once-calmed symptoms.

Do You Really Want to Test It?

If you’re headed out on a once-in-a-lifetime European vacation, ask yourself, “Do I really want to test my gluten intolerance and potentially ruin my vacation?”

What if your gluten intolerance has increased due to a loss of oral tolerance, and you wind up pooping your pants, bloated and sluggish, and/or stuck in your hotel room for days due to raging symptoms?

I have celiac disease, so I’d never touch the g-stuff. But for those with gluten (wheat) intolerance, you’ll have to weigh the pros and cons of cheating on your gluten-free diet during your European travels. Hopefully, you won’t regret your decision.