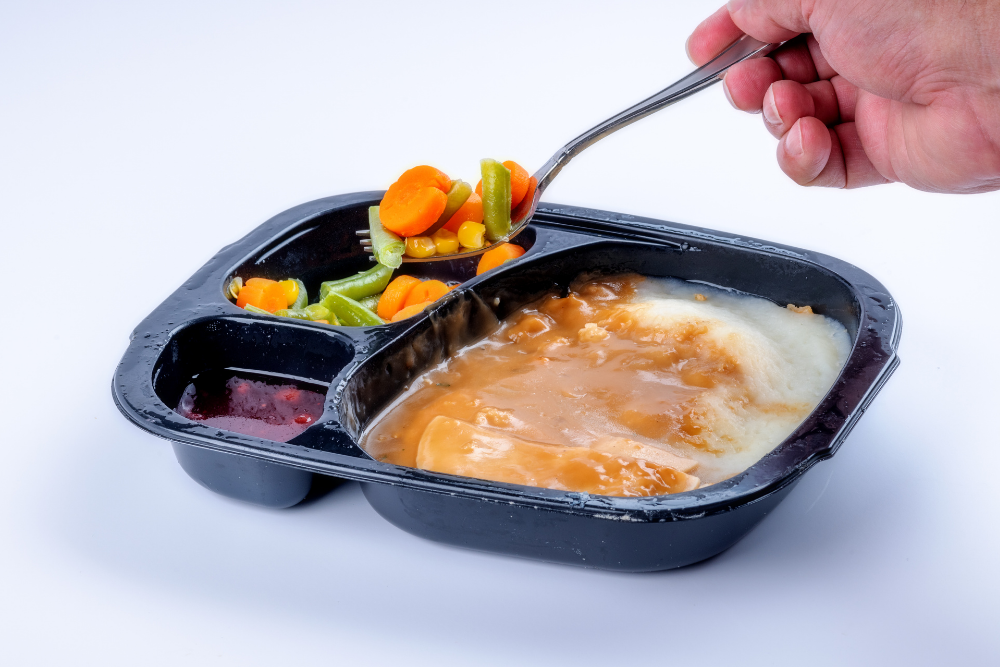 This post includes a list of brands that offer gluten-free frozen meals, and I’ve tested several of the meals for hidden gluten using my Nima Sensor. Please see my disclosures. This post may contain affiliate links.

While many TV dinners are off-limits because they contain gluten, a sticky protein found in wheat, rye, barley, and sometimes oats, more than a dozen brands offer gluten-free frozen entrees safe for you to consume even if you have celiac disease or gluten sensitivity.

Unfortunately, only a handful of them is certified gluten free by a third-party certifying agency, but all say they meet the FDA guidelines that require them to contain 20 parts per million (ppm) of gluten or less.

If gluten-free frozen entrees aren’t your thing, but you’re looking for a convenient, pre-packaged, gluten-free safe meal, check out Freshly.

Freshly is a meal delivery service that ships you pre-made meals made with clean and healthy ingredients, and all of Freshly’s gluten-free labeled meals are certified gluten free by the Gluten Intolerance Group. You can get 30 percent off your first week with Freshly by signing up with this link.

However, if you’re still looking for a grocery-store frozen entree, check out what the following brands say about gluten. Please make special note of the following:

Did you know that many Lean Cuisine frozen entrees are labeled gluten free on the front of the packaging? I found a handful of gluten-free labeled Lean Cuisine’s at my local King Soopers (Kroger store), and according to the Lean Cuisine website, there are nine listed, including:

Please note these frozen entrees are not certified gluten free by any third-party organization. This means Lean Cuisine has verified they contain less than 20 ppm of gluten per the FDA gluten-free labeling requirements.

I decided to independently test one of the frozen entrees for hidden gluten using my Nima Sensor, a portable gluten-detecting device that you can learn more about in this article, What You Need to Know About Nima Sensor Before You Buy.

A smiley face (as pictured below) means no gluten was found. (If Nima finds gluten, it displays a “Gluten Found” message and wheat symbol.)

Life Cuisine is an offshoot Lean Cuisine brand that offers a line of high-protein, low-carb and gluten-free options. Please note not all Life Cuisine entrees are gluten free.

According to the company, there are seven Life Cuisine frozen entrees labeled gluten free (not certified gluten free), including:

A brand many people in the gluten-free community know, and trust is Amy’s Kitchen, which offers a variety of frozen entrees and soups labeled gluten free. Amy’s says on its website that “gluten free is practically our middle name.”

Amy’s Kitchen boasts more than 100 gluten-free products and was one of the first companies to make pre-packaged convenience foods for the gluten-free community.

You can view a complete list of gluten-free labeled frozen entrees on the Amy’s Kitchen website. There are too many to list here, but a few notable gluten-free frozen meals include:

As you can see, Amy’s Kitchen channels flavor from all over the world to meet a variety of tastes and preferences.

A few important notes about Amy’s Kitchen. First, the company’s products are not certified gluten free by a third party; they’re only labeled gluten free.

Second, Amy’s Kitchen does not use a dedicated gluten-free kitchen. The company is transparent in that it uses a shared manufacturing facility to produce its gluten-free foods.

Specifically, Amy’s Kitchen says, “For all of our gluten-free items, we have numerous safeguards in place to assure that the items meet the FDA definition. We know that some consumers may be so sensitive to gluten that they may choose to avoid any food that could contain any gluten, even less than 20 ppm.

“For this reason, we alert consumers that our food is made in a shared facility in the event that they wish to avoid such items. We take our obligations in this regard very seriously, and are happy to answer any questions you may have or provide additional information if it would be useful.”

I independently tested an Amy’s Kitchen frozen entree with my Nima Sensor, and you can see the results below. Again, a smiley face means no gluten found.

Stouffer’s seems to be dipping its toe in the gluten-free market with the launch of a single gluten-free entree, its gluten-free frozen mac and cheese meal. The gluten-free packaging has a large splash of green on it to help it stand apart from the other Stouffer’s frozen meals, which all contain gluten.

Please note that while the entree is labeled gluten free, it’s not certified gluten free by a third-party certifying agency.

I tested Stouffer’s gluten-free mac and cheese for hidden gluten with my Nima Sensor. As you can see, Nima didn’t find any gluten.

Another frozen entree brand to add to your list is Blake’s. Blake’s makes a few hard-to-find frozen meals, including:

According to Blake’s website, the company works to “…validate the segregation and cleaning methods in our facility with testing.” It says that during the production of its gluten-free meals, “we periodically test them to ensure that the presence of gluten is less than 20 ppm.”

After sorting through the frozen food aisle at my local grocery store, I was surprised to see that Healthy Choice had several gluten-free frozen meals, all clearly labeled gluten free. (None are certified gluten free.)

While I could not find Udi’s frozen entrees in my local grocery store, I’m pleased to share that Udi’s makes several certified gluten-free frozen meals, including:

Cedarlane makes a variety of specialty frozen entrees to cater to the gluten-free, keto, paleo, high-protein, and vegetarian communities.

Remember that only some Cedarlane frozen meals are gluten free, so look for the “gluten-free” label on the front left corner of each entree.

Some of the gluten-free frozen entrees include:

I keep hearing about an up-and-coming brand called Red’s, which offers a line of gluten-free frozen entrees and breadless breakfast sandwiches. Be sure to look for the “gluten-free” label to avoid confusing them with the brand’s non-gluten-free entrees.

While none of the products are certified gluten free by a third party, Red’s says on its website, “With all of our gluten-free items, we adhere to the FDA’s strict Allergen Cross-Contact Prevention guidelines to ensure safeguards are in place to control incidents of cross-contamination.”

Gluten-free entrees from Red’s include:

Beecher’s is known for cheese, and it has two cafes in high-profile U.S. cities, including Seattle’s Pike Place Market and New York’s Flatiron district.

If you cannot travel to either coastal city, you can enjoy Beecher’s frozen mac and cheese entree. I spotted it at Safeway, Kroger, and Sprouts near me.

Forks Over Knives is a popular community dedicated to the plant-based lifestyle. It’s also the name of a film, a best-selling book, and a movement.

There are three Forks Over Knives frozen entrees available on the market today. All are whole food, plant-based frozen entrees, but only the following two frozen meals are labeled (not certified) gluten free:

Primal Kitchen has a line of frozen entrees catering to the Whole30 and paleo communities. Several of their frozen entrees say they contain “no gluten, grains or soy.” Any food item that says “no gluten” is held to the same labeling standards as set forth by the FDA, which means a product must contain 20 ppm of gluten or less to make that claim.

Starlite Cuisine is another specialty brand of frozen meals, and the brand’s enchiladas and taquitos are gluten free (other products by Starlite are not gluten free).

The company says it does not have an official gluten-free certification, but it sends samples to an independent lab to ensure the products contain no more than 20 ppm of gluten per the FDA gluten-labeling guidelines.

Scott & Jon’s are known for making “healthy” frozen meals that contain under 300 calories and only simple ingredients.

Some products say “gluten free,” whereas others say “made without gluten ingredients.” None are certified gluten free by a third party.

Entrees made without gluten include:

Always read labels carefully to determine if a Smart Ones frozen entree is safe for you to consume on a gluten-free diet.

Brands of Frozen Entrees to Avoid

Avoid the following brands of TV dinners, as they do not offer gluten-free options at this time:

You might enjoy these articles about other gluten-free products:

And learn more about the Nima Sensor in these articles: