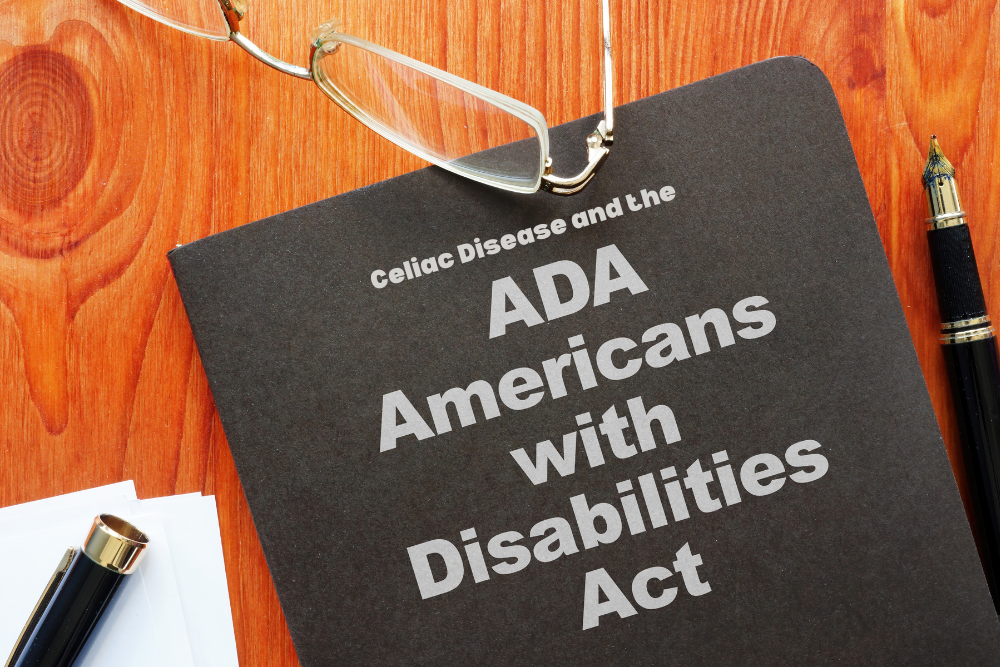 Curious if celiac disease is a disability and covered by the Americans with Disabilities Act? I’ll explain how, in many cases, celiac disease is classified as a disability, and how that impacts workplaces, schools, camps, restaurants, prisons, and other places where food is served. Please see my disclosures.

Celiac disease is an autoimmune disease that impacts an estimated three million Americans. When a person with celiac disease eats gluten, a protein found in wheat, barley, rye, and sometimes oats, their immune system becomes confused and mistakenly attacks the tissue surrounding the lining of their small intestine. The small intestine is an essential organ responsible for “feeding” every cell and organ in the body.

People with celiac disease must follow a strict, gluten-free diet to not only manage their disease but also to manage their annoying and sometimes painful symptoms, which can range from intestinal and digestive issues and skin disorders to nutritional deficiencies, brain disorders, and more.

Given the fact that celiac disease impacts so many Americans, and the only way to manage the disorder is via a strict gluten-free diet, many wonder if celiac disease is classified as a “disability” by the Americans with Disabilities Act (ADA).

What the ADA Says

In 2008, President George W. Bush signed the ADA Amendments Act of 2008 (ADAAA) into law, which amended and expanded the definition of a disability to protect a greater number of people. Under the ADAAA, people with disabilities include those with eating impairments as well as those with impairments related to “major bodily functions.”

While celiac disease, gluten sensitivities, and food allergies aren’t specifically mentioned by name in the ADAAA, they are implied to be included because they are disorders that affect major bodily functions, such as eating, along with functions of the gastrointestinal system. This, in theory, includes individuals who experience an autoimmune response to specific foods (celiac disease) and those who experience difficulty swallowing, breathing, or anaphylactic shock due to food.

In an ideal world, many hoped this would require food establishments, such as restaurants, to accommodate gluten-free diners as they accommodate wheelchairs and visually impaired patrons, but in reality, it only provides some protection in specific scenarios. In fact, the ADA does not require every restaurant that serves food to provide gluten-free or allergen-free food. More on that in a bit.

That said, there are a few scenarios where the ADA might offer some protection, and more importantly, inclusion, to the gluten-free community.

If a person is incarcerated and therefore unable to access meals on his or her own, the ADA would protect that person’s right to gluten-free meals. A former Washington prisoner with celiac disease, Gaven Picciano, is currently suing a Washington jail for failure to provide him gluten-free food during his period of incarceration.

Individuals sailing on a cruise ship won’t have access to food outside of what the ship provides and therefore the ADA requires cruise lines to offer gluten-free options.

Keep in mind, however, that it may not be easy to get gluten-free food on a cruise ship, and individuals will need to speak up before boarding the ship and at every meal. (A great option is to book a cruise through Celiac Cruises, which offers cruises with a dedicated gluten-free dining room.)

The ADA prevents an employer from not hiring an individual because they have celiac disease. It also may require an employer to provide a gluten-free meal if meals are being provided for other employees.

While in a perfect world, this would be obvious to employers, most people with gluten disorders will have to work hard to convince employers to not only provide gluten-free options but also advise them how to do so safely.

The ADA also will ensure an employer accommodates the need for more restroom breaks, if needed and requested, due to celiac disease or other digestive disorders.

While the ADA doesn’t require public schools to provide gluten-free meals for children, the Rehabilitation Act of 1973 provides protections for children with disabilities. It puts forth guidelines for how accommodations can be made for children with special needs, including special diets, in the form of a 504 plan.

A 504 plan is a document that outlines necessary accommodations and modifications requested for a child with special needs attending public school.

In December 2012, the ADA was put to the test with its first food allergy-related case. Lesley University in Massachusetts, a private nonprofit university, mandates students living on campus to pay for and participate in its meal plan system.

The case against Lesley University found that the school failed to make “necessary reasonable modifications in policies, practices, and procedures to permit students with celiac disease and/or food allergies to fully and equally enjoy the privileges, advantages, and accommodations of its food service and meal plan system.”

The University settled with the U.S. Department of Justice and agreed that university students with food allergies and celiac disease can fully access the university’s meal plans and food services. Additionally, the University agreed to improve its food practices to enable students with food allergies and celiac disease to obtain safe and nutritional foods, and the school paid $50,000 in compensatory damages to the students who brought forth the suit.

Another lawsuit found Rider University violated Title III of the ADA by “failing to make reasonable modifications to its policies, practices, and procedures for students with food allergy-related disabilities. The matter originated from a complaint by a former Rider student with celiac disease.

The U.S. Attorney’s Office determined that Rider University failed to provide reasonable modifications to its policies, practices, and procedures for students with food allergy-related disabilities and failed to adequately train its staff on appropriate policies for accommodating individuals with food allergies. Since the beginning of the investigation, Rider University has worked cooperatively to develop and amend its policies and practices to comply with the ADA.

Title III of the ADA would cover privately-run child care centers and calls for childcare providers to provide children with disabilities an equal opportunity to participate in the center’s programs and services, even if it means the center has to make reasonable modifications to its policies and practices. (Title II of the ADA (504 plans) would cover summer programs and before and after-school programs provided by public schools that receive federal funding.)

The exception is child care centers run by religious entities, such as churches, mosques, or synagogues. Such activities controlled by religious organizations are not covered by Title III.

The ADA does not require restaurants to offer gluten-free accommodations, which can often feel isolating to a gluten-free eater.

That said, most restaurants don’t allow diners to bring outside food into their establishments. This is understandable, as a restaurant has specific health and safety standards to maintain, and allowing someone to bring in outside food undermines the entire business focus of a restaurant.

The district court originally found that the restaurant did not violate the ADA because the restaurant would have provided the child with a gluten-free meal and therefore full and equal enjoyment of the restaurant. The family appealed this decision and won, which moves the case back to the District Court in Virginia for a jury trial.

This is not the only court case challenging the expanded definition of the ADA and what is and isn’t considered a “disability.” In fact, there are several other pending cases, including:

Depending on the results of these cases, they may have a big impact on what restaurants must “reasonably” do to accommodate their food-challenged diners.

Also, it could either lead to more vigilance from restaurant staff when it comes to serving food-challenged diners, or it could result in more restaurants denying accommodations altogether to those with food allergies, intolerances, and celiac disease. Only time will tell.

A private summer camp may not be required to provide gluten-free accommodations to campers with celiac disease or gluten sensitivity. The reason is twofold.

First, camps may not consider it a “reasonable” modification to have to provide a separate meal for one camper when a busy summer camp is responsible for feeding hundreds of children simultaneously.

Second, a camp may say attendance at their camp is a choice, and therefore a parent or child could choose a different summer camp that is known to accommodate individuals following special diets.

While there isn’t a lawsuit testing the ADA’s pull when it comes to summer camps, should a camp be sued one day for denying a child “reasonable” accommodations, the Lesley University settlement will most certainly serve as a precedent case.

Anecdotally, my friend tried to navigate this issue for her celiac daughter. Her daughter had attended a 6-week sleepaway camp on the East coast for many years before she was diagnosed with celiac disease at the age of 13. When my friend asked if the camp would accommodate her now celiac daughter with gluten-free meals, the camp owner told her he couldn’t accommodate her given the chaos of feeding thousands of campers at one time.

Can People with Celiac Disease Qualify for Disability Benefits?

By classifying celiac disease as a “disability”, the ADA has created a grey area in determining if someone with celiac disease could qualify for Social Security disability benefits as well.

In order to qualify for disability benefits, an individual must prove, through detailed documentation, that their disability has hindered them from being able to work for one year or longer, and that inability to work is directly related to or caused by celiac disease. They must also prove they sufficiently followed their doctor’s orders.

Given that celiac disease is managed through a gluten-free diet, and the vast majority of people are able to function normally with the disorder, it would be a long shot for someone to qualify for disability benefits solely because they have celiac disease.

It would be important, however, for the person to work with their doctor – and potentially legal counsel – to get the proper documentation when a strong case can be made for disability benefits.

In many cases, yes, celiac disease, along with gluten intolerance and food allergies, would be considered a disability and is somewhat protected by the Americans with Disabilities Act. However, the ADA only says “reasonable” accommodations need to be made, and in many cases, the word “reasonable” is open to interpretation.