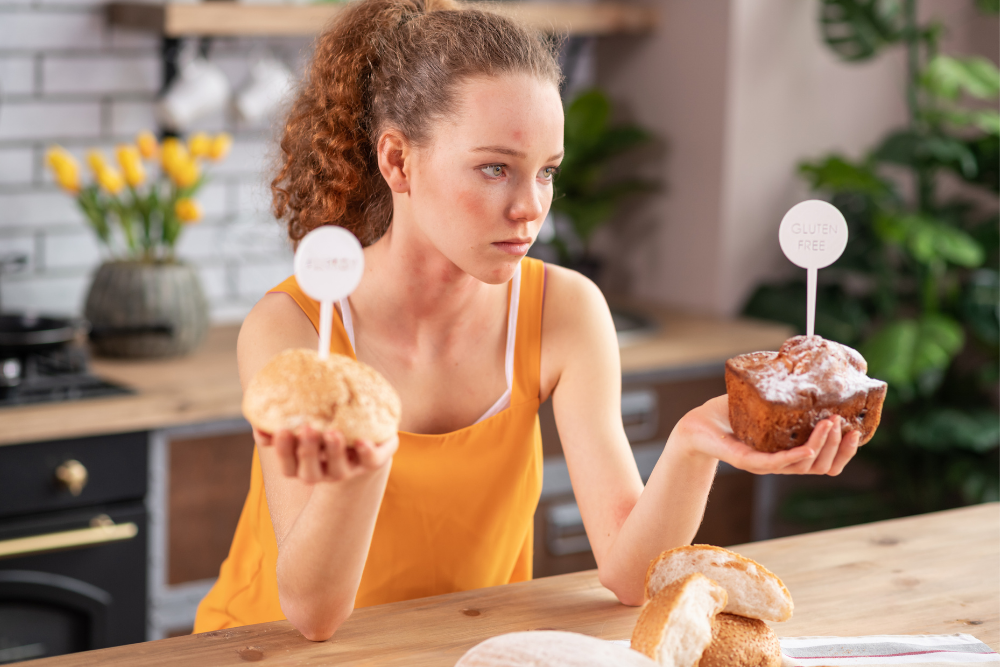 Before we talk about all things gluten, it’s important to know that there is no such thing as a gluten allergy.

No, my friends, you cannot be “allergic” to gluten.

In fact, no one is “allergic” to gluten.

Gluten is a sticky protein found in wheat, barley, rye and sometimes oats and is not a recognized allergen.

That said, wheat, barley, rye and oats could be allergens, and wheat is considered one of the top eight allergens in the U.S.

Why Do People Say “Gluten Allergy”?

If a gluten allergy is not real, you may be wondering why people say they have a “gluten allergy”. How did this expression become part of our everyday vernacular?

I believe the reason the term “gluten allergy” has become so commonplace is that most people understand the word “allergy.” They know an allergy is a serious and life-threatening disorder. When someone says “I have a gluten allergy,” they’re taken seriously from the start.

Many people in the gluten-free community, therefore, resort to speaking the language widely recognized by others, including restaurant staff.

This is why they say, “I have a gluten allergy,” when placing their order at a restaurant. The staff immediately understands what the person is trying to communicate and the seriousness of the request.

If, however, you told the server working behind the register at Chick-fil-a, “I have autoimmune condition known as celiac disease that requires me to eat a strictly gluten-free diet,” he’d look at you like you had two heads!

On top of that, unfortunately, if you tell someone you have a gluten intolerance or sensitivity, you may not be taken as seriously as someone who says, “I have a gluten allergy.”

Even though gluten sensitivity is a very real and serious disorder, those who don’t suffer from it just don’t get it.

What is a Wheat Allergy?

While a gluten allergy is not a real condition, a wheat allergy, on the other hand, is a very real condition. Wheat allergies, however, impact far less people than celiac disease and gluten sensitivities. Approximately 0.1 to 0.3 percent of the U.S. population or 900,000 people have a wheat allergy according to Dr. Alessio Fasano in his book, Gluten Freedom.

Wheat, along with barley and rye, contain a protein called gluten. Someone who is allergic to wheat might still be able to eat barley, rye and other gluten-containing products. They only must avoid wheat. (Read: What is Gluten and Why is it Bad for Some People?)

What is an Allergy?

An allergic reaction occurs when the body’s immune system views a substance as harmful and therefore overreacts to it.

If you have an allergy to something in the environment or food supply, your immune system produces an antibody called immunoglobulin E (IgE).

Some allergies cause annoying but non-life threatening reactions such as watery eyes, itching, sneezing or hives. More serious and troublesome symptoms can be swelling in the mouth, trouble breathing and a life-threatening reaction called anaphylaxis.

Food allergies are very common and can trigger a harmful immune system response.

In fact, more than 170 foods have been known to trigger an allergic reaction in humans, and the eight most common food allergens are milk (dairy), egg, peanut, tree nuts, wheat, soy, fish and crustacean shellfish – these foods are responsible for most of the serious food allergy reactions in the United States.

According to Food Allergy Research and Education (FARE), up to 32 million Americans have food allergies, including 5.9 million children under the age of 18.

This means one in 13 children, or roughly two children in every classroom, have a food allergy. About 30 percent of children with food allergies are allergic to more than one food.

Unfortunately, food allergies are on the rise.

Because wheat is one of the most common allergen foods in the U.S., it must be disclosed, as required by federal law, on packaged foods that contain wheat. You can learn more about gluten and allergen labeling in my article, Learn How to Decode Food Labels.

Gluten, however, is not considered an “allergen” (as discussed) so it does not have to be disclosed, by law, on food labels.

This means a portion of the food can be free from wheat but still contain gluten in the form of barley, rye or even oats. For example, Rice Krispies does not contain wheat, but it contains barley malt (aka, gluten).

On the other hand, while most granola bars contain oats, they don’t disclose that the oats likely contain wheat through cross contamination. (Read: Are Oats Gluten Free?) If you have a wheat allergy, you must also avoid oats unless labeled wheat-free or gluten-free.

What is an Autoimmune Disease [and Celiac Disease]?

I’ve written extensively about autoimmune disease in the past, particularly in my book, Dear Gluten, It’s Not Me, It’s You! and in my review of Dr. Tom O’Bryan’s book, The Autoimmune Fix.

Dr. O’Bryan says autoimmunity occurs when the body attacks itself and causes organ and tissue damage unto itself. Symptoms can begin early in life and are sometimes subtle – joint pain, weight gain, brain fog, gut imbalances, depression, mood disorders, and fatigue. These are just some of the symptoms that indicate autoimmune disease is either bubbling or fully present in one’s body.

Autoimmune disease affects eight percent of the U.S. population or 24 million people, 78 percent of which are women. However, the number of autoimmune sufferers is likely much higher due to the difficulties in diagnosing autoimmune disorders.

Celiac disease is classified as an autoimmune disease. When a person with celiac disease ingests gluten (the “trigger” food), his or her body becomes confused and initiates an immune system attack on the healthy tissue surrounding the small intestine. This results in intestinal damage and villous atrophy in someone with celiac disease.

The villi that line the small intestine serve an essential role in the digestive system as they soak up nutrients from food and deliver those nutrients where they need to be to keep you healthy.

The villi in someone with celiac disease are completely worn down and look more like a flat surface than a shag carpet.

An autoimmune disease, while just as serious as an allergy in many ways, causes damage to the body over time and puts someone at risk for acquiring more serious diseases like cancer, diabetes, heart disease, Alzheimer’s and early death.

What is Gluten Sensitivity or Intolerance?

When someone is sensitive to gluten or gluten intolerant, it means they experience some sort of inflammatory response every time they consume the gluten protein.

Unlike people with celiac disease who have villous atrophy upon ingesting gluten, people with gluten sensitivity have more normal looking and functioning microvilli, albeit their intestines are often inflamed.

Anyone telling you that gluten sensitivity isn’t a serious condition is truly misinformed. The research is growing and should not be ignored. (I highly recommend The Autoimmune Fix by Dr. Tom O’Bryan for more information on this topic.)

How Do You Know If You Have a Gluten Allergy?

I also recommend getting tested for celiac disease before eliminating gluten from your diet. I explain why in this article, STOP! Don’t Go Gluten Free Until You Read This Article.

You can get tested for gluten sensitivity via a blood test, although please note some of the testing methods today are still fledging. Learn more about testing for gluten disorders in this article, Understanding and Testing for Gluten Sensitivity and Gluten Intolerance.

Sometimes gluten sensitivity testing is not necessary and you can simply see how you feel by eliminating gluten from your diet for 4-6 weeks, then reintroducing gluten slowly back into your diet.

If you choose to do an elimination diet to test for gluten sensitivity, I highly recommend working with a celiac disease or gluten-free practitioner to guide you through the process.

A Gluten Allergy Isn’t Real, but…

I hope from this article you now understand that a “gluten allergy” is not a real condition; however, the wording is used to help explain and express the seriousness of one’s gluten-free diet to a server or layman.

All gluten spectrum disorders adversely impact someone’s life and strict adherence to a gluten-free diet (or wheat-free diet for someone with a wheat allergy) is required at all times. (Some wheat starch is considered gluten free, be careful with “gluten-free” labeled foods if you have a wheat allergy.)

A serious allergic reaction can be immediately life-threatening to someone with a wheat allergy, while someone with an autoimmune disease or gluten sensitivity will endure long-term damage that endangers the quality and length of their life over a period of years, even decades.

Despite the fact that a wheat allergy, celiac disease and gluten sensitivity are all serious disorders, each must be managed through diet.

I hope this article was able to shed light on this important topic so you gain greater insight into how these gluten-spectrum disorders work and affect your body.