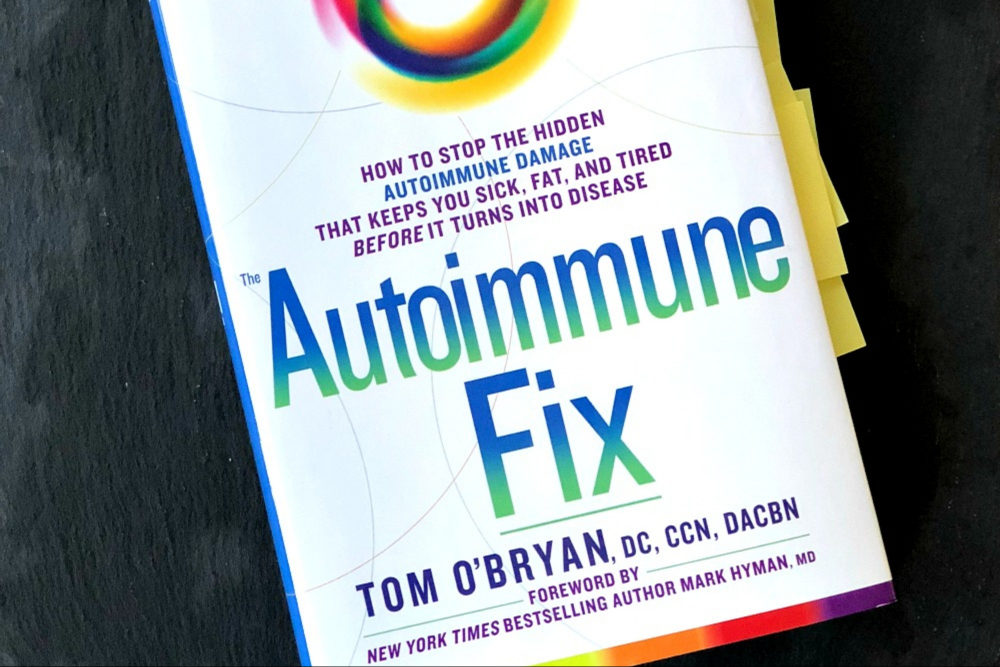 Dr. Tom O’Bryan has won me over (again) in his new book, The Autoimmune Fix, where he makes it clear that you can arrest autoimmune disease, stopping it in its tracks, before it turns into a life-threatening condition.

If you’re suffering from any sort of chronic condition, autoimmune disease or a gluten sensitivity or intolerance, I believe this is one of the most important books you’ll ever read. In fact, I think it should be mandatory reading for any one who thinks they might be on the autoimmune spectrum.

Dr. O’Bryan says autoimmune disease is widespread and on the rise in the U.S.

In fact, there are hundreds of classified autoimmune diseases, many which are hard for doctors to diagnose, treat and manage.

When you complain to your doctor about chronic indigestion, migraines, joint pain, fatigue and itchy skin, chances are you have some sort autoimmune condition.

Related Reading: STOP! Don’t Go Gluten-Free Until You Read This!

Unfortunately, very little is known about how to successfully treat autoimmune disease. Your doctor may give you painkillers, ointments, and/or pills to treat the symptoms, but there is little else he or she can do or knows how to do to help you. In fact, no one knows for certain the root cause of most chronic conditions.

However, if you’re trying to get to the root cause of why autoimmune is occuring inside your body, Dr. O’Bryan might just be the one doctor to give you the clues you need to figure it out.

In The Autoimmune Fix, Dr. O’Bryan explores the root cause of autoimmune disease, as well as offers some of the most well-researched (this book has 12 pages of endnotes!) and most up-to-date information on how one can prevent autoimmune from developing in the first place.

And, if disease has already taken hold in your body, Dr. O’Bryan will teach you how to put your chronic symptoms to bed so you keep more serious, life-threatening illnesses at bay. 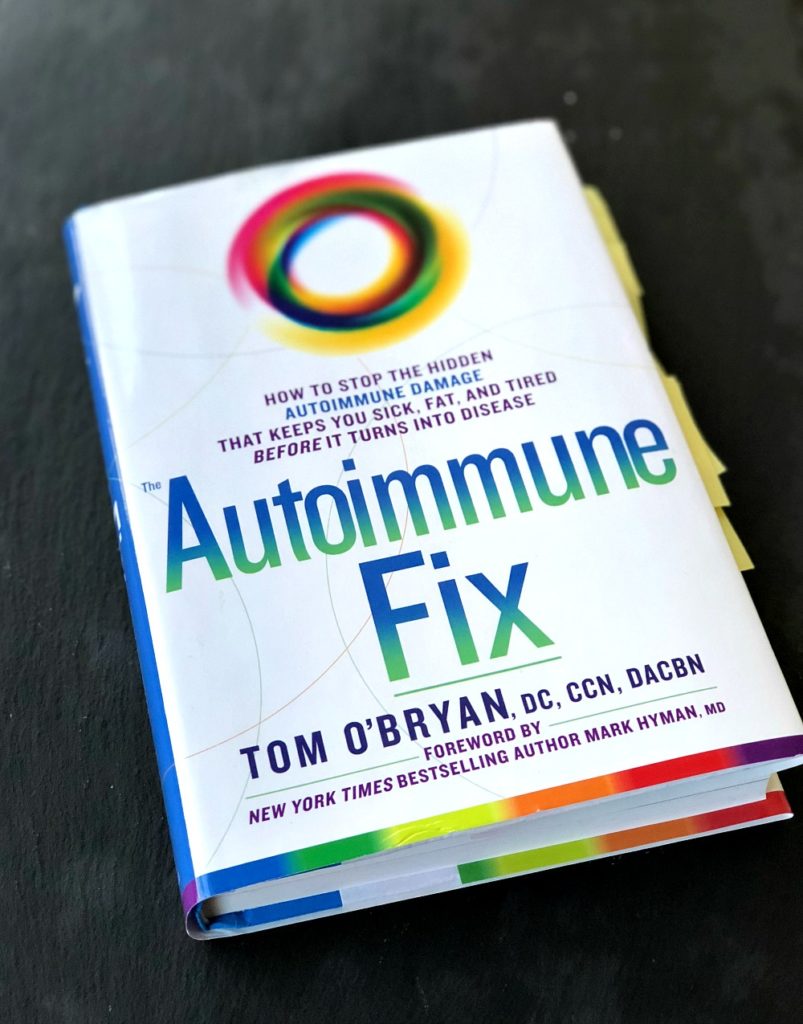 To truly understand this book, you must first know Dr. O’Bryan. Dr. O’Bryan has been studying autoimmune disease and gluten disorders for 30 years. This book is a culmination of his three decades in practice helping people manage chronic illness through diet.

As a trained chiropractor, Dr. O’Bryan says in his book that it didn’t take long before he realized that his focus (or calling) was going to be less about manipulating bones and muscles but more so focused on diet, nutrition, environment and everything under the umbrella of what we call “functional medicine” today.

While still in school, Dr. O’Bryan says he and his wife were trying to conceive a child with no success. He says he picked up the phone and called seven of the most well-known holistic doctors he could find in search of answers.

One of the doctors he spoke with told him something “radical” at the time – his advice was for Dr. O’Bryan, and his wife, to follow a gluten-free diet. The couple immediately cut out the gluten and in six weeks, they were pregnant.

Word got around and by the time Dr. O’Bryan opened his practice in 1980, 33 women were already in line ready to be Dr. O’Bryan’s first patients. One by one, he helped to resolve each woman’s health challenge just by changing what they did or didn’t eat.

“Back then, science had no accepted way of confirming this, but I knew what I saw:  Hundreds of my patients were responding favorably to a gluten-free diet,” he wrote in The Autoimmune Fix.

What is Autoimmune Disease?

I need to back up a bit and explain a bit more about the basics of autoimmune disease.

Autoimmunity occurs when the body attacks itself and causes organ and tissue damage to once healthy tissue, says Dr. O’Bryan.

The symptoms of autoimmunity often begin early in life and are subtle – joint pain, weight gain, brain fog, gut imbalances, depression, mood disorders and fatigue are just some of the symptoms that most people ignore until they brew and bubble over in adulthood.

Autoimmune disease impacts eight percent of the U.S. population or 24 million people – 78 percent of which are women.

Most people shrug off their aches and pains as stress, lack of sleep, or the thing that happens as you age.

But Dr. O’Bryan is calling BS on these notions that such symptoms are just a part of life or normal aging.

Rather, Dr. O’Bryan says autoimmunity is something that happens over time, and if ignored, will eventually turn into even more devastating diseases such as diabetes, cancer, Alzheimer’s and heart disease. Most people get diagnosed with these serious diseases only after significant tissue damage has already occurred!

The root cause of autoimmune disease is inflammation, and Dr. O’Bryan’s comprehensive work on this subject demonstrates that all inflammation is triggered by some sort of sensitivity to gluten, another food sensitivity, and/or environmental exposures – all which pour “gasoline on the fire.”

Dr. O’Bryan says the science is clear. “You can arrest and eventually reverse the damage of many autoimmune diseases when you stop throwing gasoline on the fire.”

Dr. O’Bryan presents a compelling case about the root cause of autoimmunity. He offers well-documented proof that gluten – along with other potential food sensitivities – are overwhelmingly making people sick.

In one case, Dr. O’Bryan discusses research from Dr. Alessio Fasano, a leading celiac disease researcher. In this research, Dr. Fasano’s team showed that no human is able to fully digest the gluten protein found in wheat, rye and barley, and these grains cause inflammation and intestinal permeability in every human who ate them (read more about why gluten is toxic to all humans in this article).

Gluten, however, isn’t the only wrecking ball compromising our health.

Dr. O’Bryan discusses the role of excess sugar in chipping away at one’s health, and he makes the case for why dairy might be a suspect too.

Once someone eliminates the “big three” foods (gluten, sugar and dairy), Dr. O’Bryan says (based on his 30 years of experience) that they can quiet inflammation, rebuild damaged tissue, and begin to finally restore and heal the gut.

Dr. O’Bryan spends a lot of time talking about the importance of gut health in this book, something I’ve talked a great deal about too.

While Part I of The Autoimmune Fix is dedicated to setting the stage of why autoimmune disease has affected so many people and what might be the problem, Part II offers a solution – a “Transition Protocol” – which Dr. O’Bryan created to help autoimmune sufferers improve – and even turnaround – their ailing health.

He explains, “One of the most far-reaching, impactful changes we can make to our environments is to avoid foods that harm us and introduce foods that help us.”

The Transition Protocol offers a week by week program that readers can easily follow to begin the process of optimal healing. He offers an array of foods to eat that will help your body restore and regenerate, as well as boost your immune system. He also offers plenty of healing recipes and simple meal plans to follow.

Overall, Dr. O’Bryan’s message is, “Take away the bad stuff, including highly processed foods, and add in the good stuff:  Whole, real foods that are easy to find and prepare.”

Yep, it’s as simple as that… but you’ll have to read The Autoimmune Fix for details on how to strategically and methodically implement these changes.

And, once you read the book, you’ll have total understanding of what is going on inside your body and how to fix it for good!

If you suffer from any sort of chronic inflammation, chances are you’re on the autoimmune spectrum, too. As you continue to eat foods you are sensitive to, your aches and pains will continue to grow and turn into more serious, life-threatening conditions.

But, with Dr. O’Bryan’s well thought out program, you can squash the inflammatory fire inside of you, arrest autoimmune disease before it starts (or spreads), and turn your health around for the better. All you have to do, at the end of the day, is change what you do (and don’t) put on your plate.

Related Reading: How I Healed Myself from Celiac Disease

I’ve never read a book that so personally spoke to me as The Autoimmune Fix. Dr. O’Bryan’s easy-to-understand, plain-speak gets right to the heart of what matters most… and that is getting you healthy.

I only wish this book was available when I was diagnosed with celiac disease in 2012. Every doctor, dietician, nutritionist, health coach and health professional should give a copy of this book to their clients suffering from autoimmune disease and/or gluten sensitivities (I know I will!). As I said before, it should be required reading.

I hope you’ll read The Autoimmune Fix – I know it will help you achieve good health, and, after all, isn’t that what we all want (and need) at the end of the day?

You can purchase The Autoimmune Fix on Amazon.