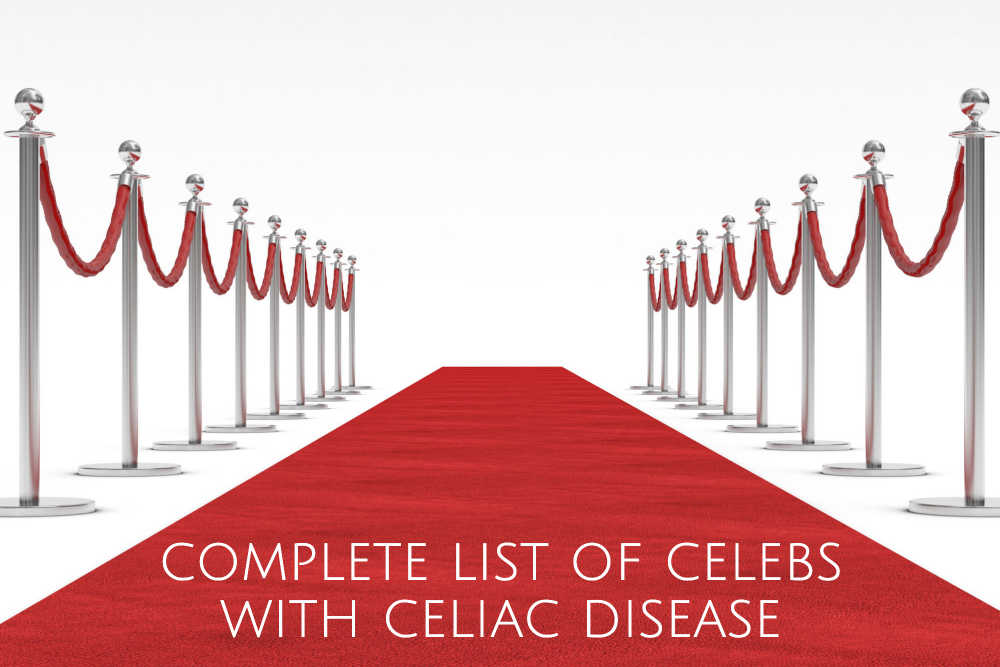 Regardless of why someone eats gluten free – celiac disease, gluten sensitivity, wheat allergy or other reason – these celebrities share the gluten-free diet.

I think we can all agree that living with celiac disease or living a gluten-free lifestyle due to a sensitivity or intolerance can be alienating. It’s sometimes nice to know you are not alone, right?

Here is a list of gluten-free celebrities who surely would invite you, and your special “diet”, to break gluten-free bread with them.

Gluten-Free Celebrities Who Have Celiac Disease

Annaleigh Ashford – Actress Annaleigh Ashford confirms she has celiac disease in this article in Women’s Health magazine, where she also poses nude. Ashford is best known for her role as Betty DiMello on Showtime’s Masters of Sex, and on Broadway as Lauren in Kinky Boots.

Jaden Smith – Jaden Smith is the son of Will Smith and Jada Pinkett Smith. According to his Wikipedia profile, Jaden has celiac disease and a lactose intolerance. He also suffered from a slew of health issue related to going vegan.

Harnaaz Sandhu – After being trolled about her weight gain, 2021 crowned Miss Universe from India, Harnaaz Sandhu, confirmed to press that she has celiac disease.

Jameela Jamil – The British actress/feminist and body-positive activist told her followers on Instagram that she has coeliac disease and has had it since she was a kid. Read more in Us Weekly.

Frances Haugen – Depending how you define “celebrity”, Ms. Haugen is known as the “Facebook whistleblower” and has celiac disease. You can read more about it in this article.

Casey Wilson’s son – Ms. Wilson told  People how her four-year-old son was finally diagnosed with celiac disease in this article.

Kristen Bell – Ms. Bell told Women’s Health Magazine that she has a “genetic marker for celiac.” She decided to go gluten-free, along with her husband, Dax Shepard, who also suffers from an autoimmune condition.

Sharon Stone – This A-list actress told the New York Times in March 2018 that she doesn’t eat gluten because she has celiac disease.

Mandy Moore – This Is Us actress and former pop singer revealed her celiac disease diagnosis in an Instagram post and documented her upper endoscopy on Instagram, as reported in People.com

Cedric Benson – This Cincinnati Bengals running back has celiac disease.

Drew Brees – Some sources say this New Orleans Saints QB has celiac disease, while other say gluten intolerant. Either way, he avoids gluten.

Jennifer Esposito – This actress wrote a book about celiac disease, and discussed her disease in an interview on The Daily Show with Jon Stewart

Elisabeth Hasselbeck – This former The View and Fox News anchor wrote a book, The G-Free Diet, about celiac disease, a how-to guide to being gluten-free.

Gary Johnson – This Libertarian presidential candidate in 2016 confirmed he has celiac disease.

Shannon Ford – She served as a spokesperson for celiac disease during her reign as Mrs. United States. Ford’s story is featured in the book, Dear Gluten, It’s Not Me, It’s You.

Dean McDermott – This reality TV star and husband of Tori Spelling says he only kinda has celiac (maybe that’s like being kinda pregnant?)

Patrick Staropoli – This professional stock car driver revealed he had celiac disease in this article. Staropoli’s story is featured in the book, Dear Gluten, It’s Not Me, It’s You.

Keith Olbermann – This news broadcaster said in a tweet that he only “has the mildest touch of celiac” – whatever that means.

Jon Stewart’s son – The comedian and talk show host says his son has celiac disease. Read about it here.

Lisa “Kennedy” Montgomery – This Fox News commentator and former MTV VJ talks about her gluten-free diet on Twitter and confirmed she has celiac disease in an interview.

Anna Vocino – This actress and Eat Happy cookbook author has celiac disease and has been gluten-free since 2002.

Nichole Thomas – Wife of Tulsa’s NBA star Etan Thomas, says she has celiac disease, and she wrote this book about her family’s path to wellness.

Ty Dellandrea – Dallas Stars first-round pick in June 2018 has celiac disease. Read this article to learn more about how finding out he had celiac disease, and thus changing his diet, vastly improved his athletic performance.

Simon Cowell (Food Sensitivities) – Cowell says he removed gluten – along with dairy, red meat and sugar – upon doctor’s orders. He regained his energy and lost 20 lbs too!

Denise Richards (Hashimoto’s) – Richards says she went gluten-free to help her with her enlarged thyroid, which was first noticed by fans, and was later diagnosed as Hashimoto’s.

Chelsea Clinton (Gluten Intolerant) – This former first daughter avoids gluten and her wedding was gluten-free too!

Miley Cyrus (Gluten Allergy?) – This singer says she is “allergic” to gluten, although you can’t technically be allergic to gluten (you can be allergic to wheat or be gluten sensitivity)

Zooey Deschanel – This New Girl actress says she is gluten intolerant, and avoids soy and animal products too.

Novak Djokovic (Gluten Intolerant) – This tennis star talks about how his diagnosis as gluten intolerant was a game changer.

Geri Halliwell (Wheat Intolerance) – This Spice Girl says no to anything with wheat in it.

Mariel Hemingway (Gluten Sensitive) – This actress says she doesn’t have celiac disease, but she’s gluten sensitive instead. Read her interview in Living Without magazine

Debra Messing – This actress suffers from multiple food allergies and intolerances – and she says that’s why she avoids gluten.

Jessica Simpson (Wheat allergy) – This actress/singer is allergic to wheat.

Billy Bob Thornton (Wheat Intolerance) – This actor has an intolerance to wheat and dairy.

Know of other gluten-free celebrities?

Leave a comment if you know of any other gluten-free celebrities. Thank you!

Note: I have done my best to provide accurate list of gluten-free celebrities based on various sources. I do not guarantee the accuracy of this list.