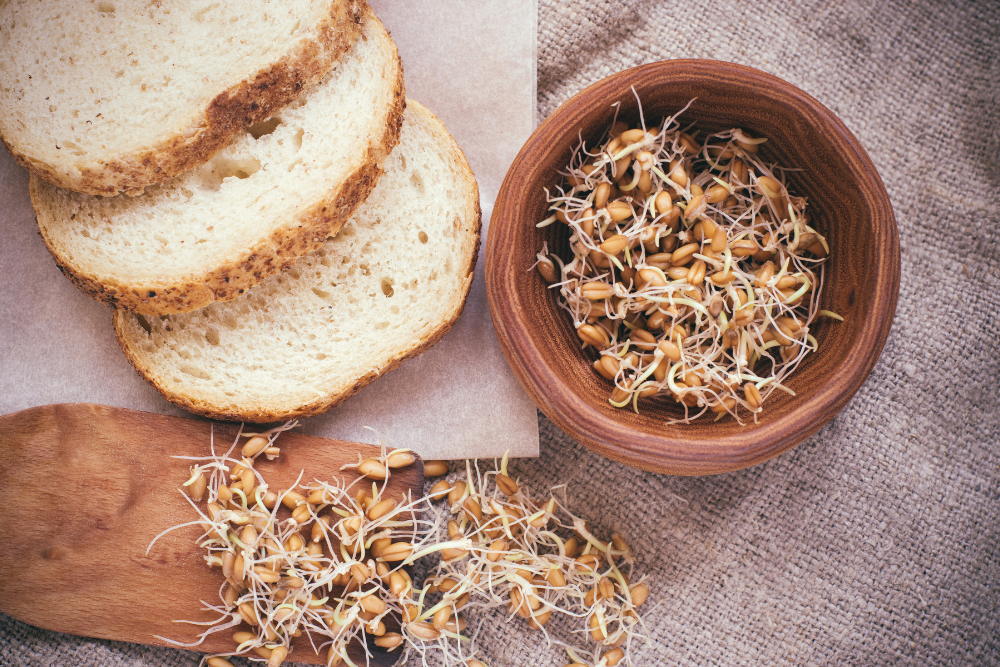 If you’ve ever wondered if sprouted wheat [or sprouted bread] is gluten free, you’re not alone. I’m asked often about sprouted breads, and today I want to set the record straight. This post may contain affiliate links. Please see my disclosures.

Gluten is a sticky protein found in wheat, rye, barley and sometimes oats. It’s the “glue” that holds baked goods together, and it gives bread that doughy and stretchy texture you love and crave.

People who cannot eat gluten – specifically people with celiac disease, non-celiac gluten sensitivities, wheat allergies and autoimmune disease – may be looking for ways to enjoy the taste and texture of gluten without damaging their bodies.

Plus Ezekiel 4:9 bread is marketed as a “healthy” and “flourless” alternative to bread, making this confusion worse. How can something be labeled “flourless” and still contain wheat? Is it gluten free or not?

The truth is, sprouted wheat contains gluten and is not safe for anyone on the gluten-free diet to consume. However, there is an explanation, so please continue to read to learn more.

I tested Food for Life gluten-free English muffins for hidden gluten with my Nima Sensor. I wasn’t satisfied with the result, so I sent a sample to an ELISA lab for further testing. These results were shocking and confusing. Keep reading to learn more.

What is Sprouted Wheat?

To make wheat flour (or flour from any cereal grain), a manufacturer will harvest the seeds from a mature wheat, barley or oat plant, for example. The seeds are harvested before they have germinated – or sprouted – into a full-fledged plant. Manufacturers then grind these seeds to make flour.

The Whole Grains Council says a grain is sprouted when the seed cracks open and a baby root sprouts from the grain. These sprouted grains are then ground up and used in baked goods.

Because the grains are sprouted, they cannot technically be turned into a flour. This enables manufacturers to label foods made with sprouted wheat and grains as “flourless.”

No, Ezekiel bread contains gluten, however, the “flourless” label throws off a lot of people.

As you can see in the picture below, Ezekiel 4:9 sprouted grain bread is labeled “flourless”, yet below you see it contains wheat, barley and spelt, all gluten-containing grains. This product is not gluten free despite being labeled “flourless.”

It bears repeating that, while many sprouted products are labeled “flourless”, any product that contains sprouted wheat, barley or rye still contains a significant amount of gluten and is not safe for people on a gluten-free diet.

How Much Gluten is in Sprouted Wheat?

One study showed that the sprouting process can decrease the amount of gluten in wheat by up to 47 percent. However, sprouted wheat still contains a significant amount of gluten.

Food for Life makes breads and English muffins made from sprouted gluten-free grains including brown rice, quinoa, millet and buckwheat.

But before you write off these products as unsafe, things are about to get really interesting.

I sent an email to Food For Life to share my test results and to see if they had any comment on why my Nima Sensor may have found gluten.

Within 24 hours of sending my inquiry, I received a phone call from Adolfo Suarez, a quality control supervisor at Food For Life. He looked up the specific lot number of the English muffins I tested, and told me that his testing didn’t find any gluten.

He further explained that Food For Life conducts a food allergen residue analysis report on all of its gluten-free products through the University of Nebraska Food Allergy Research and Resource Program (FARRP). He noted that although the FDA requirement for labeling a product gluten-free is less than 20 ppm, Food For Life would not release a product to market unless it tested below the limit of quantification. That means, if the lab finds any gluten, even below 20 ppm, the product would not be released to the market.

Why, then, did my Nima Sensor, and the Nima Sensor of one of my readers, find gluten? Could these be false positives? Does Nima struggle to accurately test sprouted ingredients? Or did these English muffins contain gluten after all?

I decided to send a sample of the English muffins to a certified ELISA lab for further testing. Curiosity was getting the best of me, and it was worth spending the money on further testing to get to the bottom of this.

As it turns out, Suarez is right. The ELISA Tek lab didn’t find any gluten in the gluten-free labeled Food For Life English muffins. Here’s a screenshot of the test results from the ELISA lab:

I emailed Nima earlier this week to find out if Nima struggles to test sprouted ingredients or any of the ingredients in these Food For Life English muffins. They told me they looking into this and that they would get back to me. We may have found another limitation to the Nima Sensor portable gluten-detecting device. Who knows?

Regardless, it’s important to know that Food For Life English muffins are safe to consume on the gluten-free diet.