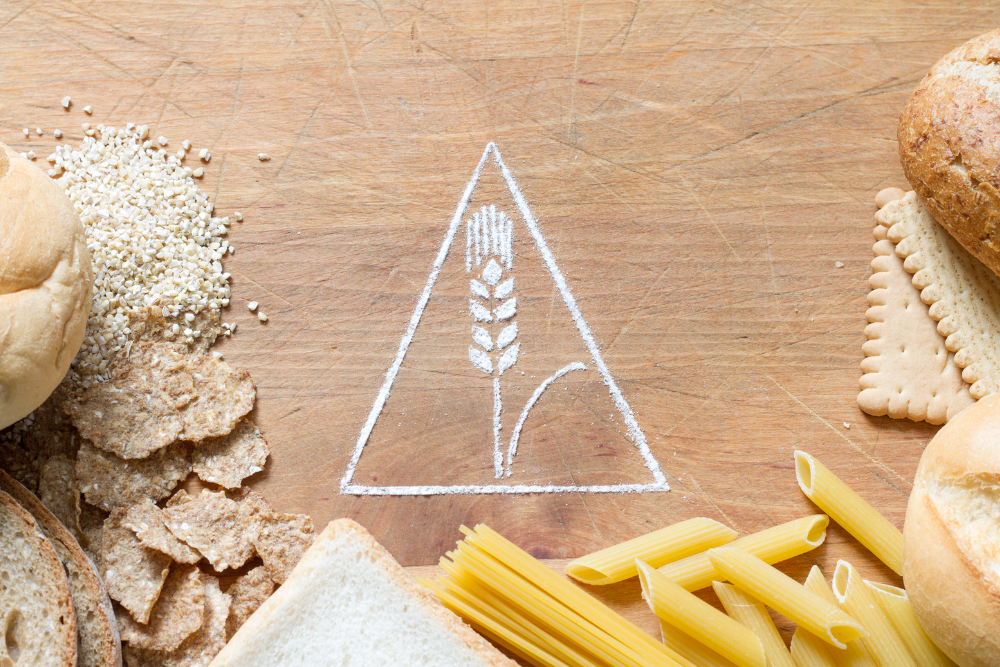 If you’ve been in the gluten-free community long enough, you’ve likely wondered if the FDA’s 20 ppm gluten threshold is enough and how much gluten a person with celiac disease can consume without getting sick. I discuss these questions and more in this article. This post may contain affiliate links. Please see my disclosures.

Celiac disease is an autoimmune disease in which the immune system becomes confused and mistakenly attacks the healthy tissue surrounding the small intestine every time a person eats gluten. Gluten is a protein found in wheat, rye, barley, and sometimes oats (due to cross-contamination). The only treatment for celiac disease is a strict, life-long gluten-free diet.

While many people in the gluten-free community would benefit from a zero-gluten diet, it’s unrealistic and gratuitous. As you’ll read below, a restrictively low gluten threshold beyond the current FDA’s gluten-free labeling guidelines would add unnecessary complications and potentially limit gluten-free options without improving the overall safety of a gluten-free diet.

In this article, I set out to understand why the Food and Drug Admistionation (FDA) in the U.S. set the gluten-free threshold at 20 parts per million (ppm) and how much gluten a person with celiac disease can safely eat. I also discuss the limitations of the gluten-free labeling guidelines and why more research is needed to understand how low levels of gluten affect a greater number of people with celiac disease and gluten intolerance.

Congress passed the Food Allergen Labeling and Consumer Protection Act (FALCPA) in 2004, and the law went into practice in 2006. FALCPA required food manufacturers to disclose on the label, in plain language, if a product contained any of the top eight allergens, which included milk, eggs, fish, shellfish, tree nuts, peanuts, wheat, and soybeans. These allergens account for 90 percent of food allergies in the U.S.

In 2013, the FDA updated FALCPA to include gluten-free labeling guidelines, which said a product could be labeled “gluten free,” “without gluten,” “free of gluten,” and “no gluten” when it contains less than 20 ppm of gluten and meets the following criteria:

Keep in mind “gluten-free” labeled foods may actually contain low levels of gluten. For example, a product that contains 16 ppm of gluten could be labeled “gluten free,” even with traceable levels of gluten. Further, the FDA doesn’t account for oats, which are notoriously contaminated with wheat.

The U.S. labeling guidelines align with the Codex Alimentarius guidelines set by the World Health Organization. Food manufacturers follow the Codex guidelines in the U.K. and European Union. Health Canada also requires products to contain less than 20 ppm to be labeled “gluten free.”

In contrast, Australia and New Zealand only allow products with no detectable levels of gluten to be labeled “gluten free.” The countries also provide guidelines for foods containing 20 mg of gluten per 100 grams of the food. These products can be labeled “low gluten.”

Why 20 Parts Per Million?

The FDA says it set the 20 ppm gluten threshold based on the following factors:

Dr. Alessio Fasano, Director of the University of Maryland Center for Celiac Research (the “Center”), played a crucial role in helping the FDA determine the final gluten-free labeling guidelines.

In his book, Gluten Freedom, he details how the FDA used the Center’s landmark study to set the 20 ppm gluten threshold, which is widely accepted by the gluten-free community and food manufacturers today.

He says the Center conducted double-blind studies that measured the intestinal changes in three groups of celiac patients, all of whom were in remission. (Remission is defined as good compliance with the gluten-free diet, no symptoms, and no increased serum autoantibodies.)

Dr. Fasano shares the following chart in his book to explain further how his team determined the 20 ppm gluten threshold.

Based on this chart, a person with celiac disease could eat a single product contaminated with 200 ppm of gluten and be safe if they only consumed 10 mg of gluten on the same day. They also found that a person could consume 300 grams of gluten-free products containing 20 ppm of gluten daily and remain safely below the 10 mg level. Ten milligrams is equal to approximately one-eighth of a teaspoon of flour.

The National Celiac Association offers a great visual of what 10 mg of gluten looks like. The organization says you would have to eat 17 slices of gluten-free bread that contain 20 ppm gluten in order to reach the 10 mg threshold, but you’d only need to eat a tiny crumb of wheat bread (the size of the tip of a pen) to reach that threshold.

To visualize what 20 ppm million looks like, think of a sandbox that contains one million pieces of sand. Only 20 pieces of the sand would contain gluten; the rest would be gluten-free.

In the following video, you can see what 20 ppm looks like. The creator extracted 20 pieces of sand from a sandbox containing one million pieces of sand.

Is the 20 ppm Gluten Threshold Enough?

A lot of people in the celiac disease and gluten-free community have questioned if the 20 ppm of gluten threshold is enough, given the following facts:

(1) The current assay measurement is sensitive to a threshold of 5 ppm vs. 20 ppm. This means gluten can be reliably detected in products at levels as low as 5 ppm.

(2) The gluten-free community sees organizations like the GFCO touting that its “certified gluten-free” products contain less than 10 ppm of gluten, lower than the 20 ppm threshold set forth by the FDA.

These are important facts that have caused the gluten-free community to question the 20 ppm gluten threshold and if it needs to be changed given the advancement of technology.

Dr. Fasano wrote in a 2011 letter titled, In Defense of 20 Parts Per Million, why the 20 ppm gluten threshold stands and should continue to stand.

(1) Just because we can measure gluten to the level of 5 ppm, which is a minuscule amount of gluten, it doesn’t mean it’s an effective way to set the threshold, says Dr. Fasano.

Instead, he says, he and his team used scientific methods (remember those double-blind studies and randomized trials?) to establish a safety level for ppms of gluten. The three-month trial showed that adult celiac patients could safely consume 10 mg of gluten each day without experiencing intestinal damage. Ten milligrams translated into ppms is equivalent to the daily ingestion of more than a pound of gluten-free products containing 20 ppm of gluten.

Dr. Fasano adds, “As far as I know, there are no evidence-based published studies that demonstrate toxicity with exposure to 20 ppm and safety with 5 ppm exposure.”

It’s important to note two flaws of the landmark study that set the 20 ppm gluten threshold. One, the study subjects were only adult celiac disease patients in remission, which meant they were healthy patients with no symptoms or lingering mucosal damage. Numerous studies reveal that few adults achieve complete mucosal healing. The researchers say nothing about how 10 mg of daily gluten would impact someone struggling to heal the lining of their gut nor how the 20 ppm threshold would impact children.

Furthermore, the study only examined how celiac disease patients reacted to varying levels of daily gluten exposure. People with celiac disease comprise one percent of the population, while 6-7 percent have non-celiac gluten sensitivity (NCGS) or gluten intolerance. People with NCGS don’t experience intestinal damage consistent with celiac disease. Still, they experience chronic gut inflammation (leaky gut), which can lead to serious disorders such as autoimmune disease, heart disease, and cancer.

The NCGS community currently follows the 20 ppm gluten threshold, but no studies exist to help the community understand if the threshold is safe for them.

(2) According to Dr. Fasano, setting the gluten-free labeling threshold below 20 ppm would likely drastically reduce gluten-free options in the U.S., given factors such as assay variability (margin of testing error).

He adds that thresholds as low as 5 ppm don’t give manufacturers enough flexibility to produce “good-tasting and safe products” and are unnecessarily restrictive. It might lead food manufacturers to no longer create gluten-free products or lower the quality of the products already offered.

(3) Overly-restrictive ppms would force manufacturers to “abide by an unnecessarily restrictive safety threshold” set in the U.S., which may prohibit U.S. companies from competing in the gluten-free global marketplace.

Creating such restrictions, he argues, could complicate and even worsen a celiac patient’s quality of life, which is the opposite outcome of the law’s intent.

While I agree with Dr. Fasano’s argument, it’s important to note that the gluten-free market was valued at $5.9 billion in 2021 and is expected to rise by nearly 10 percent by 2030. The market comprises mostly junk-food brands labeling their foods as “gluten free” and charging three times as much for the same product.

Most of the gluten-free community (including me) enjoy gluten-free Oreo cookies and Kraft Mac and Cheese options, so Dr. Fasano is right that we don’t want to rock the boat, so to speak. However, putting food manufacturers’ profits over consumers’ health would not be a valid reason for setting the threshold at 20 ppm.

The FDA’s gluten-free labeling guidelines are enough for most people with celiac disease. Most people consume well below 10 mg of gluten even if they eat multiple products containing less than 20 ppm of gluten each day.

However, how people respond and react to food is bio-individual. Suppose your symptoms persist or your small intestine hasn’t fully healed. You may want to abide by the zero-gluten rule by avoiding packaged foods and never eating out. Did you know that one in three restaurant meals labeled “gluten free” contained detectable levels of gluten, according to this study?

Zero-gluten is unrealistic and overly restrictive for most people. It would significantly interfere with your ability to travel, participate in social events outside the home, eat various foods, and overall enjoy life.

Want to learn the ins and outs of living with celiac disease? Read Dear Gluten, It’s Not Me, It’s You and enroll in my Gluten-Free Made Easy 30-Day course that I teach with Dr. Tom O’Bryan, the leading gluten-sensitivity doctor in the world and best-selling author of The Autoimmune Fix.

Learn how to eat out safely in my ebook, The Ultimate Guide to Eating Out Gluten Free.