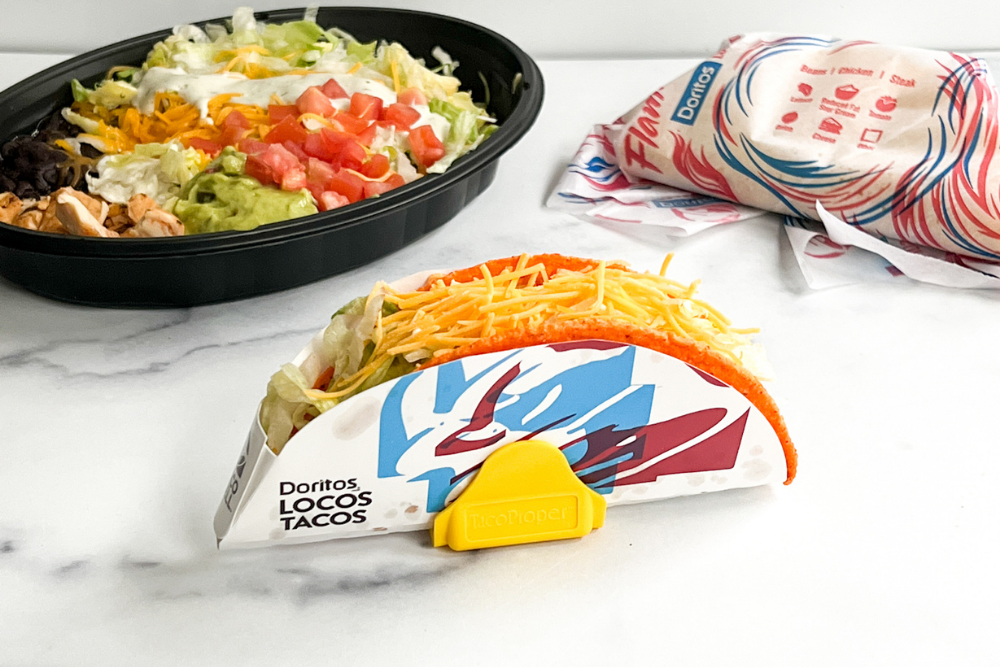 In this post, I’ll discuss what’s gluten free at Taco Bell (hint, don’t get your hopes up). This post contains affiliate links. Please see my disclosures.

Have you ever wondered if you could eat gluten free at Taco Bell?

I know I have, and many people have asked me to test Taco Bell for hidden gluten with my Nima Sensor over the years. (More on Nima Sensor in a bit.)

I haven’t had Taco Bell since I was diagnosed with celiac disease ten years ago, but a few readers have told me they have successfully eaten at Taco Bell, so I decided it was worth looking into, in the name of research, of course.

At first glance, the Taco Bell website says several of its menu items are “made without gluten.” Gluten is a protein found in wheat, rye, barley, and sometimes oats (oats don’t “technically” contain gluten, but they’re highly cross-contaminated with wheat – more on this in a bit). While the items do not contain gluten ingredients, Taco Bell says they’re not considered “gluten free.”

After further investigation, oats appear to be used in multiple “made without gluten” menu items, including taco shells and seasoned beef. You can independently verify this information by checking the ingredient list on the Taco Bell website.

If you’re a seasoned gluten-free eater, you know that oats typically contain gluten due to cross-contamination with wheat throughout the harvesting and manufacturing processes. Unless oats are labeled “gluten free,” they will have detectable amounts of gluten above 20 parts per million (ppm). You can read more about why oats aren’t considered “gluten free” in this article.

Ignoring the fact that many of these items contain oats and other questionable ingredients, Taco Bell says its customers avoiding gluten could order any of the following items:

Please note that Taco Bell also lists that its hash browns are free from gluten ingredients. However, upon further investigation, the hashbrowns are cooked in the same fryer used to cook the Cinnabon Delights, which contain gluten. This means the hashbrowns are cross-contaminated with gluten bits and unsafe for those on a gluten-free diet.

I also double-checked Taco Bell’s Allergen Guide to see which menu items are free from gluten in addition to the items listed above. Ingredients that “do not contain gluten,” according to Taco Bell, include:

Of course, like every restaurant, Taco Bell includes this disclaimer at the bottom of its allergy page:

“Taco Bell does not claim “gluten free” for any of its food. Some Taco Bell items are made without gluten containing ingredients but are prepared in common kitchen areas, including common fryer oil, risking gluten exposure. Taco Bell does not recommend products for customers with celiac disease. Customers with gluten sensitivities should exercise judgment when ordering.”

In other words, Taco Bell wants to make money from the gluten-free community by offering items “made without gluten,” but it’s not willing to create menu items that are safe for those who need to eat gluten free.

On top of that, it’s commonly known that oats are deeply cross-contaminated with gluten, which means the crunchy tacos and seasoned beef should not be listed on a dedicated page titled “How To Eat Taco Bell When You’re Avoiding Gluten.” It’s misleading.

Even though I didn’t feel comfortable or confident eating at Taco Bell, I still decided to order a few items to test them with my Nima Sensor. Maybe I had the restaurant all wrong. Then again, maybe not.

The Nima Sensor is a portable gluten-detecting device that enables gluten-free diners to test their food for hidden gluten before they eat it. Nima offers unprecedented food transparency and is a welcome addition to any gluten-free person’s safe-eating toolkit.

Unfortunately, like most things, some people in the celiac community don’t like this technology because it’s super sensitive, which they say can lead to false positives given that the FDA says food can be labeled “gluten free” even if it contains up to 19 ppm of gluten.

I like that Nima detects ANY gluten (even below 20 ppm). It’s a powerful tool for keeping me safe.

That said, the device has many limitations and is expensive. Read What You Need to Know About Nima Sensor Before You Buy before investing in this gadget.

I ordered the three menu items Taco Bell says are made without gluten. Please note I discussed my food “allergy” briefly with the server, but she told me she wasn’t aware of any special protocols for handling gluten-free or allergy orders. However, she suggested that the crunchy tacos and Power Bowls would be good choices for me.

Here’s how the “menu items made without gluten” fared when put to the Nima Sensor test:

Nima Sensor reports a “Gluten Found” message. This is likely the safest option if you had to order something at Taco Bell; however, due to the high likelihood of cross-contamination during the preparation process, it’s not a safe option for those serious about eating gluten free.

As you can see, Taco Bell is three for three with “Gluten Found” messages. This restaurant is unsafe for anyone who needs to avoid gluten for medical reasons. Period.

After evaluating the pink lines on the back of the Nima Sensor test capsules, I want to add that both tacos had an obvious and distinct third pink line, indicating a higher level of gluten.

However, the Power Bowl only had a faint pink line, which may mean it contained only trace amounts of gluten, likely from heavy cross-contamination and potentially below the 20 ppm FDA threshold.

For reference, the image below shows the back of Nima Sensor test capsules. The first test capsule is unused (see the green seal at the top). There are no pink lines.

The second capsule shows two pink lines, which means Nima didn’t find any gluten as the first pink line is the control line that shows you it worked. The second pink line means “no gluten found.”

When you see a third pink line, it means Nima found gluten. Sometimes the line is faint, which means low gluten, and sometimes it’s a solid pink line, which likely means the product is loaded with gluten.

The Nima Sensor reads the lines and reports the results as a smiley face (no gluten found) or wheat symbol (gluten found).

Bottom Line: Is It Safe to Eat at Taco Bell?

As you can see, even though Taco Bell says several of its menu items are made without gluten, it’s not safe to eat at this restaurant.

Two of the “made without gluten” menu items contain oats, which contain detectable levels of wheat. On top of that, each of the three menu items I tested with my Nima Sensor either contains gluten ingredients or is heavily cross-contaminated with other items containing gluten.

Bottom line: Taco Bell is NOT safe for anyone serious about following a gluten-free diet. Those with celiac disease and gluten sensitivity should heed this warning not to eat at Taco Bell.