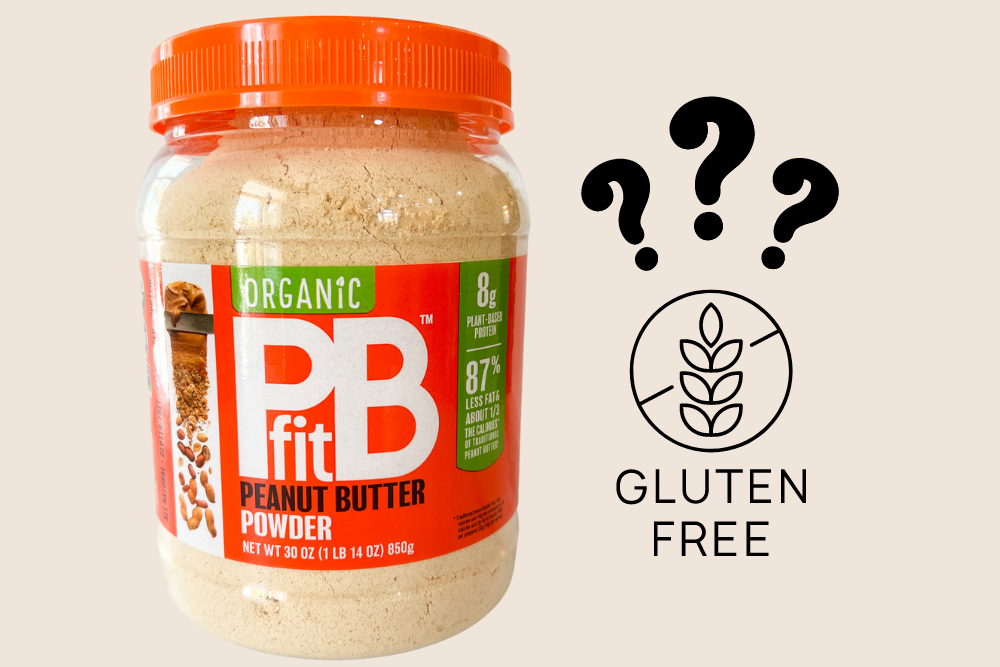 My efforts to independently test PBfit for hidden gluten left me with more questions than answers. But if you’re looking for the answer to the question, Is PBfit gluten free?” the answer isn’t black or white. My independent testing is saying it’s not, but the company’s independent testing says it is. This is my story, and I offer only factual information so you can make your best judgement about what foods are safe for you to eat. Please read my disclosures.

Last year, when walking the aisles of my local Costco, I noticed a product called PBfit. I love peanut butter, but also know it’s a high-caloric food. PBfit says it contains 87 percent less fat and one-third of the calories of traditional peanut butter. It also bears a NSF certified gluten-free label on it.

I bought a container and immediately used it to make no-bake chocolate and peanut butter cookies. Later that day, I experienced a dull stomach ache, which I chalked up to eating too many cookies. But then I had the thought, what if PBfit, a product I had never had before, actually contained hidden gluten?

I decided to test PBfit with my Nima Sensor, a portable gluten-detecting device that enables you to test a small sample of food for hidden gluten, to find out.

While Nima is a highly-accurate device, it does have limitations and, as I recently experienced when testing Food For Life Gluten-Free English Muffins, it also can give false positives. This means a product that is gluten free may, on the rare occasion, test positive for gluten with Nima. (Read What You Need to Know About Nima Sensor Before You Buy if you’re thinking of investing in a gluten-detecting device.)

I tested a sample of the PBfit with my Nima Sensor, and Nima came back with a “Gluten Found” message.

I used a second Nima test capsule to test another sample of PBfit, just to be sure, and Nima came back position again.

You can watch me test this exact product in this video:

I contacted PBfit to share what Nima found (twice), and the company assured me the product was gluten free.

In fact, a spokesperson for the company wrote me and said, “Our PBfit Organic is certified gluten free; we are required to test every lot and ensure it’s below 15 ppm [of gluten] before we send it out. We do this using test kits that have been approved by our certifying body.”

I was feeling unsettled about the Nima results, but I dropped it figuring it contained somewhere between 5-19 ppm of gluten, which would still be legal and no reason to sound the alarms.

I also know that Nima was often hyper-accurate, having the ability to detect gluten under 20 parts per million (ppm) of gluten, which is within the less than 20 ppm gluten required by the FDA for a product to be labeled “gluten free.” Maybe what I experienced was simply a Nima false positive.

Then I ran into a similar issue with another product, Food For Life Gluten-Free English Muffins. My Nima Sensor found gluten, but a spokesperson for the sprouted bread company insisted it was gluten free and even showed me the gluten-testing lab results, which also indicated an undetectable amount of gluten (anything under 5 ppm is undetectable by today’s lab testing standards).

I wanted to get to the bottom of this, so I sent the English muffins, along with a sample of PBfit (from the same container from last year, which I held onto), to the ELISA Technologies lab in Florida. I had to pay to test these large samples, but my curiosity got the best of me and I felt compelled to do it.

In the sample I sent ELISA Technologies, the lab technicians found it contained 43.7 ppm of gluten, well above the less than 20 ppm of gluten allowed by the FDA.

I reached out to PBfit again to share these test results, and they asked me for the lot number. They were able to produce the original test certification from their lab’s ISO-certified lab, which showed that the product contained less than 10 ppm of gluten using the Romer G12 test method.

Justin Bickford, the Scientific Director for ELISA Technologies, responded with this note, which I want to share verbatim to avoid any confusion:

“The Nima Sensor detects most gluten sources down to at least 20 ppm, while our EZ Gluten detects at least as low as 10 ppm, using different antibodies. The quantitative testing we performed uses the same antibodies as our rapid test, so you have two test results with very different antibodies indicating that gluten is present above 20 ppm and at 43.7 ppm, which is very convincing.

“There are a couple of reasons these corroborating results differ from the test using Romer’s kit with a G12 antibody. One of which is that the G12 antibody does not detect ancient wheats (e.g., emmer, einkorn, khorasan). The antibody used by Nima is less well characterized, so I’m not sure how it is affected by ancient wheats, but contamination of this kind may explain the results. Outside of ancient wheats, the variation between antibodies is fairly low, with up to a 2-3× difference seen in rye or barley gluten.

“The other possibility is sampling. This could be an issue of sample homogeneity where the samples tested were simply not comparable due to low levels of contamination late in production or packaging, or an issue of contamination after sampling or during sample handling.

“I am confident that the sample you tested and sent to us contains gluten above 20 ppm and likely around 40 ppm. If the results with the Romer kit indicated <20 ppm, I’d be more inclined to say this is an issue of differences between assays, but this seem more likely to be a problem with that assay or some difference in sampling that either missed the gluten in one case or resulted in contamination of a sample in the other.”

Answering the question, Is PBfit gluten free, is hard to do, as both Nima Sensor and ELISA Technologies lab found gluten in the sample provided. Specifically, ELISA Technologies found 43.7 ppm of gluten, well above the legal limit.

To me, it seems like one of two things could be at issue. One, the testing method used by PBfit is flawed and not accurate. Or two, PBfit is not sufficiently testing batches of its product. In other words, some batches might test below 20 ppm of gluten, while other batches are testing over 20 ppm. This means there could be an issue of raw ingredients from different supplies testing differently, contamination issues in its manufacturing facility, or another issue that I’m not privy to with my limited knowledge of manufacturing and gluten testing methods.

To elevate this further, I’ve asked the NSF, PBfit’s gluten-free certifying agency, to investigate this matter further, providing them with the results from Nima and ELISA Technologies. At the time I published this article (July 2022), it’s still under investigation. I will update this article as more information becomes available.

“Thank you for bringing your concerns regarding potential gluten in the organic PBfit peanut butter powder product to NSF’s attention. NSF has completed the investigation of GFS-7568 and did not validate the complaint. NSF verified the gluten levels of the product and lots in question through an impartial investigation that included independent and accredited testing. As a result, NSF has closed this complaint.”