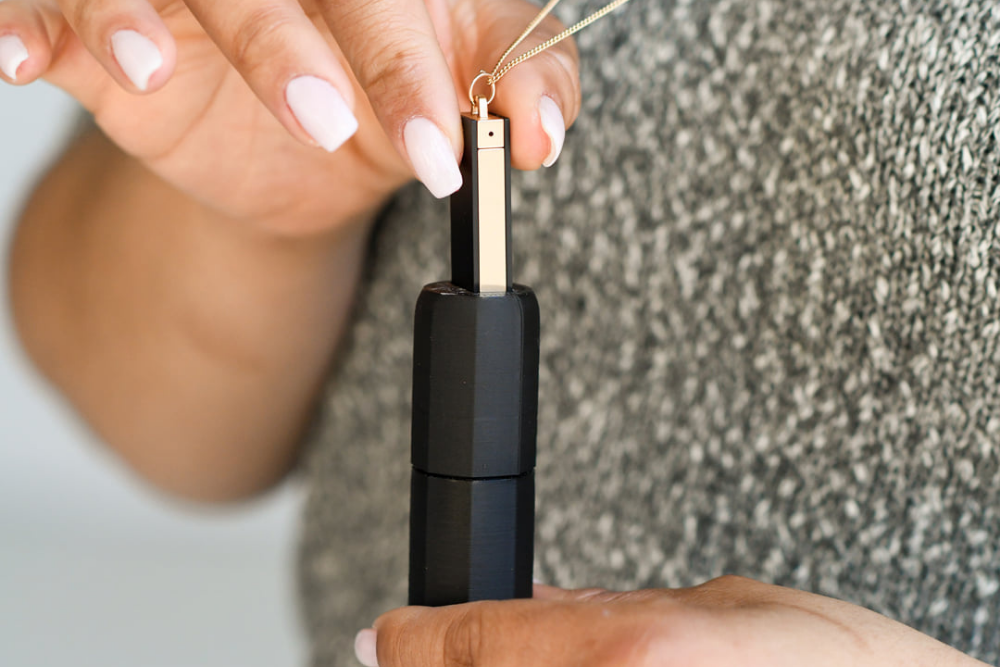 If you’re in the market for a gluten-detecting device, you’ll want to read this article about the Allergy Amulet. I compare the Allergy Amulet to the Nima Sensor to help you decide which device is the best fit for you. This post contains affiliate links. Please see my disclosures.

The gluten-detecting device wars rage on with the introduction of another new device, the Allergy Amulet. This device promises to help the 32 million people suffering from food allergies eat with less fear and anxiety.

The Allergy Amulet is set to officially launch in early 2022, but the company has already caused quite a ruckus after raising nearly $5 million dollars in capital. It has also kicked its marketing machine into high gear. (Update: The gluten sensor won’t launch until sometimes in 2023.)

Similar to Nima Sensor, the Allergy Amulet promises to empower its users to test their food for hidden allergens before taking a bite.

This enables millions of people to overcome food fear and eat out with more confidence.

The Allergy Amulet was co-founded by, Abigail Barnes. She has been dealing with life-threatening food allergies her whole life and has severe allergies to peanuts, tree nuts, and shellfish. She says one bite of any of these foods would send her “straight to the ER.” It’s easy to see that the Allergy Amulet is personal to Barnes.

In fact, the Allergy Amulet is meant to be worn as a fashionable necklace or wristband, or it can easily be carried around as a keychain. The wearable device comes in a variety of colors including gold, black, or platinum.

Additionally, the Allergy Amulet promises to test for all big eight allergens – eggs, milk, peanuts, tree nuts, wheat, soy, fish, and shellfish – as well as for sesame and gluten. Sesame will soon become one of the “big” allergens once the FASTER Act passes.

Nima Sensor tests only for gluten and peanuts, although other allergen-testing capsules were under development before the owners sold the company and it went through a difficult transition. (Note: The Nima Sensor is now sold by Nima Partners.)

Company officials say they’re first launching their peanut and soy test kits in early 2022, and they don’t have a specific launch date for their gluten test kit yet. This means if you’re looking to test your food for hidden gluten, Nima Sensor is your only option.

Please note that there is a third device, known as the ALLIS Sensor. However, ALLIS never launched as promised. I purchased an ALLIS Sensor during its pre-sale in 2021, and I never received the Sensor or a refund. Linda Sun, the owner of ALLIS, took off with all the pre-sale money and has not responded to any communications from me.

The Allergy Amulet also says it will be the “fastest” allergy-detecting device on the market, promising to flag the presence of the stated allergen in about 60 to 90 seconds. Nima Sensor takes about 1-3 minutes.

Like the Nima Sensor, the Allergy Amulet was peer-reviewed in a published report that found the device to demonstrate a rapid response, minimal cross-interference, and high accuracy. Nima, too, purports high accuracy for detecting any gluten, even below the 20 ppm FDA threshold.

The now-defunct ALLIS Sensor once promised to reveal exactly how many parts per million (ppm) are in the tested product, making it one of the more technologically attractive options to the gluten-free community.

Also, like the Nima Sensor, the Allergy Amulet can only test a small portion of your food, not the entire dish. This is why all gluten-detecting devices should not be used without first taking proper precautions, such as speaking with your waiter about your allergies.

How Much Will the Allergy Amulet Cost?

The Allergy Amulet Starter Kit (inclusive of the device and test strips) was listed at $289 in a newsletter I received earlier this year, but the company says the pricing will vary depending on if you get the basic model or one of the company’s wearable lines. The premium jewelry line of devices will cost between $150 and $300.

Which Testing Device is Better?

It’s hard to say which device will be best suited for the gluten-free community until all of the devices are available.

Rest assured, as soon as I get my hands on the Allergy Amulet, I’ll be able to assess how it works in comparison to the Nima Sensor. For now, the gluten-free community will have to wait-and-see how the gluten-detecting device wars pan out.