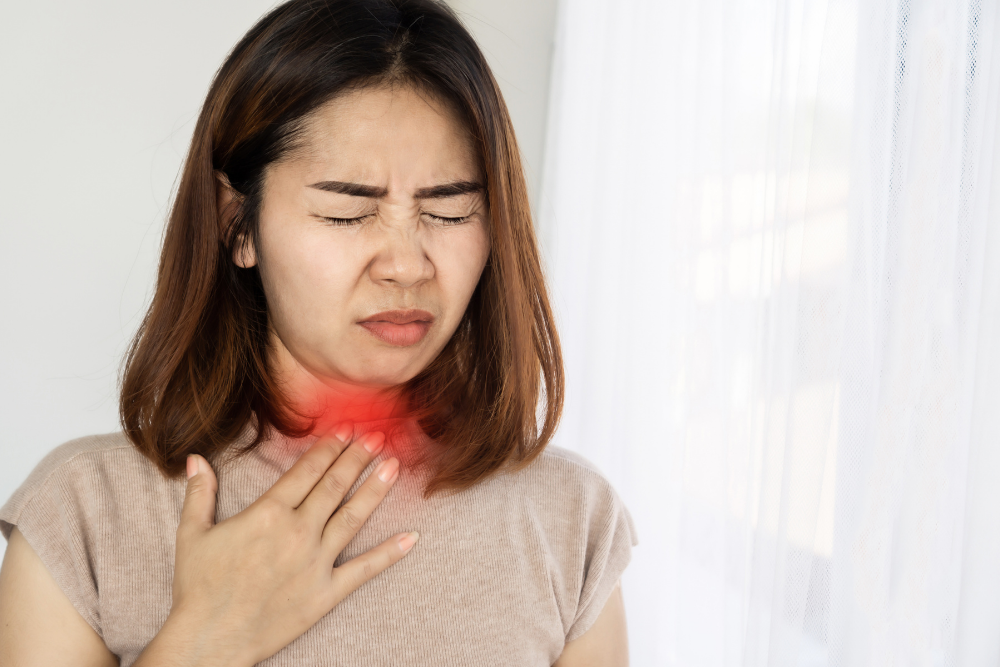 This post will help you understand if gluten is behind your acid reflux or GERD symptoms and the connection between celiac disease and acid reflux. Please see my disclosures.

If you’ve ever experienced a burning sensation in the lower chest area, then chances are you’ve experienced acid reflux.

Acid reflux is commonly referred to as heartburn and includes symptoms such as pain in the chest, difficulty swallowing, and regurgitation of bitter-tasting food, which is basically food mixed with your stomach acid. Some 20 percent of the US population has GERD.

Acid reflux is caused when your stomach acid bubbles up so much that it backflows into the esophagus, which connects the mouth to the stomach.

Those who experience acid reflux on a regular basis are typically diagnosed with Gastroesophageal Reflux Disease or GERD.

If GERD is not addressed and mitigated, it can lead to a variety of complications, including the narrowing of the esophagus pathway due to scar tissue buildup, which in turn can lead to trouble swallowing. It can also lead to esophageal ulcers or sores as well as an increased risk of esophageal cancer.

Your stomach produces hydrochloric acid that further breaks down your food into small bits so it can more easily enter into and become absorbed by the small intestine. This powerhouse organ sends nutrients from the food you eat to every organ and cell in your body.

However, when the stomach is having trouble breaking down large or hard-to-digest food particles, it can easily turn up the gas and bubble up as it works harder to digest the foods you’re eating.

Experts say GERD is not only aggravated by specific foods, but also it can become aggravated by overeating, eating too fast, not fully chewing your food, or eating before bedtime.

What is Gluten’s Role in Acid Reflux and GERD

Gluten, a sticky protein found in wheat, barley, rye, and sometimes oats, undeniably plays a role in digestion. However, there are conflicting data and some data produced by those with conflicts of interest. It can be hard to trust everything you read these days.

Those with celiac disease, a genetic autoimmune condition in which gluten causes the body’s immune system to mistakenly attack the healthy tissue surrounding the small intestine, have a known issue with gluten and avoid it like the plague.

Interestingly enough, 60 percent of untreated celiac disease patients (i.e. patients who do not know they have celiac disease and/or have not implemented a gluten-free diet) say they experience upper GI tract symptoms.

Another study found that just over 30 percent of adult celiac patients experienced mild to severe symptoms of GERD.

Additionally, researchers found that the gluten-free diet can effectively relieve acid reflux symptoms, such as reduced severity of both heartburn and regurgitation, in all adults.

On top of that, evidence suggests a strong association between celiac disease and eosinophilic esophagitis (EoE), a chronic inflammatory condition of the esophagus. EoE patients experience white blood cell buildup in the esophagus due to food allergies or acid reflux.

While the evidence is clear that people with celiac disease and EoE must stay away from gluten for a slew of reasons, there is also growing evidence to suggest that those who suffer from other digestive disorders, autoimmune diseases, or who have a known sensitivity to wheat/gluten, should strictly avoid gluten, too.

To support this, several studies highlight how the gluten-free diet can be an effective tool used in rapidly controlling esophageal symptoms (i.e., acid reflux, heartburn, and GERD) and preventing their recurrence. That said, there isn’t research that exists that supports the GERD-gluten link in those without celiac disease; albeit, lack of research doesn’t mean lack of connection.

Use Caution When Medicating GERD

Instead of telling you to change your diet, most doctors will prescribe a magic pill to help relieve the symptoms associated with acid reflux or GERD. It might start as over-the-counter antacids (Tums, Pepto Bismol, or Alka-Seltzer) and may eventually lead to prescription proton pump inhibitors like Prilosec and Nexium.

Many people find relief with these prescription drugs because they work by neutralizing the stomach acid. But be forewarned, such medications only treat the symptoms, not the root cause, and can worsen your digestion.

In fact, proton pump inhibitors block the production of stomach acid, which you need to help you digest the food you’re eating. Just because your stomach turns up the bubbles after you eat hard-to-digest foods doesn’t mean your body isn’t working right; instead, it means your body is working overtime.

There are several consequences to blocking the production of stomach acid.

First, undigested food particles are sent directly into the small intestine, where they wreak havoc on your gut.

The intestine can’t properly absorb these large particles, so they look for ways to escape the confines of your small intestine.

As a result, they tear through the intestinal wall, “leak” out of your gut, and enter your bloodstream, where they can cause inflammation and other diseases depending on the weak link in your genetic chain. This is known as intestinal permeability or leaky gut, and when this happens, a slew of new and unsavory symptoms and diseases emerge. (You can learn more about the mechanisms of autoimmune disease in The Autoimmune Fix by Dr. Tom O’Bryan.)

Second, food not being properly digested and absorbed can lead to nutritional deficiencies. In fact, stomach acid plays a leading role in the absorption of vitamins (particularly Vitamin B12), the digestion of proteins, and the initiation of peristalsis, which causes the food to properly move through the digestive tract, according to the American College of Gastroenterology.

In a WebMD article about hypochlorhydria, which is a condition marked by low levels of stomach acid, patients experience a slew of digestive and nutritional disorders, including limiting the body’s ability to digest and absorb proteins (hello, gluten is a protein!). It is also known to damage the gut and lead to digestive health issues and infections.

As you age, the stomach decreases its production of hydrochloric acid; however, long-term use of antacids and PPIs also contributes to this phenomenon and explains why so many people suffer from this disorder.

In other words, if you’re using medication to decrease or suppress the production of stomach acid, you’re likely also suppressing your body from accessing essential nutrients from the food you eat.

There is also a high risk of fractures associated with long-term use of PPIs. While PPIs are meant to only be used for short-term treatment of acid reflux, the truth is many PPI users have been on the drug for years to relieve their chronic heartburn symptoms.

Unfortunately, the FDA says that the long-term use of PPIs is associated with an increased risk for fractures of the hip, wrist, and spine.

In fact, if you Google “overuse of proton pump inhibitors,” you’ll find pages upon pages of literature suggesting that PPIs are being overused and overprescribed.

In this article, the writers say by continually altering the concentration of acid in the stomach, PPIs alter the absorption of many medications and essential vitamins. They are associated with an elevated risk of kidney disorders and disease, dementia, and bone fractures, among other issues.

While ultimately, you may relieve your heartburn symptoms through medication, you may be trading those symptoms for a slew of new symptoms that can be even more annoying and/or damaging.

This is why it’s wise to look to nutritional therapies – such as the gluten-free diet – to “treat” acid reflux and GERD, and only use medications, on occasion, as directed by your doctor and the FDA.

Yes, gluten consumption can lead to symptoms associated with acid reflux and GERD, and this is particularly well documented in cases of undiagnosed celiac disease.

Gluten is a difficult protein for humans to digest and leads to inflammation in all humans. If you’re looking to quell stomach acid production, consider changing your diet by eliminating not only gluten but also highly inflammatory foods such as fried foods, fatty meats, sugar, caffeine, spicy foods, alcohol, and more.

Also, be sure to eat smaller meals (no overeating), slow down, and chew your food to pre-digest as much of your food as possible, and do not eat near bedtime when gravity is not your friend.

For more information on implementing a gluten-free diet, please read my book, Dear Gluten, It’s Not Me, It’s You, and check out my beginner’s guide to gluten free too.