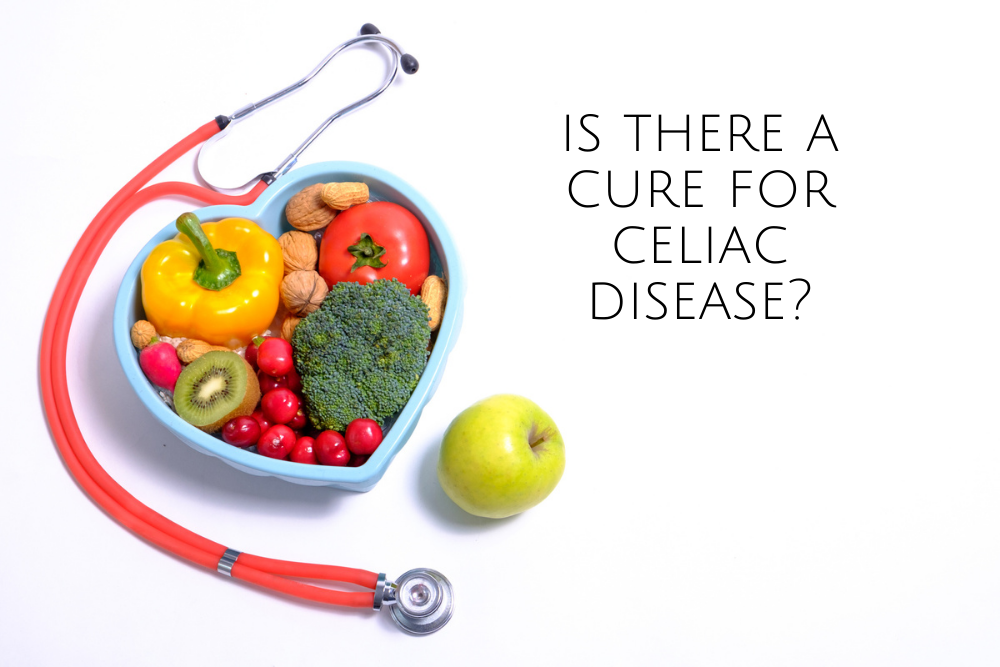 Celiac disease is a lifelong affliction affecting 1 in 100 people worldwide. Many people with the disorder wonder if there is a cure for the disease. I will explore this topic in detail in this article. This article contains affiliate links and information you should discuss with your healthcare provider. Please see my disclosures and disclaimers.

As crazy as it sounds, doctors once thought a banana-heavy diet cured celiac disease. True story!

Doctors would tell parents of children with celiac disease to bring their children to Dr. Sidney Haas in California to treat their children. Parents would leave their babies with Dr. Haas for six months, and he would “treat” them by feeding them a diet heavy in bananas, as well as milk, cottage cheese, meat and vegetables. What he didn’t feed them were starches.

At the time, parents were desperate to help their children given the devastating statistics. In that day, 30 percent of children died from celiac disease, Dr. Alessio Fasano told NPR.

The so-called “banana diet” worked so well on children that many of them made a full recovery and could return to their homes “cured” from celiac disease.

However, Dr. Haas’ honest but devastating error, did little to help the banana babies long term. Once children resumed their normal eating habits, their symptoms returned and they were never truly “cured.”

Of course, what Dr. Haas didn’t realize at the time was that it wasn’t what (bananas) he fed the children that “cured” them, it was what he didn’t feed them (gluten) that made their symptoms disappear.

There’s No Cure, But There Is an Effective Treatment

There is no cure for celiac disease, and the only treatment that has been proven effective is lifelong adherence to a strict gluten-free diet.

It’s important to note, however, that the gluten-free diet is not a cure for celiac disease; rather, it is an effective treatment option that puts celiac disease symptoms into remission in most patients.

No other treatment options exist, although there are some promising vaccines and medications that may one day exist to cure celiac disease or that may make living with celiac disease easier.

Why No Cure for Celiac Disease?

The Celiac Disease Foundation says in this article that the reasons there is no cure for celiac disease are complex. Here are a couple of the key reasons why there is no promise of a cure on the horizon:

(1) Celiac Disease Has Been Marginalized

First, celiac disease is often marginalized by the medical community as a rare childhood gastrointestinal disorder, something we now know is not true.

Celiac disease is diagnosed among people of all ages, and the largest number of newly diagnosed patients are over 40 years old. In fact, the Canadian Celiac Health Survey reports that the mean age of diagnosis is 46 years old.

On top of that, we know celiac disease manifests itself in more than just gas and bloating, and there may be up to 200 symptoms of celiac disease, with the 10 most common symptoms listed in this article.

As a result, the Celiac Disease Foundation says that over the last several decades, celiac disease researchers have been “denied the adequate resources needed to understand the basic biochemistry of the disease, much less cure it.”

The Celiac Disease Foundation also says there may not be a cure for celiac disease anytime soon because the disorder lacks funding.

Pharmaceutical companies may not be as keen in investing in celiac disease research since a “cure” (aka, the gluten-free diet) already exists. It may be difficult to convince stakeholders and investors to invest in something in which an effective treatment option exists, no matter how difficult the gluten-free diet is for patients to maintain.

While the private sector may not see celiac disease research as profitable, the public sector also might be negatively impacting potential research efforts put towards celiac disease.

A proof point came in Q4 of 2017 when a team of researchers questioned how the National Institutes of Health makes spending decisions for gastrointestinal research. Their findings were published in Gastroenterology and discussed in detail in Reuters.

The National Institutes of Health is an agency of the U.S. Department of Health and Human Services, and decides how federal (public money) is spent on health and medical research.

In the article, researchers found that celiac disease, which affects one percent of Americans, consistently received the lowest amount of research dollars (about $15.4 million over a period of five years).

On the other hand, researchers found that Crohn’s disease, which has the second lowest prevalence of all the GI conditions included in the analysis and afflicts about 0.25 percent of the American population, received the highest amount of funding ($77.5 million over the same five year period).

On top of that, another GI disorder known as Barrett’s esophagus, which, like celiac disease, impacts about 1 percent of the population, received $64 million in funding dollars over the same five year period. This is more than $48 million more than what is allocated to researching celiac disease despite the condition afflicting the same number of people.

I don’t share this information to make it seem like one disease is more important than the other, nor should funding decisions be based solely on the number of people afflicted as other factors, such as quality of life, and other readily-available treatment options, also should come into consideration. I only share this information to help you understand why there may be no cure for celiac disease now or on the horizon.

How To Naturally Manage Celiac Disease

Despite no cure on the horizon, there are a few ways you can manage your symptoms and put your celiac disease into remission.

While you cannot control your wonky genes, nor fully rid your body of celiac disease once your celiac disease genes turn on, you can control the disease and put it into remission so it does not affect you, nor is it detectable in your body.

The best way to manage symptoms associated with celiac disease is via a strict, gluten-free diet. The keyword being “strict.”  You cannot eat a low-gluten diet, or cheat on your diet every so often. It’s all or nothing. And it’s for life.

I’d like to add that while the gluten-free diet feels restrictive at first, it gets easier with time. It’s never easy, but it does get easier. The struggle is real.

There are also many resources, like these awesome Gluten-Free Meal Plans, that make living with a gluten disorder a little less lonely and difficult.

On top of eating a strict gluten-free diet, you can speed up the healing of your damaged small intestine by feeding it right and nurturing it along the way.

Of course, gluten has to go, but there is so much more you need to do to feel healthy and live your best life.

I wrote about how I cleaned up my diet – not just eliminated gluten – and how that helped me feel better faster and truly gave me a chance at good health. You might enjoy this article, How I Put Celiac Disease into Remission and Healed My Body, in which I detail some of the healing techniques I implemented that helped me feel better over the years.

The switch to the gluten-free diet is an opportunity to change your eating habits for good. The best way to do this is to eat real and whole foods. Fruits and vegetables are the best foods you can eat, so eat plenty of them.

A good way to incorporate healthy foods in your diet is to follow a celiac disease meal plan. It will help you avoid gluten and load up on fresh, whole foods that you prepare at home.

Doing so will help you boost your depleted nutrient tank and keep future diseases at bay.

Additionally, many people with celiac disease require supplementation to restore their nutrient tanks. Talk to your doctor about taking a few supplements to aid in your body’s restoration process.

You can read more about some of the supplements I take on a daily basis in this article, Supplements for Celiac Disease and Gluten Intolerance.

While there’s no sure or promise of a cure on the horizon, we must never lose hope.

I know first-hand that the gluten-free diet can be frustrating and difficult to follow at times. Please take solace in knowing that you control your own fate and that you’re not dependent on some (likely) overpriced drug to fix you.