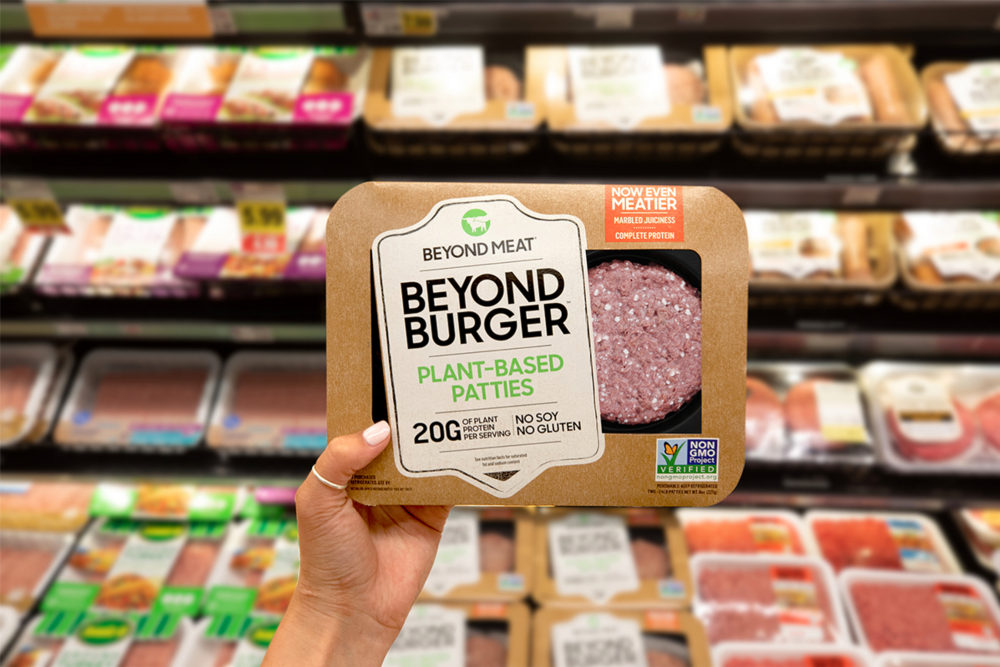 In this article, I discuss the rise of plant-based “meat” options and whether the popular Impossible Burgers and Beyond Meat products are gluten free. I updated this article in July 2022 to discuss these brands’ additions of Beyond Chicken and Impossible Chicken nuggets. This article may contain affiliate links. Please see my disclosures.

My diet is continually evolving as I figure out what my body needs to be healthy and feel its best.

And while there are many different “diets” around, what’s most important is finding a diet that is right for you.

I recently changed my diet to eat less meat. Mind you, it’s not a meatless diet, it’s a meat-less diet. I still eat meat, just less of it. I did this for two reasons.

(1) Sustainability: One thing that has become apparent to me is that the production of meat is not a sustainable process. The environmental impact of our worldwide palate for meat is grave. Animal agriculture is responsible for 14.5 percent of global greenhouse gas emissions, consumes 29 percent of our freshwater resources, and is the world’s largest user of land resources, representing 80 percent of all land used for agricultural purposes (both in growing feed and grazing surface area).

(2) Health: I wanted to see if cutting meat from my diet would net any health benefits. I got into the habit of eating more meat and less grains after my Whole30 stint last August. I noticed that once I limited my consumption of meat products, my dull stomach aches disappeared. It wasn’t grains or excess veggies that left me feeling stomach pangs; rather it was the hard-to-digest meat that had my tummy constantly churning.

Demand for plant-based products is growing, and analysts anticipate the market to only continue to soar. In fact, according to Forbes, 17 percent of U.S. consumers eat a mostly plant-based diet; 60 percent say they are reducing their meat intake. This made me realize that I’m not alone – and perhaps even late – to the plant-based, meat-less game.

Unfortunately, as I’ve ventured into this meat-less diet myself, I’ve noticed a major gluten-free pitfall when it comes to plant-based proteins and that is the fact that gluten, a protein found in wheat, rye, barley and sometimes oats, is found in many alternative meat products because the fibers in wheat gluten are similar to the fibers in meat products.

That said, while many plant-based meat alternatives today use wheat gluten, there are some that use soy protein and pea protein (both gluten free) to give their products the desired texture. This is where it’s essential that anyone with celiac disease or gluten sensivitity read labels carefully, because, as you’ll see, some products by the same brand contain wheat gluten, others are certified gluten free.

In this article, I’ll share what’s gluten free — and what’s not gluten free — in the plant-based “meat” work to help you on your journey to eat less meat.

Yes, Impossible Burgers are gluten free; however, Impossible Chicken Nuggets are not. More on that next.

I also found Impossible Burger patties at Trader Joe’s in July 2021. They are officially certified gluten free by the GFCO too.

Is Beyond Meat Gluten Free?

I bought Beyond Meat burger patties at King Soopers (Kroger) a few weeks ago and grilled them on my grill. While I didn’t find the burger to taste exactly like a meaty burger, it came pretty darn close.

Beyond Meat burgers are gluten free and are made with gluten-free pea protein and beet juice extract, among other ingredients. The beet juice extract allows the product to “bleed” so it looks like a real burger.

Please note, however, that Beyond Chicken products are NOT gluten free. More on that to come.

Beyond Meat, like Impossible Burger, also delivers on protein. A Beyond Meat patty contains 20 grams of plant protein, about the same amount of protein as a similarly-sized meat patty.

You can buy a variety of Beyond Meat products at the grocery store, including meatless “burger” patties, ground “meat,” plant-based sausages and brats, and frozen Beyond Beef Crumbles for making tacos, meat-less meat sauces, or to use as a pizza topping.

Beyond Meat products can be found at 35,000 grocery stores worldwide, including Kroger, Safeway and Walmart, and at restaurants such as TGI Fridays, Del Taco, Carl’s Jr. and Dunkin’. You can also find Beyond Meat products in other products, like these tasty Mikey’s pockets made with Beyond Beef Crumbles.

Are Beyond Chicken Nuggets Gluten Free?

Beyond Meat Beyond Chicken Nuggets are NOT gluten free despite the fact that Beyond Beef products are gluten free.

The company debuted its Beyond Chicken Nuggets in August 2021 in A&W Canada restaurants and has since expanded into grocery stores, KFC and Panda Express.

The Beyond Nuggets contain wheat flour in both the breading and breadcrumbs, and via the vital wheat gluten found inside the imitation “meat” part of the “chicken” nugget. Those with gluten sensitivity and celiac disease should avoid Beyond Nuggets like the plague!

Bottom Line: Beyond Chicken products are NOT gluten free.

While Impossible Burgers and Beyond Meat products are the darlings of the plant-based meat substitutes, there are plenty of other meat-less products that are also gluten free. They include:

Misc.: There are several ingredients that serve as a wonderful meat alternatives in addition to the brands mentioned. Consider foods such as tofu, tempeh (soy protein) and jackfruit in lieu meat of your next dish. Upton’s Naturals makes a delicious jackfruit treat, however, the company also make products containing seitan (which is basically wheat gluten) and those should be avoided. Read labels carefully.

Did you know that Lightlife plant-based products used to be gluten free, and then bam, all of sudden, they weren’t? In fact, they now contain wheat protein (aka, gluten!).

A friend of mine used to buy them. She had an old package in her freezer, and yes, it was gluten free. Then she bought a new package of them at the store and, you guessed it, they suddenly contained wheat.

Lightlife might be the only company in history to formulate its products to ADD gluten – sorry, but that is a dumb move if you ask me! Even Impossible Burger knew it was wise to reformulate to capture the gluten-free market.

I haven’t reviewed each and every Lightlife product, but you can check for yourself before you consider buying this brand. The most up-to-date information will always be on the packaging. Read those labels carefully as Lightlife has showed us, they can change on a whim and without notice.

Other Plant-Based Brands to Avoid

Finally, always remember that just because something is made of a plant-based protein doesn’t mean it’s gluten free.

The following brands should be avoided as they typically contain wheat protein (gluten):

Nothing beats eating naturally gluten-free foods (kale, carrots and eggplant) straight from Mother Earth. You could always make yourself a portobello mushroom burger. The taste and texture aren’t quite as spot on, but the health benefits are definitely something to write home about.