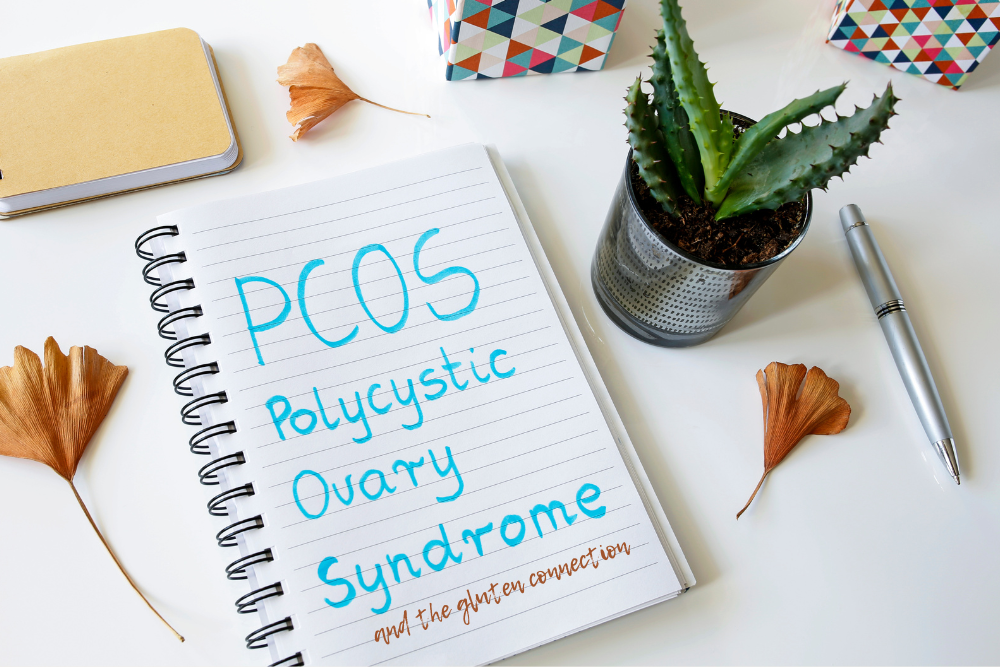 September is polycystic ovary syndrome (PCOS) month, making September a great time to shine a light on this disorder that affects 1 in 10 women and discuss the connection between gluten and PCOS. This post may contain affiliate links. Please see my disclosures.

A lot of women suffering from PCOS swear by a gluten-free diet. On top of that, a lot of holistic doctors and nutrition experts say the gluten-free diet can lessen or even reverse many of the painful symptoms associated with PCOS.

In this article, I set out to determine if there’s a connection between gluten and PCOS and wanted to understand if there is any science behind this association.

I also want to give anyone dealing with PCOS all the available information to help them make an educated decision about whether or not the gluten-free diet can help them overcome their PCOS-related challenges.

Before I discuss the connection between gluten and PCOS, I first want to define PCOS and uncover why it affects so many young women.

PCOS or polycystic ovary syndrome is a disorder that affects a woman’s hormones and is the sign of a hormonal imbalance. A woman may regularly miss her periods or stop getting periods altogether, all of which affect a woman’s ability to get pregnant and can cause extreme emotional stress.

Other symptoms of PCOS include hair loss, acne, mood changes, pelvic pain, and weight gain. Some women with PCOS also experience small cysts (fluid-filled sacs) on their ovaries, although many women with PCOS never get a cyst.

The cause of PCOS isn’t fully known, but experts say it could be related to:

When left unmanaged, complications from PCOS include:

Is PCOS an Autoimmune Disease?

PCOS is not an autoimmune disorder, but research suggests that different autoantibodies have been documented in PCOS, which may lead one day to PCOS being classified as autoimmune.

The Connection Between Gluten and PCOS

While there is no study that shows a direct correlation between gluten and PCOS, many people have told me that they experience vast improvements in their condition as a result of implementing a gluten-free diet. The gluten-free diet is free from gluten, a protein found in wheat, barley, rye, and sometimes oats.

It’s important to understand that just because there isn’t a study discussing the connection between gluten and PCOS doesn’t mean there isn’t a connection. It just means it hasn’t been studied… yet!

On top of that, chat boards are filled with women who have gone gluten-free and experience improvements in their PCOS symptoms.

One member of the Good For You Gluten Free community (we’ll call her “Anne”) emailed me and said she was diagnosed with PCOS as a teenager after asking her doctor why her period never resumed a year after discontinuing the depo birth control shot (Depo-Provera is a birth control injection administered every three months).

She shared her story with me, and with her permission, I’m sharing it with you.

Anne says in the past 20 years, the only way she could get her period to resume was to restart hormonal birth control. (Does anyone see the irony in having Anne restart birth control, which Anne says she believes was likely the trigger for her PCOS?) Unfortunately, birth control made her extremely tired all the time.

About three years ago, she was also diagnosed with Hashimoto’s thyroiditis and her doctor recommended she try a gluten-free diet to help her manage her symptoms.

After implementing a gluten-free diet, Anne said she was no longer tired “all the time” and, to her amazement, she said her periods resumed every other month, which were not quite regular, but more regular than she had experienced in years.

Anne says she believes the depo birth control shot “caused” her PCOS, but since implementing a gluten-free diet, she also admits that undiagnosed gluten intolerance may have been behind everything all along as well.

Anne’s story is not unlike many of the stories floating around in the PCOS community. Many of these women have already made the connection between gluten and PCSO long ago, but some are still trying to figure it all out.

Below I share five connections between gluten and PCOS. Please discuss these connections with your doctor and experiment with your diet to see if it helps lessen your symptoms or reverse your PCOS altogether.

In summary, Wheat Zoomer is a simple blood test that looks to see if your body produces antibodies to various wheat peptides, including gluten and non-gluten components of wheat. If your body is making antibodies to wheat, chances are you have gluten (wheat) sensitivity. (Non-celiac gluten sensitivity, or gluten intolerance, should be called non-celiac wheat sensitivity. It’s a bit of a misnomer.)

If someone has non-celiac gluten sensitivity, then they may experience vast improvements in their health and PCOS symptoms as a result of ditching wheat.

Most people with PCOS experience chronic low levels of inflammation, which can lead to various issues in the body. A doctor can check to see if a person’s bloodstream contains high levels of CRP (C-reactive protein). If it does, it means the individual is experiencing acute inflammation due to an infection, injury, or chronic disease.

Furthermore, gluten has been scientifically proven to cause an inflammatory response in all who eat it. Many people can tolerate low-level inflammation in the gut, especially if their gut health is good, but a large number of Americans have poor gut health, and 60-70 million Americans are affected by digestive diseases according to the NIH.

Plus, the Standard American Diet (“SAD” for short) means Americans are eating more and more gluten, and this increased gluten consumption is taxing the body more than ever. Gluten has been strongly linked to leaky gut and autoimmune disease.

It will likely take more than a gluten-free diet to reduce inflammation in the body, but it’s a start and can be the catalyst to cleaning up one’s diet. Stress, poor overall diet, poor sleep habits, and other lifestyle factors can contribute to high levels of inflammation in the gut and body.

Because PCOS is associated with obesity, the gluten-free diet can help kick-start weight loss, which may improve PCOS symptoms.

In fact, WebMD says that a woman can normalize her menstrual cycle by shedding 10 percent of her body weight. Mind you, the gluten-free diet isn’t a weight loss diet; rather it’s a medically-necessary diet for millions of people with celiac disease and non-celiac gluten sensitivity.

However, a lot of people lose weight when implementing a gluten-free diet. Why? They lose several pounds of inflammation weight. Remember, swelling and water retention are two signs of inflammation and contribute to weight gain. Others can lose weight if they stick to a mostly naturally gluten-free diet, avoid processed and packaged foods, and prepare healthy foods at home vs. eating out.

When implementing a gluten-free diet, be sure to read my article, 5 Dangers Associated with the Gluten-Free Diet, to ensure gluten-free success.

Ditching gluten has been linked to improved gut health. Dr. Alessio Fasano, a leading celiac disease researcher, told NPR, “No human being completely digests gluten. And in a small percentage of us, that undigested gluten triggers the release of [high levels of] zonulin.”

He says zonulin helps to regulate the gut’s leakiness by opening and closing the spaces or “junctions” between the cells found in the digestive tract lining. Many illnesses can be traced back to a loss of barrier function, or low zonulin levels, in the gut.

Dr. Fasano also says increased zonulin is associated with altered gut permeability, which can lead to the development of PCOS.

The gluten-free diet, among other positive lifestyle changes, can contribute to the (re)balancing of hormones, which is essential for women trying to regulate their menstrual cycle and get pregnant.

Dr. Jolene Brighten says in her book, Beyond the Pill, that blood sugar balance is the “crux” of everything hormonal, and this can be particularly affected by high levels of testosterone. Blood sugar dysregulation, she says, can cause the ovaries to kick out more testosterone and lead to PCOS symptoms.

Of note, Dr. Brighten says a lot of women experience a surge in testosterone when they go off the birth control pill, which most women do before they try to get pregnant. She says the pill suppresses testosterone, but when someone goes off the pill, they suddenly find themselves with too much testosterone.

This phenomenon is known as post-pill PCOS, although it may not really be PCOS. These women experience spikes in their testosterone, which leads to acne and hair loss, and forces many women to go back on the pill to manage – or dare I say, mask – their symptoms. It also leads to the misdiagnosis of PCOS.

Dr. Brighten says that a lot of doctors put their patients on birth control to manage PCOS-related symptoms such as irregular periods, acne, weight gain, and excessive hair growth, yet, the pill only masks these symptoms and is of grand disservice to the woman because it doesn’t treat the root cause of the disorder and worse, it allows the disease to progress.

Should You Go Gluten Free?

Talk to a holistic nutrition or medical professional, and experiment with yourself. I always tell my clients that you are your best detective and that most of us intuitively know what’s best for us and our overall health. And when all else fails, trust your gut.