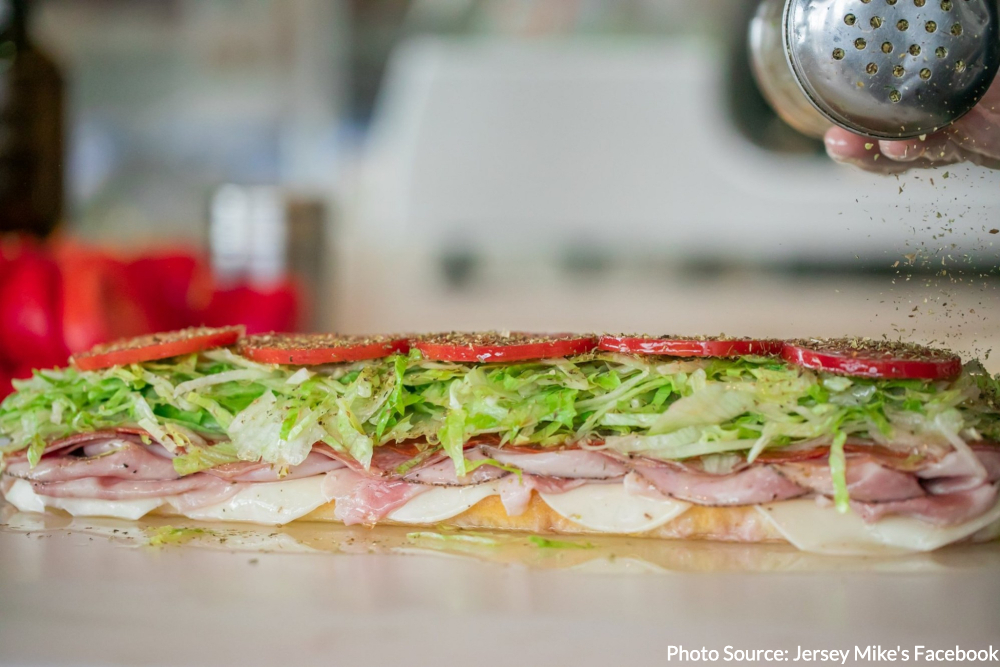 Jersey Mike’s does gluten free right, and in this post, I’ll share with you how you can safely eat at Jersey Mike’s even if you’re on a strict gluten-free diet. This post contains affiliate links. Please see my disclosures.

Jersey Mike’s gluten-free menu is plentiful and totally safe for those with celiac disease, an autoimmune disease treated by a strict gluten-free diet.

In fact, gluten-free customers can order just about any sub on Jersey Mike’s gluten-free menu without worry.

While Subway struggles to serve to the gluten-free community, Jersey Mike’s is doing it with flying colors.

In this article, I’ll discuss what’s gluten free – and not gluten free – on Jersey’s Mike’s menu, as well as reveal how Jersey Mike’s performed when I tested its gluten-free sub sandwich for hidden gluten with a portable gluten-detecting device known as the Nima Sensor.

Does Jersey Mike’s Have Gluten-Free Bread?

Yes, Jersey Mike’s has gluten-free bread that is safe for customers on medically-necessary gluten-free diets.

In December 2017, Jersey Mike’s announced it would be using pre-packaged gluten-free sub rolls by Udi’s at all of its 1,300 locations nationwide. The company says, “Udi’s gluten free sub rolls arrive at the restaurant individually wrapped and fully baked. The packaging is not opened until the sub is ordered and, as a result, there is little risk of cross contamination with other subs.”

Prior to its nationwide launch, Jersey Mike’s had begun testing the Udi’s gluten-free rolls in 111 Los Angeles and 19 West Palm Beach locations in December 2016.

The idea of offering gluten-free bread rolls came from a franchisee whose daughter had celiac disease. Given the severity of celiac disease and the difficulties of feeding someone a safe gluten-free meal without exposing them to even a crumb of gluten, a protein found in wheat, barley, rye and sometimes oats, is a challenge. The potential for gluten cross contamination in sandwich restaurants is a real threat to the health of someone with celiac disease.

That’s why Jersey Mike’s worked with the Gluten Intolerance Group to help train its team members on how to carefully prepare a sub sandwich for someone with celiac disease or a gluten intolerance.

Jersey Mike’s team members have been trained to change their gloves when handling the gluten-free bread rolls. They also know to use knives and other utensils that haven’t touched other bread products when slicing the gluten -free rolls, and they prepare each sub on parchment paper to avoid coming in contact with gluten crumbs.

With the addition of gluten-free bread, almost every hot and cold sub on the Jersey Mike’s menu can be made gluten free.

The only exceptions include the #15 Meatball and Cheese and the #18 Chicken Parm. Both of these subs contain gluten and should be avoided by those on a gluten-free diet.

Jersey Mike’s offers a database on its site where you plug your sandwich name into the database, and it’ll tell you the exact ingredients that sub contains. This enables you to assess your order for individual allergens.

I used my Nima Sensor, a portable gluten-detecting device, to find out if the food at Jersey Mike’s was really gluten free.

To test something for hidden gluten, you simply put a pea-sized amount of the food into a single-use test capsule, wait 1-2 minutes, and then Nima will reveal if gluten is present (or not).

I tested both the bread and the meat inside my sandwich (two separate tests). You can watch me test my food for hidden gluten in the following video.

In case you don’t have time to watch the full video, you can rest assured that my sandwich tested a-okay – no gluten found!

Read how other restaurants fared when put to the Nima Sensor test:

Eat out often? Download my Ultimate Guide to Eating Out Gluten Free or read my book, Dear Gluten, It’s Not Me, It’s You.

Thinking of eating at Subway instead? Think again after reading my article about the non-existent gluten-free protocols at Subway.