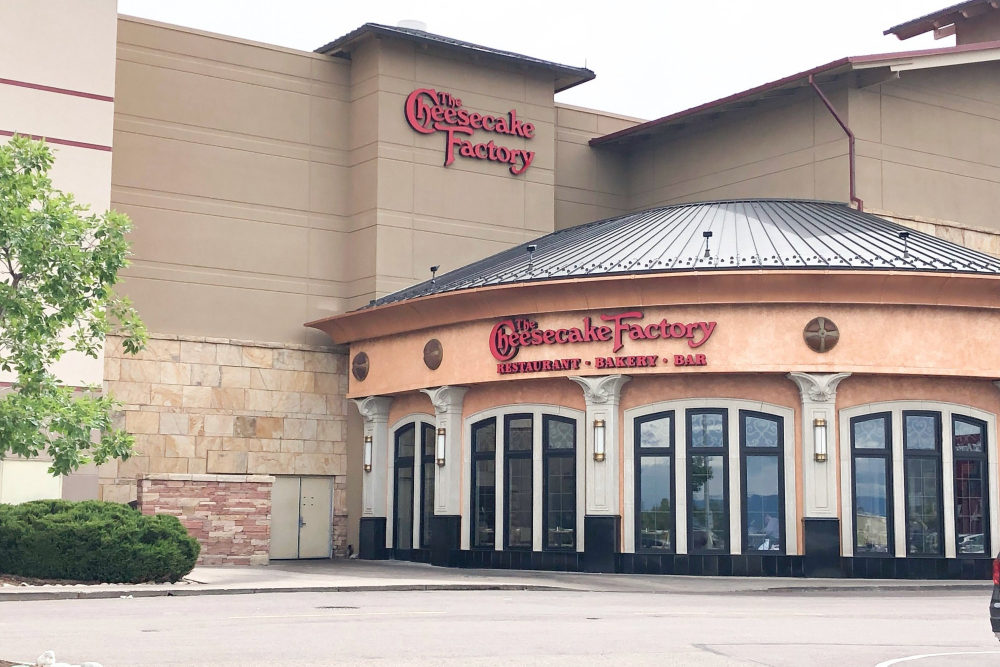 Curious about what’s gluten free at the Cheesecake Factory? I’ll give you the full scoop and let you know what happened when I put the restaurant to the Nima Sensor hidden gluten test (it’s not pretty). This post contains affiliate links. Please see my disclosures for details.

You might wonder what’s gluten free at the Cheesecake Factory, a restaurant that boasts the “world’s largest menu.”

The Cheesecake Factory has more than 250 dishes on its 12+ page menu, making it hard to decide what to order.

I did a little detective work to help you better understand how to eat gluten free at the Cheesecake Factory safely and why I will likely never go back myself.

Here’s what you’ll find in this article:

The Nima Sensor is a portable gluten-detecting device that allows you to test your food for gluten. You put a small piece of your food in the single-use test capsule, and in 1-2 minutes, Nima will tell you if it finds hidden gluten. It’s highly accurate for detecting even small amounts of gluten.

Before investing in a Nima Sensor, please check out The Allergy Amulet. Please also note that the Nima Sensor went out of business in 2020 but is now back under new ownership (as of September 2021).

Does Cheesecake Factory Have a Gluten-Free Menu?

The Cheesecake Factory doesn’t have a gluten-free menu; however, gluten-free items are labeled directly on the menu. The restaurant updates its menu twice yearly, so the menu items and allergen offerings can vary from restaurant to restaurant and season to season.

The restaurant says it offers gluten-free food but does not guarantee it will do it right. “We will do our best to accommodate special requests to prepare your meal just the way you like it. Please make us aware of any food allergies or other food sensitivities when placing your order, as not all ingredients are listed in the menu. Our restaurants are not allergen or gluten free environments. Menu items may be prepared using shared equipment and fryers allowing for cross-contact with allergens and other ingredients. For these reasons, even when specially ordered, we are unable to guarantee that a menu item will be free of any allergen.”

When examining the Cheesecake Factory menu (at Park Meadows Mall in Colorado), I noticed it had a “GF upon request” logo next to many of the items, indicating that these items could be made gluten free upon request. Remember, when you see “GF upon request,” you must request that the item be gluten-free.

Additionally, my server showed me a purple slip of paper he said he fills out when someone conveys that they are gluten free. It’s a checklist that the cook preparing my meal will run through. Here’s what it looks like:

With such a vast menu, it’s no surprise that there are plenty of [potentially] gluten-free options to choose from. The extensive gluten-free selection includes salads, burgers, steaks, pasta, tacos, corn tamale cakes, Shepherd’s pie, and even two gluten-free cheesecakes for dessert.

Additionally, you can eat the French fries as my server told me all fries are cooked in a dedicated fryer at the Cheesecake Factory (no worry of cross-contamination in the deep fryer). Of course, check with your Cheesecake Factory location to confirm the status of the fryer.

The Cheesecake Factory says it cannot guarantee anything will be 100 percent gluten free since the food is prepared in a shared kitchen. I was hoping for the best and bringing along my trusty Nima Sensor.

I ordered the following dishes, all specified to be gluten free upon request (and all of which involved me having a lengthy conversation with my server to discuss the seriousness of my “gluten allergy“):

Here is how each item fared against the Nima Sensor and some commentary about each. As you’ll see, you win some, and you lose some.

The Mexican chicken lettuce wraps seemed safe (although you can never assume). Inside each lettuce cup is lightly seasoned chicken and fresh veggies. I tested the wraps, and they tested fine with the Nima Sensor. I thought the Mexican lettuce wraps were tasty and healthy, and I recommend them, mainly if you’re eating on the lighter side.

This gluten-free pasta looked beautiful when it arrived at my table. Before eating, I tested the pasta, and guess what? The Nima Sensor found gluten.

Seeing that prompted me to ask my server, again, if the gluten-free pasta was cooked in the dedicated and clean pasta water. My server said he “thought” it was but said he would check what went wrong.

Of course, they tried to make me a new pasta; unfortunately, the second pasta dish tested positive for gluten too.

According to the Nima Sensor app, no pasta dish at the Cheesecake Factory has ever passed the Nima Sensor test. Nor has the sweet corn tamale cakes or any salad dressing – beware!

I decided to nix pasta, and my server brought me a second soft chicken taco dish.

The next item I tested for hidden gluten was the Godiva Chocolate Cheesecake. I was very hesitant to order this cake. It’s displayed in the same display case as all the other cheesecakes. The gluten-free cheesecakes are on the top shelf (so no other cake crumbs drip on them), but they are still exposed to cross-contact.

I asked my server a few more questions before ordering it, including:

I heard all the right answers, but I was still uncomfortable with the risk of cross-contamination inside the display case.

I then asked if it was possible if he could get me a slice that wasn’t in the display case; this way, I would know it would be safe. My server didn’t think he could do it, but in the end, the manager went and got a slice of the cake for me herself and told me it came from a clean, untouched cheesecake in their back fridge/freezer (not the cheesecake from the display case).

I suggested that in the future, they consider offering to get their “true allergy” customers a slice of a fresh cheesecake (one not in the display case) upon request. Wouldn’t that be great if that became the standard procedure?

I used my Nima Sensor to test the Godiva Chocolate Cheesecake and confirmed that it’s gluten free (contains no gluten ingredients). Nima Sensor did not find any hidden gluten.

You can watch me do the test live on Facebook in this video:

After I did the Facebook Live test, someone on my Facebook page commented that Godiva Chocolate might not be gluten free, and the Godiva website, at the time, said its products were not free from gluten.

However, as of December 2019, Godiva updated its allergen statement online to say that the Godiva Chocolate Cheesecake is certified gluten free. Here is a screenshot of the exact message:

As noted in my Facebook Live test, the Nima Sensor did not find gluten in the cheesecake (and now we understand why), and I felt fine after eating it (my personal experience only).

Recommendations for Eating Gluten Free at the Cheesecake Factory