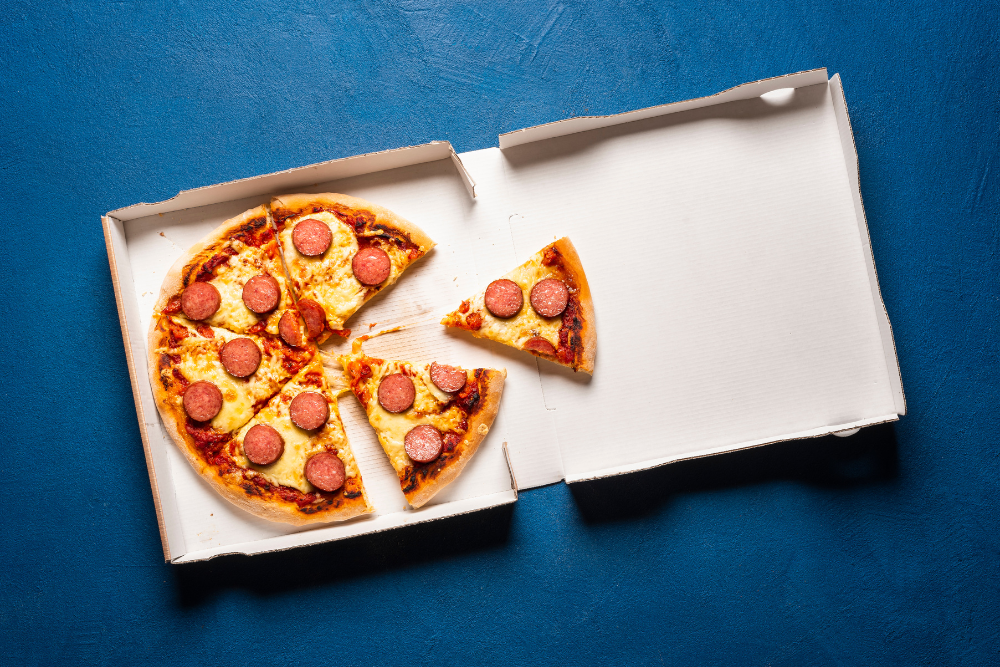 In this post, I discuss why many popular chain pizza restaurants offer gluten-free pizza that they don’t recommend for people with celiac disease and gluten intolerance. I share why this is a dangerous practice and how you can protect yourself from getting sucked into confusing marketing messages from Domino’s, Little Caesars, Papa John’s, Papa Murphy’s, and Pizza Hut. This post may contain affiliate links. Please see my disclosures.

In this post, I discuss how the top five pizza chain restaurants – Domino’s, Little Caesars, Papa John’s, Papa Murphy’s, and Pizza Hut – make gluten-free pizza that they tell gluten-free customers with celiac disease and gluten intolerance not to eat.

Such mixed messages are confusing to the gluten-free community for several reasons:

(1) When a company advertises a product as “gluten free,” people who rely on gluten-free products, like those with celiac disease and gluten intolerance, should be able to eat it safely. If a restaurant markets a dish as gluten free, it better be gluten free. Period.

(2) People who aren’t educated in the perils of gluten cross-contamination may not understand the nuances associated with the gluten-free diet, including the risks of eating “gluten-free” pizza that is likely contaminated with gluten during the preparation and baking processes.

The truth is pizza restaurants are trying to cash in on the multi-billion-dollar gluten-free “trend” without considering the needs of the people who rely on gluten-free food for sustenance. You can’t blame them for wanting a slice of the $4.3 billion gluten-free market, which will reach an estimated $7.5 billion by 2027.

I find it inexcusable that trusted gluten-free brands, like Udi’s, are supplying their products to Pizza Hut and Papa Murphy’s, knowing that these restaurants don’t offer safe foods to the gluten-free community.

Pizza Hut is making a mockery of Udi’s. The pizza chain proudly tells the world that its crusts are certified gluten-free, but it delivers an unsafe end-product to the community. Gluten-free suppliers should take some responsibility and put their customers above profits.

Furthermore, the FDA should take a hard look at how pizza restaurants use the words “gluten free” to draw attention to their brands but then turn around and warn the gluten-free community not to eat these products. Surely someone at the FDA would find this bait-and-switch behavior deplorable.

Currently, the FDA says restaurants making a “gluten-free” claim must abide by the same rules for gluten-free labeling. Really? I’ve never seen a product labeled “gluten free, but not suitable for people with celiac disease and gluten intolerance.”

The gluten-free community should be mindful when eating at the following pizza restaurants and take each restaurant’s warning to heart:

While Domino’s warns gluten-free patrons not to eat its pizza, it might be the only pizza chain that I would [maybe] consider eating at for the following reasons:

(2) Domino’s says its crusts are made in a certified gluten-free facility; keep in mind, however, that the rest of the pizza is prepared in a shared kitchen where gluten is present.

(3) Domino’s says no airborne flour is present in its kitchens since all of its pizzas are hand-tossed and hand-stretched using cornmeal, not flour.

I spoke with an employee at Little Caesers who confirmed the restaurant offers a gluten-free crust option. It’s prepared in a deep-dish pan using the same prep area and ovens used to prepare other pizzas.

When I went to “pretend” order a pizza online, Little Caesers dished up the following warning, “We proudly make our wheat-based pizza dough fresh daily in each of our Little Caesars kitchens and are happy to now offer a gluten-free crust that does not contain wheat, rye, or barley. Since all of our fresh dough products are made in the same kitchen, there is potential for gluten exposure. Therefore, we do not recommend this pizza crust for customers with celiac disease.”

While the crust is made in a dedicated gluten-free facility, Papa John’s says it cannot recommend its gluten-free pizza for people with “celiac disease or serious gluten intolerance.”

Papa John’s said in a press release that while its gluten-free crust is prepared in a separate, gluten-free facility before being shipped to stores, it’s probable that the pizza will come in contact with gluten when it’s prepared.

Papa Murphy’s pioneered the concept of a Take ‘n’ Bake pizza where the restaurant prepares the pizza, but you take it home to bake. While the business model seemed to present a unique opportunity for Papa Murphy’s to get gluten free right, like its predecessors, it can’t seem to figure out how to get it right.

Papa Murphy’s says on its website that its gluten-free crust, which it launched in September 2014, is “topped in a shared kitchen that also handles gluten-containing ingredients,” adding, “We do not assume responsibility for any sensitivity or allergy caused by our products.”

Papa Murphy’s gluten-free Take ‘n’ Bake pizza is made with Udi’s crust, which, if you ask anyone on a gluten-free diet, they will skip for that reason alone.

The company says its gluten-free pizza is still made with Udi’s pizza crust, but it doesn’t take any other precautions to ensure the pizza is suitable for people with celiac disease and gluten intolerance.

I suspect Pizza Hut discontinued its certified gluten-free pizza option due to a lack of sales, probably because they used Udi’s crust, and well, there are better options.

As mentioned, if I had to order gluten-free pizza, the only pizza restaurant of the bunch that I’d consider is Domino’s. And even that’s a stretch.

For now, I suggest the gluten-free community stand in solidarity and quit ordering unsafe pizza from chain pizza restaurants because, when you do, you reward them for putting the health and safety of your fellow gluten-free friends at risk.