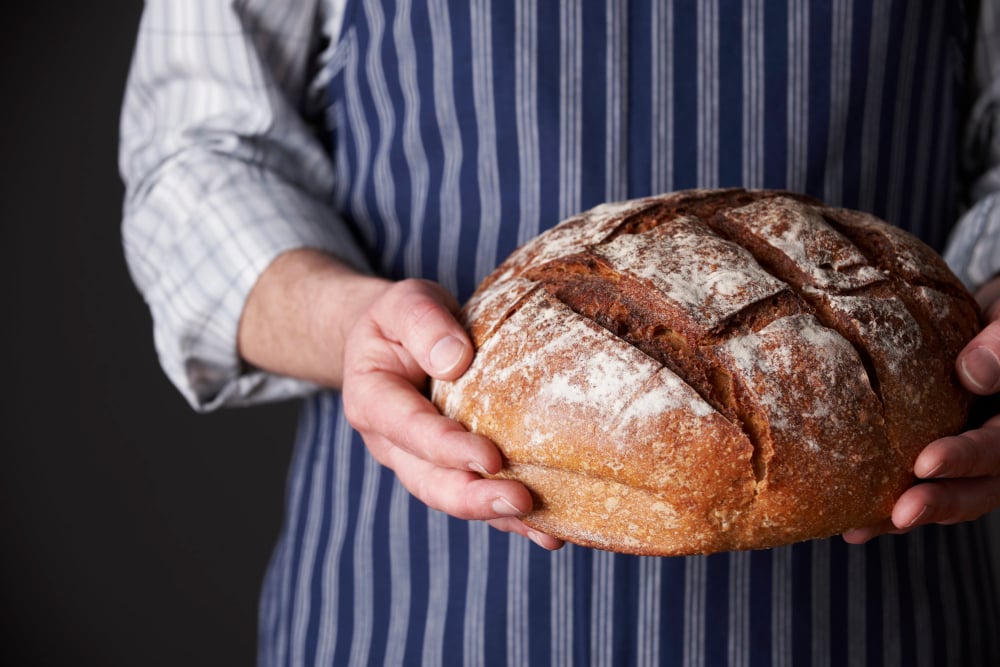 You may be wondering, “Is sourdough bread gluten free?” maybe because a friend told you it was safe to consume even if you have celiac disease. In this article, I will set the record straight and explain why sourdough bread is not gluten-free safe. This post contains affiliate links. Please read my disclosures.

Probiotics have been known to support gut health and can help the body better absorb nutrients from food. On top of that, sourdough bread is easier to digest because the fermentation process helps to break down the bread into easily digestible bits.

Looking for a Gluten-Free Sourdough Bread?  Visit Bread Srsly and get $5 off your first order with the coupon code goodforyou10.

However, like anything, there are some exceptions to this rule, as well as ways to safely enjoy gluten-free sourdough bread.

How Sourdough Bread is Made

It’s important to understand how sourdough bread is made, which can shed light on why so many people mistakenly think it’s safe to consume on a gluten-free diet.

For thousands of years, bread production relied on the use of a sourdough starter as the leavening agent for bread.

Only in the past 150 years, with the advent of baker’s yeast as the primary leavening agent in bread, that bakers abandoned this traditional slow-baking process. In fact, the use of a sourdough starter, which is a biological leavening agent, is near extinct in a world where bread is baked fast and cheap.

Why Do People Think Sourdough is Gluten Free?

Many people think sourdough bread is safe for someone on a gluten-free diet to eat because they say the lactobacillus in sourdough breaks down the gluten into small enough bits that may be tolerated by someone who cannot normally tolerate gluten.

This is dangerous thinking, and one cannot assume that sourdough bread made by today’s bakers with today’s wheat flour is gluten free by any stretch of the imagination.

A 2010 study published in Clinical Gastroenterology and Hepatology wanted to understand if gluten0free people could tolerate sourdough bread. This study, mind you, created a lot of confusion and misinformation within the gluten-free community.

In the study, researchers randomly assigned 16 celiac disease patients (ages 12–23 years old) into one of three groups for 60 days. All patients were in good health and had been following a gluten-free diet for at least five years.

Group 1:  The first group was assigned to consume 200 grams per day of natural flour baked goods containing between 80-127 parts per million (ppm) of gluten.

Two of the six patients in Group 1 (the ones who consumed 200 grams per day or 80-127 ppm of gluten) had to discontinue the challenge because the gluten was making them sick! The patients in this group all experienced increased levels of anti-tissue transglutaminase (tTG) antibodies and small bowel deterioration.

Two patients in Group 2 (the ones who ate the “extensively hydrolyzed flour baked goods” at 2480 ppm residual gluten) had no clinical complaints but developed “subtotal atrophy” (aka, damage to the small intestine consistent with celiac disease).

The five patients in Group 3 (the ones who ate the “fully hydrolyzed baked goods”) had no clinical complaints, their levels of anti-tTG antibodies did not increase, and their small intestinal mucosa was unchanged.

This led researchers to conclude that “a 60-day diet of baked goods made from hydrolyzed wheat flour, manufactured with sourdough lactobacilli and fungal proteases, was not toxic to patients with celiac disease.”

Why We Shouldn’t Take this Study at Face Value

While the study’s conclusion makes it seem like people with celiac disease have permission to eat sourdough bread, the reality is this plan is extremely flawed in real world applications for many reasons.

First, you must remember that the process of getting fully hydrolyzed wheat flour is very hard to find. Almost all the bread, even the sourdough bread found in bakeries and grocery stores, is not made this way and instead, the vast majority of bread requires fast-acting chemicals and/or baker’s yeast as their leavening agents.

Second, you might be wondering if you could make your own sourdough bread with wheat flour at home. Sure, you could. However, the formulation used in the study is complex and one that would be quite difficult to replicate at home. Plus, why introduce wheat flour into your kitchen when you’ve worked so hard to get the gluten out of your kitchen and life? Do you want wheat flour flying everywhere in your gluten-free kitchen? No thanks!

Third, this study only followed 16 patients with celiac disease for 60 days, and only five of them consumed the sourdough bread that contained 8 ppm of gluten. Take the small sample size and short timeframe used in this study with a huge grain of salt.

Forth, if you were to make your own sourdough bread using wheat flour, how would you know if it contained less than 10 ppm of gluten (or even less than 20 ppm, the amount the FDA says someone with celiac disease can tolerate)? I don’t know of any readily-available consumer technology available that will indicate how many parts per million gluten is found in a particular food item. Even the Nima Sensor, a portable gluten-detecting device, cannot tell you how many ppms of gluten a product contains.

BOTTOM LINE:  Eating sourdough bread when you have celiac disease is much too risky and likely contains detectable amounts of gluten. Don’t do it.

The good news is you can still enjoy sourdough bread if you eat one made with gluten-free flours.

I’ve sampled Bread Srsly gluten-free sourdough bread and it tastes like legit sourdough and is good, albeit never as good as the gluten-y sourdough bread I remember. You can use my coupon code – goodforyou10 – to get $5 off your first order. Sweet!

If you’re really motivated, you can make your own gluten-free sourdough starter at home with brown rice flour and water. It’ll take you about a week to make the starter, but once you have it, you can use it as a natural leavener in your own bread or other baked goods. Follow my step-by-step instructions for making a gluten-free sourdough starter (mine is pictured below).

The bottom line is that sourdough bread is not gluten-free safe. While the bacteria in sourdough do help to break down the gluten proteins (not fully, but some), thereby making sourdough bread more digestible, it’s much too risky for someone on a gluten-free diet to consume.

However, if you have celiac disease or are on a gluten-free diet for another reason, avoid all sourdough bread unless it’s made from gluten-free flour and prepared in a safe kitchen free from gluten cross-contamination.