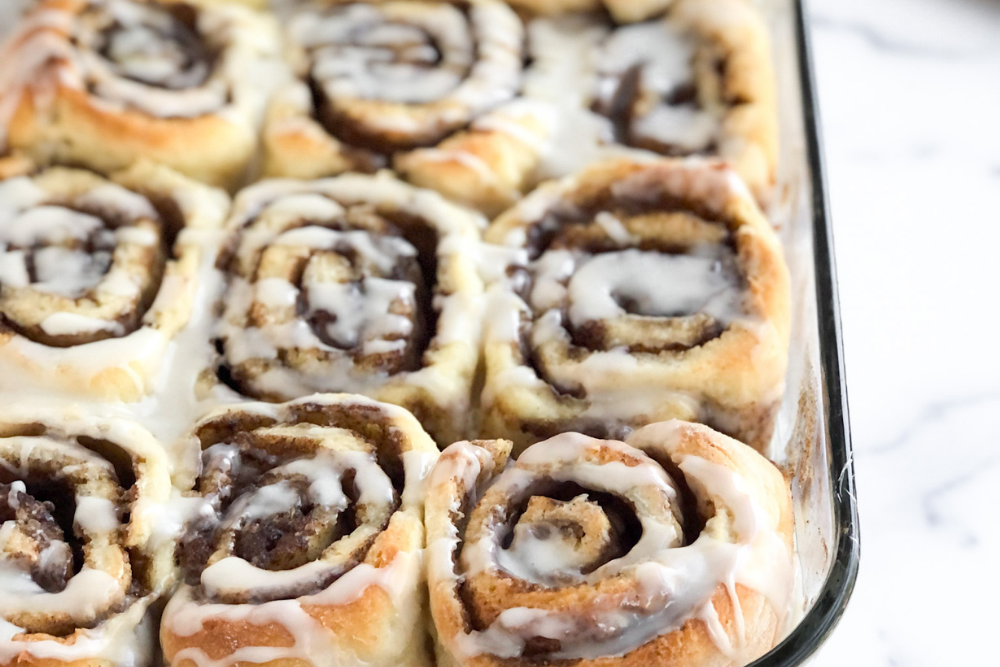 This post features my gooey gluten-free cinnamon rolls recipe, a recipe I “borrowed” from a new friend (Lorraine) who you’ll learn more about in this post. These gluten-free cinnamon buns require some preparation, but the end result is worth every bit of effort you put into making them. This post contains affiliate links. Please see my disclosures.

None of these recipes tasted good enough to share on my blog, and it’s why, for the 6+ years I’ve been blogging here at Good For You Gluten Free, there is not a gluten-free cinnamon bun recipe to show for it. Until now…

Earlier this year I attended and spoke at the Nourished Festival, the largest gluten-free expo in the U.S. The 2020-21 festivals have been virtual, and this gave me the opportunity to watch some of the other speakers who I might have otherwise missed.

One of those speakers was Lorraine Fagela, the founder and recipe developer behind Lorraine’s Gluten Free. Lorraine hosted a cooking class and showed us all how to make gooey gluten-free cinnamon rolls – and gluten-free babka – using her amazing sweet dough recipe.

Knowing how hard it is to master gluten-free cinnamon rolls, I watched her class intently, eager to learn her tricks.

What I learned is that the flour you use matters. Cinnamon rolls, and other sweet dough yeast recipes, require special flour beyond basic gluten-free flour blends.

Lorraine had been running a bakery in Maine for many years, but she recently launched her gluten-free flour business in late 2020 with two flagship products, an all-purpose gluten-free flour and a sweet dough mix.

While the all-purpose flour can help you recreate cakes and cookies, Lorraine’s sweet dough mix should be purposely used to create any yeasty sweet bread recipes such as cinnamon rolls, donuts, beignets and babka.

The sweet dough mix is meant to be prepared following the instructions listed on the packaging as it already contains sugar, flour and yeast. You just need to add the wet ingredients (eggs, milk, butter, etc.) to bring it all together.

I’ve used Lorraine’s Sweet Dough mix to create some of my best work, including the best gluten-free cinnamon buns I’ve ever made or had.

The cinnamon rolls were sweet, gooey, doughy and had the perfect taste and texture. They tasted amazing both warm and cold, whereas most gluten-free cinnamon roll recipes you’ll find using all-purpose GF flours only taste good warm. I still can’t believe these cinnamon rolls didn’t become dry and gritty when served chilled.

Now let’s make those unforgettable gluten-free cinnamon buns. I promise you, once you try this recipe, and Lorraine’s Sweet Dough mix, your gluten-free baking adventures will be forever changed for the better.

How to Make Gluten-Free Cinnamon Rolls

First you’ll need to purchase a bag of Lorraine’s Sweet Dough Mix. You’ll use the entire bag to make the cinnamon rolls, and once you make the dough, you can divide it in half and make a batch of eight cinnamon rolls along with another pastry, such as gluten-free babka.

The first time I made this recipe, I made one huge batch of cinnamon rolls, but the next go round, I used half the dough for cinnamon rolls and half for chocolate babka.

You’ll prepare the sweet dough exactly the same regardless of which recipe you’re making. To make your dough, combine the following wet ingredients in a bowl:

In a second bowl (the one attached to your standing mixer), add the entire bag of Lorraine’s Sweet Dough mix, including the three included yeast packets. Whisk to combine.

Add the milk and butter, along with 2 lightly beaten eggs, to the dry ingredients and mix everything on low speed until combined, then mix on medium speed for five minutes to really blend the dough. The dough will be sticky but smooth.

Form dough into a ball and place it in a lightly-greased bowl. Cover the bowl with plastic wrap and allow it to rise for about 2 hours in a warm place. I use a warming mat to help keep my dough warm as it rises since my house is always so cold.

Once the dough has doubled in size, place it in the fridge to chill. Chilled dough is much easier to work with and less sticky. Chill the dough for two hours or overnight.

After the dough has chilled, you’re ready to assemble whatever recipe you’re making. As I mentioned prior, I divide the dough in half and use half to make eight large cinnamon rolls, and then use the remaining dough for a separate recipe, like a loaf of gluten-free chocolate babka.

Prepare the filling before rolling out the dough. A traditional cinnamon roll filling contains brown sugar, cinnamon and lots of butter.

If you’re using a full batch of the dough, combine the following ingredients in a bowl, mixing it together until well combined. (Be sure to adjust the amounts if making a half batch.)

Add the chilled dough to a generously floured surface (use any gluten-free all purpose flour or 1-to-1 flour you have in your pantry). Knead the dough, incorporating additional flour until the dough is no longer sticky (or just slightly sticky).

Roll the dough into a large rectangle (18×10″ if using the entire batch – or adjust size for a half batch). If you’re making a full batch, you may want to work the dough in half portions anyway just to make the dough easier to work with.

Spread the butter-sugar-cinnamon filling evenly over the dough using a butter knife or icing spatula. Be gentle with the dough to prevent tears.

Gently roll the dough into a jelly roll and pinch the seams together to hold it place. Cut the roll into 16 cinnamon rolls (8 for a half batch), using a serrated knife.

Add rolls to a lightly-greased baking dish, either a 9×13″ for a full batch, or an 8×8″ for a half batch. Cover with plastic wrap and allow the rolls to rise in a warm place until they double in size, about 1 – 1.5 hours.

Place the risen rolls (uncovered) in a 350º F oven and bake for about 25-30 minutes or until they start to lightly brown on top.

No cinnamon roll recipe would be complete without a sweet glaze topping. To make the sugar glaze, combine the following ingredients in a bowl:

Drizzle the glaze over the slightly cooled rolls. Then get ready to dig in to these warm and ooey gooey gluten-free cinnamon rolls once and for all, after all, you worked hard to make them!

Below are answers to your most frequently asked questions:

Can you make this recipe egg free? I haven’t tried making it egg free, but like many recipes, you can use an egg replacement or flax eggs (1 flax egg is 1 tbsp flaxseed meal combined with 3 tbsp warm water). I think you’ll still get great results without eggs.

Can you use another gluten-free flour blend? No! Lorraine’s Sweet Dough mix already contains sugar and all the flours, starches and leaveners needed make this recipe. You must use this mix to make these exact cinnamon rolls.

Can you make this recipe less sweet? This recipe is sweet, but keep in mind, cinnamon rolls are meant to be indulgent. I added all sweet things to this recipe to make them taste and feel like the cinnamon rolls you remember in your pre-gluten-free days. Remember, the flour mix already contains sugar, so that can’t be adjusted, but you can lighten up the recipe by using a sugar-free brown-sugar substitute for the filling and skipping the sweet glaze on top.

Can I make the cinnamon rolls the night before? Yes, once the rolls have risen, you can place them in the fridge and bake them fresh the next morning.

How do you store leftover cinnamon rolls? If you make the big batch of rolls, you will surely have leftovers. Just cover the dish with plastic wrap and place it in your fridge. I actually enjoy eating leftover cinnamon rolls cold. They don’t even need to be warmed to taste great. Of course you could always heat a roll in the microwave for a few seconds for a warm and gooey treat.

This indulgent cinnamon roll recipe is loaded with sugar and calories and guess what, I don’t care. If you’re going to eat cinnamon rolls, do it right. With Lorraine’s Sweet Dough mix, your cinnamon rolls will be perfection!

Leave a comment to tell me if you had the opportunity to try these gluten-free cinnamon rolls and what you think. 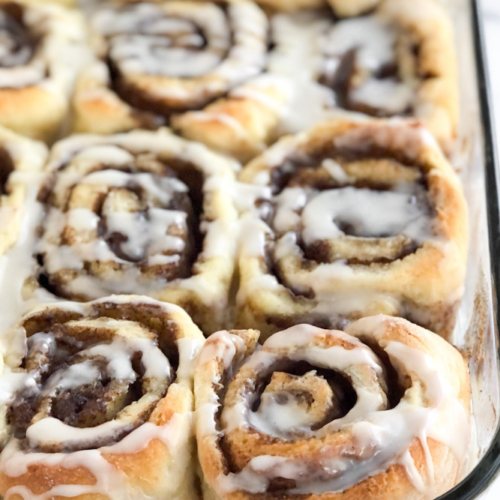 Get ready to make the best gluten-free cinnamon rolls you've ever had. They are sweet, gooey and taste great warm or cold. Make sure you use Lorraine's Sweet Dough mix as mentioned in this post. You CANNOT use an all-purpose or 1-to-1 GF flour in this recipe.
5 from 3 votes
Print Pin Rate
Course: Breads, Breakfast, Dessert
Cuisine: American
Keyword: cinnamon rolls
Prep Time: 6 hours
Cook Time: 25 minutes
Servings: 16 rolls
Calories: 525kcal
Author: Jenny Levine Finke

This recipe is “borrowed” from Lorraine’s Gluten Free. Make it dairy-free by using dairy-free milk, butter and heavy cream. Silk makes a dairy-free heavy cream alternative. You could also use a canned coconut cream alternative in lieu of heavy cream. You must use Lorraine’s Gluten-Free Sweet Dough mix for this recipe. It won’t work with other flours. Remember, the sweet dough mix already contains sugar, binders and flours needed for the dough to come together. Be sure to leave yourself plenty of time to complete this recipe. It requires about 3-4 hours of rise time, 2 hours of chill time, 30 minutes for baking, plus time for the rolls to cool a bit before adding the sugar glaze.