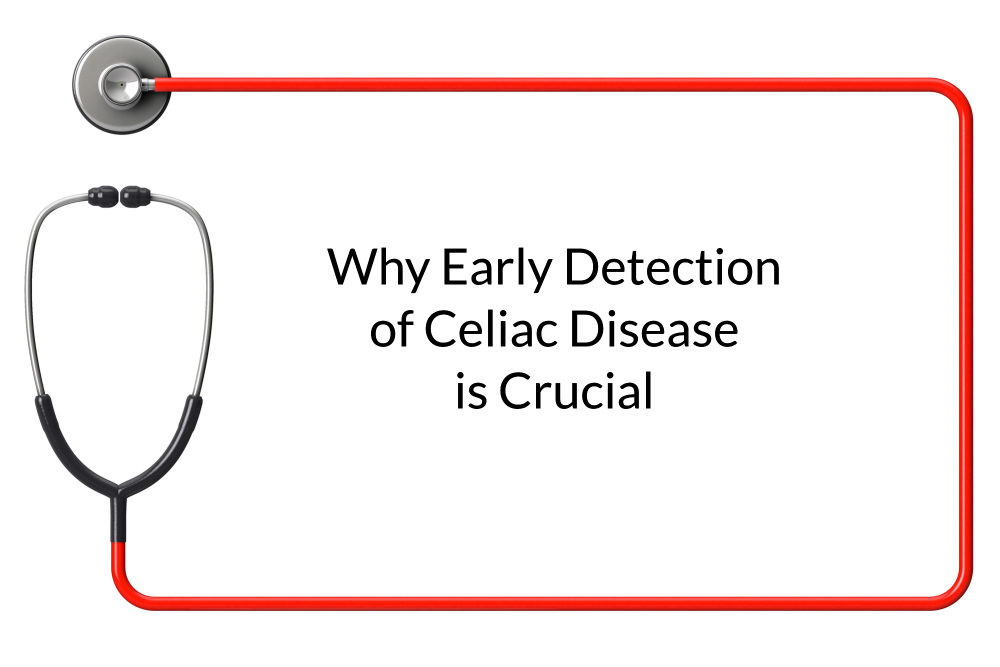 Why is celiac disease so hard to detect early, and why is early detection of the gluten disorder so crucial? In this article, we’ll discuss these topics and more. Please read my disclosures.

Early detection of celiac disease has baffled researchers for decades, particularly in patients with silent or asymptomatic celiac disease.

Unfortunately, in order to diagnose a patient with celiac disease, the patient must have what is known as “total villous atrophy.” This means the microvilli, which are the hair-like follicles surrounding the small intestine responsible for absorbing nutrients, are flattened and damaged.

In other words, doctors only discover a patient has celiac disease once the damage is done.

But are there warning signs that would allow for the disorder to be detected sooner? And is the limited diagnosis criteria (total villous atrophy) too limiting in the diagnostic process?

In this article, I talk about why I believe early detection of celiac disease is crucial to the health of millions of Americans. I also offer up ideas for how we can better detect and diagnose celiac disease, particularly in at-risk populations, and what doctors can look for to detect celiac disease before the damage is done.

I am not a doctor. Information in this article is either with citation or is of my own opinion. Please consult your healthcare provider before making any changes to your diet and for a proper diagnosis.

There are several reasons why early detection of celiac disease is crucial:

(1) We need to arrest disease before it starts

This means millions of people with mild to moderate villous atrophy may be on the path to an eventual celiac disease diagnosis without even knowing it!

This also explains why the vast majority of people diagnosed with celiac disease are diagnosed as either an adult, middle aged and into their senior years.

These individuals may have had mild villous atrophy, but it took them an average of 6-10 years (sometimes more) to officially get diagnosed with celiac disease.

This means the disease was allowed to progress, damage the intestinal lining, cause nutritional deficiencies, wreak havoc in the body, put someone at higher risk for accumulating other diseases, and ensures someone will feel sicker and sicker before finally getting help.

(2) The damage can be life-altering

Undiagnosed celiac disease in children can lead to growth and development disorders (which are non-reversible), and puts children at greater “risk of malignant diseases and the emergence of mental disorders.”

This is why it’s essential that a growing and developing child is able to properly absorb nutrients, which is virtually impossible to do with a damaged small intestine.

This study offers several important findings to understanding the critical nature of early detection in children:

(b) The study’s findings also suggest the case for more widespread screening for celiac disease in children. Screening should be done throughout adolescence (and even into adulthood), as nearly half of diagnosed participants developed celiac disease after the age of five.

(3) Too many people remain undiagnosed

About one percent of the population or 1 in 100 people have celiac disease, however, the kicker is that 80 percent of people with celiac disease don’t know they have it, and some estimates put this number even higher. This adds up to at least 1.4 million people in the U.S. who have no clue that celiac disease is raging inside of them.

Without better screening techniques and recognition of celiac disease symptoms beyond digestive disorders, I don’t know that people will be able to detect the disease early enough before it turns into a more serious disorder(s).

Early detection of celiac disease is critical to offering better outcomes to patients. Early detection is essential to preventing the development of more serious conditions and even early death.

The sooner the diagnosis, the sooner the patient can arrest the damage and begin properly managing their disease via a gluten-free diet.

Celiac disease is the most prevalent digestive disease in the U.S., yet it receives the least amount of funding of all digestive diseases. We need this to change and help researchers understand the just how pervasive the disease has become.

In order to fully understand the reach of celiac disease, we need to expand the parameters of diagnosis beyond full villous atrophy.

I’m not a doctor, so I don’t know the answer to this issue, but it’s something that I want the celiac disease research community to consider. Let’s not wait for total villous atrophy to make the diagnosis.

What We Need to Do

We need to look at a variety of factors to properly detect and diagnose celiac disease early on.

Research published in the American Journal of Gastroenterology (2006) says that the diagnosis of early developing celiac disease should be based on a combination of clinical features, histology, serology, and genetics. I couldn’t agree more.

We also need to be cognizant that histology (biopsy of tissue) isn’t perfect either. Celiac disease detection via intestinal biopsy can be marred by errors.

In one study, researchers said that that “biggest problem” in the diagnosis of celiac disease is proper “interpretation of a biopsy specimen,” as well as analyzing an “adequate” number of samples and “poorly oriented biopsies.”

The American Journal of Gastroenterology (2006) reports that “conventional histology is not anymore a gold standard in the diagnosis” and suggests that the diagnosis criteria be revised.

(It’s important to note, however, that just because you have a celiac gene doesn’t mean you will have celiac disease. It just means you could have it; however, some sort of trigger must “turn on” the gene.)

I believe we need guidelines for monitoring the early onset of celiac disease, particularly in genetically predisposed individuals. Should these individuals be tested yearly, every 2-3 years, or what given that celiac disease may “turn on” at any time.

The prior mentioned Denver study sheds some light on this too. Nearly half of celiac diagnosed participants in the study developed celiac disease after the age of five, but they all had tested negative for the disorder prior to the five year mark.

There’s no doubt that the earlier we can detect and diagnose celiac disease, the better the long term outcomes will be for patients. However, the current testing methods, while viable, need further research and methodology.